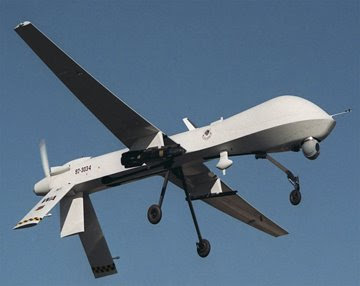 Posted by Steve Douglass at 5:25 PM No comments:

Made in China/ Design Stolen from USA

One of the many entertainments at this week’s Air Show China will be trying to sort out projects from pipe dreams in the unmanned aerial vehicles arena.

The halls of the show are littered with unmanned aerial vehicles of all shapes and sizes, including a bright yellow flying saucer. Others, such as the Warrior Eagle pictured in the artist’s illustration above, and in model form below, also have more than a hint of sci-fi alien invasion paranoia.

That China is working on a swath of UAV projects from tactical to strategic applications looks clear - how many of these are visible in terms of what is on display at the 7th Air Show China, which'opens formally November 4,'is less so. The Chinese model makers’ guild, however, is likely bulking up its pension fund very nicely.

On the AVIC 1 stand as well as the Warrior Eagle - intended for the strike and air defense suppression roles - there is also the Long Haul Eagle - to provide intelligence, surveillance and reconnaissance (ISR) support.

Tucked in at the back is the Tian Yi-3, described as a ‘conceptual UAV’ for ISR applications. The model'was also displayed at the 2006 show.'The concept - perhaps curiously - shows a strong resemblance to a UAV dubbed Soar Dragon (Xianlong). AVIC 1 includes Chengdu, the company which is reported to be developing this air vehicle.

Footage of Soar Dragon, which is similar in configuration and role to the U.S Global Hawk, was recently posted on the internet appearing to show the UAV undergoing taxi trials - conceptual ones, of course.

Posted by Steve Douglass at 5:25 PM No comments:

Guy Builds F-35 Fighter Jet On His Own 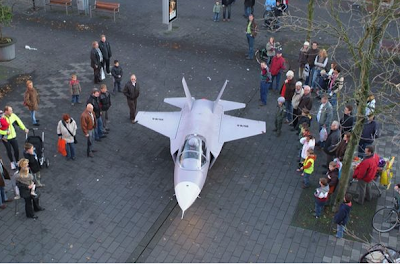 Guy Builds F-35 Fighter Jet On His Own: "Arthur van Poppel took our Guide to Build Your Own F-35 Lightning II Fighter Jet too seriously and actually built the damn thing. Sure, it is a scaled version and it doesn't come with a demonic helmet, but you can actually drive the thing like a car and the level of detail is absolutely amazing.

Posted by Steve Douglass at 5:33 AM No comments: