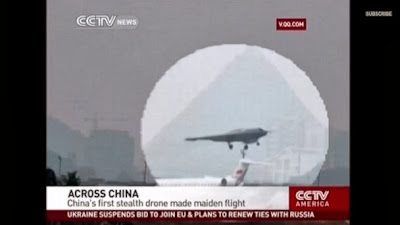 “The successful flight shows the nation has again narrowed the air-power disparity between itself and Western nations,” China Daily newspaper said. The newspaper attributed confirmation to photographs taken by military fans.

Military expert Andrei Chang told the AFP the design appeared a “little naïve,” but if successful would indeed mark a milestone for China.


Lijian, or Sharp Sword, was reportedly produced by the Aviation Industry Corporation of China, but the information office has not yet confirmed the test.

News of the 20-minute test on Thursday in southwest China and photographs of Lijian first appeared on cjdby.net, a popular military forum.

Online reports suggest it is a delta-wing, single engine drone. It has been compared to both the Northrop Grumman-made X-47 series used by the U.S. Navy and the Russian MiG Skat drone.

Wang Ya’nan, the deputy editor in chief at Aerospace Knowledge Magazine, told China Daily the drone seems to be equipped with the RD-93, a Russian turbofan engine originally designed for a fighter jet.

“The drone, which is capable of flying undetected at high altitudes while providing high-resolution video and other intelligence, will let maritime departments keep abreast of developments in the East and South China seas and will help Beijing make accurate decisions when dealing with territorial disputes with its neighbors, ” Xu Guangyu, a former PLA major general told the SCMP.

The most recent Pentagon report on the Chinese military, published in May, alluded to Lijian.