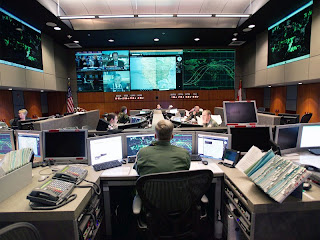 Buried deep beneath Cheyenne Mountain in Colorado, the North American Aerospace Defense Command (NORAD) has monitored the skies above North America for more than 50 years. During the height of the Cold War, NORAD was the US and Canada’s early warning system for a Soviet 1st nuclear strike.

Following 9/11, NORAD moved to improve its ability to detect and monitor aircraft originating from within the US and Canada. One of those efforts, funded by the US Air Force, is development of the Battle Control System-Fixed (BCS-F). BCS-F integrates data from civil air traffic sensors, as well as airborne, ground and naval sensors, into an integrated air picture that allows commanders to better monitor the North American airspace.

The BCS-F has command and control nodes at NORAD posts in Alaska, New York state, Washington state, Hawaii, and Canada.

Among other things, BCS is designed to help detect off-course aircraft like the ones that struck the World Trade Center in 2001. Using high-speed servers that correlate data from radar and flight control sources, BCS is intended to deliver a heads-up when something is wrong in the skies over North America.

“Each aircraft that is flying has to have [filed] an approved flight plan with the FAA. [BCS] takes the data from the FAA and the data from radar and datalinks and correlates it to make sure it’s flying within its flight plan. When it deviates by a certain amount, it alerts the operator to determine what to do next.”

An effort would be made to establish radio contact with a deviating flight, but the ground commander would have the option of scrambling jets to establish visual contact if necessary. Such a tactic could be used to intercept a hostile flight or provide aid to one in distress, De Sollar said.
Posted by Steve Douglass at 4:36 PM No comments: