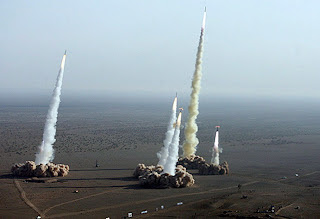 TEHRAN, Iran (CNN) -- Iran has test-fired nine missiles in response to what it says are threats from Israel and the United States, state-run Iranian media says.


The new version of the Shahab-3 missile is capable of reaching its main regional enemy Israel, Iran says.
1 of 2

The exercises come a month after Israel conducted a military drill in the eastern Mediterranean involving dozens of warplanes, and the latest Iranian activities prompted concern from Israel and condemnation from the United States.

Iran occasionally tests missiles, but this firing comes amid international tensions over its nuclear aspirations.

"The war game was aimed at improving the combat readiness of Iran's armed forces. The 2,000-kilometer-range Shahab-3 missiles were tested to demonstrate Iran's capability in hitting its enemies accurately at the early stages of their probable attacks against the Islamic Republic.

"Domestic and foreign political and military analysts believe that Shahab-3 is able to reach targets in the occupied lands in case of the Zionist regime's probable attacks against Iran's nuclear sites," the Islamic Republic News Agency said. Watch footage of the missiles being fired »

Iran's Press TV said the Iranian forces "successfully test-fired new long and mid-range missiles." It mentioned the Shahab 3, "which can hit any targets within a range of 2,000km." It said the Shahab 3 "is equipped with a one-ton conventional warhead."

"Nine highly advanced missiles with improved accuracy were simultaneously tested including the Zelzal and Fateh missiles with ranges of 400km and 170km respectively."

World powers, which have long suspected Iran is intent on building nuclear weapons, have offered economic and other incentives in exchange for the suspension of its enrichment program.

Iran, which says its nuclear program is to produce energy, defends its right to proceed with enrichment.

Israel's military exercise over the eastern Mediterranean Sea in June was in part an effort to send a message that it has the capability to attack Iran's nuclear program.

It involved dozens of Israeli warplanes, including F-15s, F-16s and refueling aircraft, an official said.

The distance involved in the exercise was roughly the same as would be involved in a possible strike on the Iranian nuclear fuel plant at Natanz, a U.S. military official said.

In 1981, Israel attacked a nuclear facility in Iraq. Israel also struck a site in Syria that some say was a nuclear reactor under construction.

One Israeli Cabinet member, Shaul Mofaz, recently said the Jewish state "will attack" Iran if it did not halt its efforts to develop nuclear weaponry,

Last week, the Islamic Revolutionary Guard Corps commander, Gen. Mohammed Ali-Jaafari, said any strike against Iran's nuclear facilities would be regarded as the beginning of war.

At the same time, Iranian leaders are discounting the possibility of war. President Mahmoud Ahmadinejad, in Malaysia this week for a conference, told reporters Iran was trying to prevent but not foment confrontation.

"We are making all-out efforts to expand peace and security in the world. You should not be concerned about a new war," he said on Tuesday.

Mark Regev, spokesman for Israeli Prime Minister Ehud Olmert, said: "Israel seeks neither conflict nor hostilities with Iran, but the Iranian nuclear program and the Iranian ballistic missile program must be of concern for the entire International community."

The White House reacted strongly to the missile test.

Johndroe said that the U.S., Britain, France, Russia, China and Germany "are committed to a diplomatic path, and have offered Iran a generous package of incentives if they will suspend their uranium enrichment activities."

"They should also refrain from further missile tests if they truly seek to gain the trust of the world. The Iranians should stop the development of ballistic missiles, which could be used as
Posted by Steve Douglass at 5:17 AM No comments: