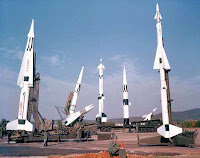 The Pentagon will soon release a strategy that formalizes a long-articulated position: the United States reserves the right to launch conventional attacks in response to the cyber kind. But figuring out who is behind such attacks may be difficult, or impossible.

"To say that cyberattacks can be acts of war, and that they can be met by kinetic responses, simply confirms a longstanding Department of Defense consensus," says Stewart Baker, a lawyer who was policy chief at the Department of Homeland Security for part of the Bush administration. "Neither of those statements make a strategy, however."

Baker adds that the threat "is much less effective than we'd like, because we largely lack the ability to identify who is attacking us in cyberspace. Until we solve that problem, we might as well claim that we'll respond to cyberattacks by blowing horns until our attackers' fortifications all fall down and their ships all sink."

READ THE REST OF THE STORY HERE
Posted by Steve Douglass at 10:05 AM No comments:

Was Annie Jacobsen's Area 51 claims based on pulp fiction?

Great article - here on how Annie Jacobsen's claims on Area 51 and Roswell may be related to a pulp-fiction Science Fiction novel.
LINK HERE

(CNN) -- A former associate of Osama bin Laden, described by authorities as a "Pakistan-based attack planner," has been arrested in Afghanistan, a spokesman for the NATO-led coalition said Thursday.

The International Security Assistance Force declined to identify the man, saying it was not releasing further information.

"It's part of an ongoing operation," Army Maj. Tim James, spokesman for ISAF's joint command, told CNN by telephone from Afghanistan.
The man was arrested along with two others described as "associates," according to ISAF, during a raid Wednesday in the northern province of Balkh, an insurgent stronghold that borders Uzbekistan.

He was captured during an overnight operation after he was tracked to a compound in Nahr-e Shahi, the statement said.
Posted by Steve Douglass at 5:19 AM No comments:

Editor's note: CNN's Tim Lister writes about the Middle East and South Asia.
(CNN) -- I never met Pakistani journalist Sayed Saleem Shahzad, but we exchanged e-mails about his work for Asia Times Online, and his remarkable scoops in interviewing some of the world's most wanted terrorists.

He was an investigative reporter in the truest sense, disappearing to remote areas of Waziristan for clandestine interviews, working contacts within Pakistan's byzantine security apparatus, delving into a murky world of conspiracies and shifting (often deadly) allegiances.
In the end, it was Shahzad's endless probing that probably killed him. On Sunday night, he was on his way from his home in the Pakistani capital to a TV station to do an interview on the security threats faced by Pakistan.

He never got there. His body was found Tuesday some 250 kilometers (155 miles) away, close to his car. It showed signs of torture, according to Pakistani media reports.
You could pick any number of stories that Shahzad had written as Asia Times' Pakistan bureau chief that would have embarrassed or infuriated someone.

Long-time colleague Zafar Mehmud Sheikh told CNN-IBN after his murder: "He was an extremely critical writer. His writings in Asia Times were not liked by many circles, especially power corridors, and that's why he was always getting threats, direct life threats not from one side, from all sides."
Many Pakistani journalists believe he was killed by elements within the Pakistani intelligence service, the ISI, because of his frequent reporting about co-operation and contacts between Pakistani security officials and extremist groups. He is known to have received several warnings about his reporting from the ISI. But it is equally possible that his reporting had gone too far for the likes of one of the many militant groups he was in touch with.
Shahzad had recently turned several controversial pieces about the attack by militants on the Pakistani naval base in Karachi.
One of them began in a way that would not have gone well at ISI headquarters, describing the attack as "the violent beginning of an internal ideological struggle between Islamist elements in the Pakistani armed forces and their secular and liberal top brass."
He also cited (as he often did) unnamed sources in the ISI, Pakistan's military intelligence service, quoting one as saying: "It was shown several months ago that the Pakistan navy is vulnerable to Islamists when a marine commando unit official was arrested.....Now, they (intelligence) realize how the organization (navy) is riddled and vulnerable to the influence of militant organizations."
In a follow-up article on May 27, Shahzad wrote: "Insiders at PNS Mehran (the Karachi naval base) provided maps, pictures of different exit and entry routes taken in daylight and at night, the location of hangers and details of likely reaction from external security forces."

Coming just weeks after the killing of Osama bin Laden a mile from Pakistan's most prestigious military academy, such reporting must have touched plenty of raw nerves within Pakistan's security establishment. It would not have been the first time.

In October 2010, Shahzad was summoned to a meeting at the ISI headquarters in Islamabad.
According to an e-mail of the meeting Shahzad later sent to a friend, the ISI asked him to write a retraction of a story about the release of a Taliban commander. Shahzad refused.

He was then told by an ISI official: "We have recently arrested a terrorist and have recovered a lot of data, dairies and other material during the interrogation. The terrorist had a hit list with him. If I find your name in the list, I will certainly let you know."

In comments about the e-mail made to the Associated Press of Pakistan, an ISI official said it had "no veiled or unveiled threats in it," The ISI "makes it a point to notify institutions and individuals alike of any threat warning received about them," he added.

But it is equally possible that Shahzad had become too knowledgeable about the operations of Islamist extremists for their comfort. He certainly had amazing connections within these groups.
Last year he wrote a fascinating piece about how the Pakistani Taliban had freed an Iranian diplomat they had kidnapped in exchange for anti-aircraft guns that might help them combat U.S. drone attacks.
More recently, he spoke with Maulvi Nazir, a Taliban leader who is one of the most powerful men in Pakistan's restive tribal territory of South Waziristan and who has long been on Pakistan's most wanted list. It was the first time Nazir had ever spoken with a journalist; and Shahzad dared to ask him about his record of opposing al Qaeda:

"Nazir's expression turned serious and he seemed a little tense, but in a fraction of a second he calmed down and replied with firmness. 'This is wrong that I am anti-al Qaeda. I am part of al Qaeda.'"

Shahzad could turn a wry sentence, too. At the end of the same article, he wrote: "I was on the point of asking for elaboration when Nazir said, "Why don't you join us for lunch," indicating in the most polite but unmistakable manner that the interview was over. "

The last time we exchanged e-mails it was about his forthcoming book: "Inside al Qaeda and the Taliban." I was planning to review it for CNN.com; he was pleased it would get some international exposure and proud of what he'd written. "It gives the detailed account on the real mastermind of Mumbai attack and how the same person changed the dynamics of Afghanistan war theatre," he wrote to me.

Shahzad was referring to Ilyas Kashmiri, one of the most feared terrorists in the world. His 313 Brigade is by many accounts closely linked to al Qaeda. In October 2009, Shahzad also became the first and only journalist to interview Kashmiri -- traveling for two days into a remote border area. At one point he was confined to a room and told: "The area is full of Taliban, but also of informers whose information on the presence of strangers in a house could lead to a drone attack."

When he finally was introduced to Kashmiri, his first question was a zinger: "So, you have survived a third drone strike ... why is the CIA sniffing around you so much?"

Fellow journalist Mazheer Abbas knew Shahzad for twenty years, and was always worried about his safety. They first met when Shahzad joined the Karachi-based newspaper The Star. "He started as a junior reporter," Abbas told CNN's Kiran Khalid. "Immediately he started coming out with stories on ethnic conflicts, sectarianism."

"I noticed that he started moving around with people who had close contacts with militants and the intelligence agencies. I told him to be very careful because you could be used by somebody."
"He was courageous but not very careful while reporting," Abbas said -- saying Shahzad had a tendency to talk openly about his contacts. "The level of distrust was very much there among intelligence agencies as well as militant groups. He would move forward and come out with the courageous stories despite the dangers."

And Abbas says Shahzad knew his stuff. "There are not many journalists who have so much command on militant groups the way he did," he said.

Shahzad's kidnapping, in the Pakistani capital's most protected area, has shocked Pakistani journalists. His friend Zafar Sheikh said: "A person has to think a hundred times before saying anything, before writing anything, before making a report. Before performing our journalistic duties, we think a hundred times about who will be angered by it, who will be so incensed that he will want to kill you."

Shahzad never let such thoughts stop him reporting.
He leaves a wife and three children.
CNN's Kiran Khalid contributed to this report
Posted by Steve Douglass at 5:06 AM No comments: