Since 9/11, the military's air defense network over the U.S. has had the ability to monitor commercial airline traffic via Federal Aviation Administration radars. So today's F.A.A. computer glitch that caused widespread flight delays across the country, also affected the military's ability to see some of the information from the F.A.A.

But, but military officials tell ABC News, the interruption did not affect its ability to take emergency action, like scrambling fighter jets to intercept aircraft acting in a suspicious manner, what the military calls "tracks of interest."

"At no given time was our ability to execute our air sovereignty mission affected nor our ability to respond to a track of interest within the United States," says Lt. Col. Susan Romano, a spokesperson for CONR. the Continental U.S. division of NORAD, the North American Aerospace Defense Command.

Romano says that within seconds of the glitch, the F.A.A. notified military authorities that there was an interruption in the military's ability to see some of the flight information on radars.

This is the same 24 hour conference call-like network involved in the incident where the NorthWest passenger jet overshot its intended destination of Minneapolis last month. In that instance, the F.A.A. was criticized for not getting the informing the military in a timely fashion that a plane had overshot its destination.

Within minutes of today's notification Romano says, the CONR operations center and the two air defense sectors that have watch over the entire U. S. had worked out solutions for the four hours that the system was out.

NBC -- A stunning sight lit up the sky over Utah and several western states Wednesday.

Witnesses say it was very bright and lit up the sky for eight to ten seconds.

People reported seeing it in Utah, Idaho, Nevada and California


Posted by Steve Douglass at 4:18 PM No comments:

The CIA built one of its secret European prisons inside an exclusive riding academy outside Vilnius, Lithuania, a current Lithuanian government official and a former U.S. intelligence official told ABC News this week.


Outside Lithuania the CIA used a former barn to interrogate al Qaeda members.
Where affluent Lithuanians once rode show horses and sipped coffee at a café, the CIA installed a concrete structure where it could use harsh tactics to interrogate up to eight suspected al-Qaeda terrorists at a time.

Lithuanian officials provided ABC News with the documents of what they called a CIA front company, Elite, LLC, which purchased the property and built the "black site" in 2004.

ithuania agreed to allow the CIA prison after President George W. Bush visited the country in 2002 and pledged support for Lithuania's efforts to join NATO.

"The new members of NATO were so grateful for the U.S. role in getting them into that organization that they would do anything the U.S. asked for during that period," said former White House counterterrorism czar Richard Clarke, now an ABC News consultant. "They were eager to please and eager to be cooperative on security and on intelligence matters."

ABC News first reported that Lithuania was one of three eastern European countries, along with Poland and Romania, where the CIA secretly interrogated suspected high-value al-Qaeda terrorists, but until now the precise site had not been confirmed. Read that report here.

Until March 2004, the site was a riding academy and café owned by a local family. The facility is in the town of Antaviliai, in the forest 20 kilometers northeast of the city center of Vilnius, near an exclusive suburb where many government officials live.
Posted by Steve Douglass at 4:09 PM No comments:

Posted by Steve Douglass at 3:34 PM No comments:

Cyberwar - Not a game. 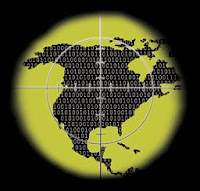 CNET) -- Major countries and nation-states are engaged in a "Cyber Cold War," amassing cyberweapons, conducting espionage, and testing networks in preparation for using the Internet to conduct war, according to a new report to be released on Tuesday by McAfee.

In particular, countries gearing up for cyberoffensives are the U.S., Israel, Russia, China, and France, the says the report, compiled by former White House Homeland Security adviser Paul Kurtz and based on interviews with more than 20 experts in international relations, national security and Internet security.
"We don't believe we've seen cases of cyberwarfare," said Dmitri Alperovitch, vice president of threat research at McAfee. "Nations have been reluctant to use those capabilities because of the likelihood that [a big cyberattack] could do harm to their own country. The world is so interconnected these days."
Threats of cyberwarfare have been hyped for decades. There have been unauthorized penetrations into government systems since the early ARPANET days and it has long been known that the U.S. critical infrastructure is vulnerable.

However, experts are putting dots together and seeing patterns that indicate that there is increasing intelligence gathering and building of sophisticated cyberattack capabilities, according to the report titled "Virtually Here: The Age of Cyber Warfare."
"While we have not yet seen a 'hot' cyberwar between major powers, the efforts of nation-states to build increasingly sophisticated cyberattack capabilities, and in some cases demonstrate a willingness to use them, suggest that a 'Cyber Cold War' may have already begun," the report says.

Because pinpointing the source of cyberattacks is usually difficult if not impossible, the motivations can only be speculated upon, making the whole cyberwar debate an intellectual exercise at this point. But the report offers some theories.

READ THE FULL STORY HERE
Posted by Steve Douglass at 7:08 AM No comments: 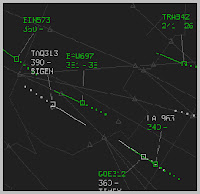 FAA spokeswoman Laura Brown said there are problems processing flight plans and that air traffic controllers are having to enter the plans manually. That means there are going to be "some delays" until the issue is resolved, she said.
The extent of the problem was not immediately clear. The information in the network is required to launch planes expeditiously.

Airplane safety is not affected, the FAA said. Planes in the air have radar coverage and communication, according to the FAA.
The system -- the National Airspace Data Interchange Network, or NADIN -- appears to be the same one that failed in August 2008. The FAA said flight plans are being processed through the network's Salt Lake City, Utah office.
Brown also said there are weather delays in the Northeast.
Posted by Steve Douglass at 7:00 AM No comments: