Air Force Going To War Against Nebraska - but its only an exercise.

The Air Force’s 55th Wing will be conducting training exercise Tuesday and Wednesday.

The base sits south of Omaha, adjacent to the suburb of Bellevue.

Officials say members of the public may hear loud noises from ground-burst simulators and see clouds of smoke from smoke grenades.

Sirens will be heard and the base public address system will be used.

Local authorities have been told about the training.
Posted by Steve Douglass at 6:53 PM No comments: 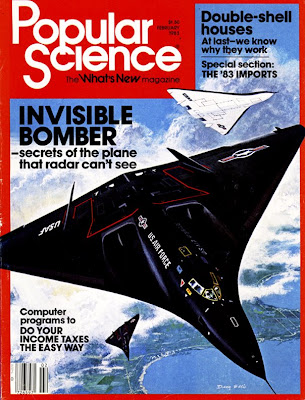 Going through some old back issues of Popular Science, I found this gem. it was a 1982 cover story about the B-2 bomber ( then known only as the Advanced Technology Bomber) and what aviation journalists speculated it looked like.

Although some will say the B-2 doesn't look at all like the artist representation here, Pop Science did get it right in some aspects.

The B-2 did turn out to be a flying wing with engine inlets not that all different than you see here. What they got wrong were the twin canted tails and B-1/X-15 looking nose. However, twin canted tails were considered in early versions of the B-2s design.

Its apparent the artist was also influenced by the markings and paint job on an SR-71.

All in all, the artist's rendering is about eighty percent right.

It is also interesting to note that the same image was ripped-off and published in the Soviet military journal Aviatsiya e Kosmonautika as an exclusive rendering of the real thing.

Click to enlarge.
Posted by Steve Douglass at 9:23 AM No comments:

Until recently these back issues were located in a cardboard box in a barn in Ben Hur Texas, gathering dust and spider eggs, but with many requests by the original Interceptors to see if they could obtain copies, I decided rather than go through the expense of making copies, I'd turn them into Adobe Acrobat PDFs for free download.

I have to admit, as i was looking at the newsletter. I became a bit nostalgic for the early days and comraderie of the the original Interceptors and how much fun we had. We functioned like a mini-intelligence agency, gathering hard data, delving into Pentagon budget reports, looking for suspicious "line items" monitoring the military airwaves from mountaintops and motel rooms, and generally doing everything we could to try and piece together the amazing history of the development of covert military technology.

While reading the newsletters, keep in mind these were written over a decade ago, way before the Internet came into household vogue and became the repository of the information age.

In future (back) issues you'll discover the first writings of the now famous original Interceptors, including Glenn Campbell ( not the singer) who became the thorn in the side of Area 51 security. It's interesting to see his interests in Area 51 change from observer to activist.

A lot of what you will read in these dated Intercepts newsletters concerns projects that never were or will never be declassified.

Some of what we printed turned out to be rumors and intentionally leaked disinformation, while others hinted at projects that are flying today.

I will try and post one newsletter each week on my blog at deepbluehorizon.com. My bandwidth is limited so as new ones go up, old ones will come down so download them while you can.