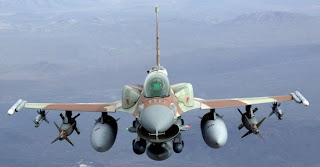 JERUSALEM — The Syrian government said that Israeli warplanes had carried out an airstrike inside its territory on Wednesday, raising the risks that the two-year-old civil conflict in Syria could spread beyond the country’s borders.

A statement by the Syrian military said a scientific research facility in the Damascus suburbs had been hit, but the precise target was unclear. Earlier news reports, confirmed by an American official in Washington, said the Israelis were targeting a truck convoy inside Syria that was bound for Lebanon.

It was the first time in more than five years that Israel’s air force had attacked a target in Syria, which has remained in a technical state of war with Israel although both sides have maintained an uneasy peace along their disputed border.

The Syrian statement denied the reports that Israeli warplanes had struck a truck convoy carrying antiaircraft weapons destined for Hezbollah, the Lebanese Shiite militant group, which is allied with President Bashar al-Assad of Syria and considers Israel its main enemy.

“Israeli warplanes violated our airspace at dawn, bombing directly one of the research scientific centers in the Jimraya district in rural Damascus,” the Syrian statement said, calling it a “breach of Syrian sovereignty.”

But the Israelis have warned in recent days about what they called the threat of chemical or advanced conventional weapons leaking from Syria to Hezbollah in Lebanon or into the hands of extremist Islamic rebel groups as a result of the turmoil in Syria.

The Lebanese Army said in a statement on Wednesday that Israeli warplanes had carried out two sorties, circling over Lebanon for hours on Tuesday and before dawn on Wednesday, but made no mention of any attacks.

Jerusalem has long maintained a policy of silence on pre-emptive military strikes. It would not comment after Sudan accused the Israel military of carrying out an air attack that destroyed a weapons factory in Khartoum, the Sudanese capital, in October. Israel also never admitted to the bombing of a Syrian nuclear reactor in 2007, and Syria kept mum about that attack. The ambiguity allowed that event to pass without Syria feeling pressure to retaliate.

The heightened sense of alert in Israel this week had focused on the Syrian government’s precarious hold on its stockpiles of chemical weapons. But Israeli officials and experts have also voiced concern about the fate of what they describe as conventional “strategic weapons” in Syria, including advanced ground-to-air missiles, shore-to-sea missiles and anti-tank missiles. They say such weapons in the hands of Hezbollah, which Israel last fought in a monthlong war in 2006, could upset the current balance of forces in the region.

Amnon Sofrin, a retired brigadier general and former Israeli intelligence officer, told reporters in Jerusalem on Wednesday that Hezbollah, which is known to have been storing some of its more advanced weapons in Syria, was now eager to remove everything it could to Lebanon. He said Israel was carefully watching for convoys transferring weapons systems from Syria to Lebanon.

Speaking at an international space conference in Israel, General Eshel said: “We work every day in order to lessen the immediate threats, to create better conditions so that we will be victorious in future wars. This is a struggle in which the Air Force is a central player, from here to thousands of kilometers away.”

There have been reports in the last week of feverish security consultations between Israel’s political and security chiefs, and at least one Iron Dome anti-rocket missile defense battery was deployed in northern Israel. Israel’s national security adviser, Yaakov Amidror, was in Moscow for talks with Russian officials on Monday.

Israel has made it clear that if the Syrian government loses control over its chemical weapons or transfers them to Hezbollah, Israel will most likely be compelled to act. Avi Dichter, the minister for the home front, told Israel Radio on Tuesday that options to prevent Syria from using or transferring the weapons included deterrence and “attempts to hit the stockpiles.”


Isabel Kershner reported from Jerusalem, and Rick Gladstone from New York. Reporting was contributed by Anne Barnard and Hwaida Saad in Beirut, Lebanon, and Michael R. Gordon and Eric Schmitt in Washington.
Posted by Steve Douglass at 1:12 PM No comments:

Posted by Steve Douglass at 12:11 PM No comments: