Mobile laser breakthrough to be tested at White Sands

By Kevin Robinson-Avila / Journal Staff Writer | 14 hours ago
Copyright © 2013 Albuquerque Journal
Boeing Co.’s Directed Energy Systems division in Albuquerque has developed a solid-state laser system that eventually could be used by the U.S. military to destroy IEDs, shoot down rockets and take out drones.
“Our team has shown that we have the necessary power, the beam quality and the efficiency to deliver such a system to the battlefield,” said Michael Rinn, the Directed Energy Systems division’s vice president and program director.
The company said a recent demonstration here of its “thin disk laser system” – which integrates a series of high-power industrial lasers to generate one concentrated, high-energy beam – exceeded the Defense Department’s technical requirements for potential use in weapons systems.
The new system was developed in part through a $6 million contract under the DOD’s Robust Electric Laser Initiative. That program aims to design new solid-state lasers to replace chemical-based ones, which can be more complicated to deploy.
“Chemical lasers involve hard-to-handle chemicals and require cumbersome procedures for soldiers, whereas the ones under development are closed-loop, all-electronic systems, making them more mobile and supportable on the battlefield,” Rinn said.
Boeing will now seek DOD funding to package the laser system into a design that can be mounted on weapons such as a conventional deck gun on a Navy warship.
“This is still lab technology for now, so we hope to get government funding to take it forward,” Rinn said. “It remains to be seen if the Army picks this over other solid-state lasers being developed.”
Rinn said the new system meets the test of achieving high brightness while simultaneously remaining efficient at higher power.
The technology basically combines individual, commercial lasers used by industry to create a much more powerful beam that can be applied for weapon use, Rinn said.
Boeing worked to retain the reliability and efficiency demonstrated in the original laser heads, which run continuously in industrial applications, while increasing the power and improving the beam. The company needed to reach 30 percent electricity-to-laser efficiency.
“We produced a 30 kilowatt laser with 90 kilowatts of electricity,” Rinn said. “Those are the military-utility-class numbers needed, and we achieved it.”

READ THE REST OF THE STORY AT THE ALBUQUERQUE JOURNAL

Posted by Steve Douglass at 2:08 PM No comments: 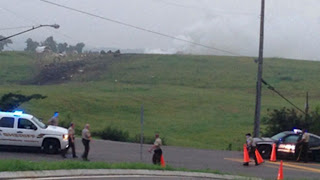 A UPS jumbo cargo plane with at least two people aboard crashed early Wednesday just outside the fence of the Birmingham, Ala., airport, and FAA official confirmed.

A UPS that the plane was a UPS A-300 Airbus, tail number N155UP, with two crew members aboard. The flight originated in Louisville, Ky., and crashed upon its approach in Birmingham. UPS said the crew has not been located.

"Our thoughts and prayers are with the crew," the spokesman said.

Federal Aviation Administration spokeswoman Kathleen Bergen told The Associated Press that the plane crashed before dawn Wednesday. Debris was still smoldering and the nose of the plane was detached from the body.

Toni Bast, a spokeswoman for Birmingham's airport authority, said the cargo plane crashed near Birmingham-Shuttlesworth International Airport. Bast said the crash site is outside the airport's perimeter fence and has not affected airport operations.

Few other details were immediately available. The plane appears to have crashed in an isolated field and a plume of smoke was seen rising from the site. Teams of emergency crews responded to the crash.

Bergen says she had no information on injuries.

The National Transportation Safety Board said it was deploying a Go-Team from Washington, D.C., to investigate the crash.

The scene is about a half-mile north of Runway 18. At 7 a.m. Wednesday, conditions in the area were rainy with low clouds.

Previously, a UPS cargo plane crashed on Sept. 3, 2010, in the United Arab Emirates, just outside Dubai. Both pilots were killed. Authorities there blamed the crash on its load of between 80,000 to 90,000 lithium batteries, which are sensitive to temperature. Investigators found that a fire on board likely began in the cargo containing the batteries.

The Associated Press contributed to this report
Read more: http://www.foxnews.com/us/2013/08/14/ups-cargo-plane-crashes-near-alabama-airport/#ixzz2bwtBxbmb
Posted by Steve Douglass at 6:15 AM No comments: