Real stealth helicopter or a movie prop? UPDATED: It's a fake, 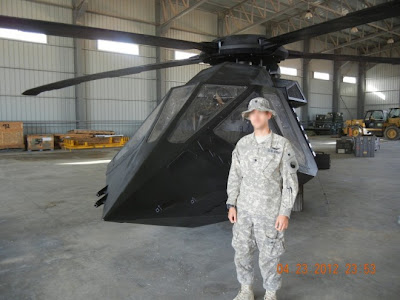 WIRED DANGER ROOM:
It’s either one of the biggest aviation news scoops in the last decade, or the latest in Hollywood fakery. Today ace aviation reporter David Cenciotti circulated the above photo, apparently depicting a stealth helicopter similar to those used by the U.S. Joint Special Operations Command in the May 2011 raid that killed Osama Bin Laden in his Abbottabad, Pakistan, compound. The photo originally appeared with little notation on Photobucket.
Thing is, a movie about the Abbottabad raid entitled Zero Dark Thirty features prop stealth helicopters that, coincidentally, appear to be loosely based on Cenciotti’s own reporting from last summer. Check out the 38-second mark in the official trailer for a glimpse of the controversial film’s version of the “Silent Hawk” helicopter, as the press has dubbed it. Looks a lot like the thing in the photo, if you ask us.
Cenciotti agrees. “It looks like it may really be the mock up for the new Osama Bin Laden movie,” he tells Danger Room.
Zero Dark Thirty, directed by Kathryn Bigelow — she of Hurt Locker fame — is slated for a December release. To support the production, the White House, Pentagon and CIA all offered Bigelow and her screenwriter Mark Boal unprecedented access to government sources and facilities.
But Special Operations Command chief Adm. William McRaven insists his command was not involved. “I have no interaction and no one on my staff has any interaction with — what’s her name? Bigelow?” McRaven told Danger Room in May.
READ THE FULL STORY HERE
Enhanced/inverted freeze frame from Zero-Dark-Thirty trailer showing stealth helicopter: 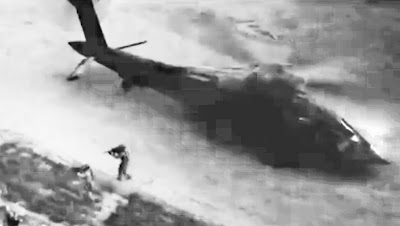 Blogger's note: After examining the image closely and the one in the trailer it is clear that this is most likely a movie prop. There seems to be no radar absorbent gold tint on the cockpit windows and the tips of the pitot tubes should be angular - cut like a diamond - plus the tail that was recovered at the bin Laden compound bore silver anti-infrared paint like F-22s wear. -Steve Douglass 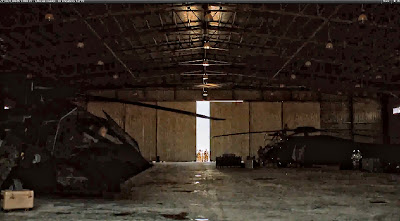 UPDATE: Later today this video still - reportedly from a yet to be released trailer for Zero Dark Thirty popped up, laying to rest the rumor that someone had managed to take a snap of the still secret bin Laden raid stealth helicopter.

Although the quality is bad, it is clearly the same helicopter (prop) and hangar seen in the large photo above.

There also seems to be another "stealth helicopter" in the (dark) right corner of this video frame. The hangar doors also match the ones in the trailer.  Case closed - it's a prop but a pretty savvy way of generating some internet buzz!