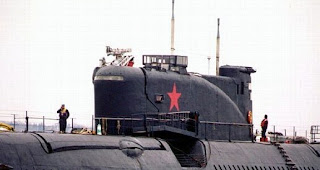 Reuters) - Fifteen seamen were in hospital on Tuesday after a fire on a Russian nuclear submarine, federal investigators said, contradicting earlier reports that nobody was hurt in Monday's blaze.


The fire started during welding works on the navy submarine Tomsk, which was being repaired at the giant Zvezda shipyard near the far eastern city of Vladivostok on the Sea of Japan, military officials said.


The fire was extinguished after about five hours, the state-owned United Shipbuilding Corporation, which operates the shipyard, said in a statement on Monday. It said there were no injuries.


In a report to President Vladimir Putin later on Monday, Defence Minister Sergei Shoigu made no mention of injuries.


However, the federal Investigative Committee said on Tuesday the fire had "caused damage to the health of 15 servicemen" and they remained in hospital. It gave no details about their condition.


The Investigative Committee, which answers to Putin, said in a statement it was conducting a criminal investigation into the fire - which is a normal step in Russia after such an incident.


Shoigu told Putin that the missiles the submarines normally carries had been removed in 2009 before the repairs began, and officials said the atomic reactors that power it had been shut off and that there was no radiation leak.


Russia's navy has suffered several fatal accidents since the collapse of the Soviet Union in 1991.


The nuclear-powered submarine Kursk sank in the Barents Sea in 2000, killing all 118 crewmen aboard, and 20 people died aboard the submarine Nerpa in 2008 when its fire extinguishing system went off, flooding compartments with deadly gas.


(Writing by Steve Gutterman, editing by Elizabeth Piper)
Posted by Steve Douglass at 5:47 AM No comments: