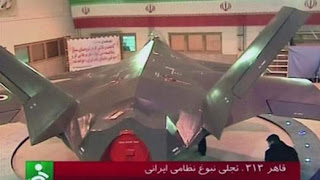 Iran yesterday revealed its most recent indigenous fighter jet — the “Qaher 313″. The prototype Q-313 was presented to President Mahmoud Ahmadinejad, as a ceremonial gift during the country's Ten-Day Dawn celebration. The festivities commemorate the 1979 revolution when the U.S. embassy in Tehran taken by force.

In the previous days, the Iranian Defense Minister Brigadier General Ahmad Vahidi had said, “The aircraft will be different from the other fighter jets Iran has already made.”

Indeed, based on the first photographs released by the FARS News Agency, the new stealthy jet has a peculiar design. It features hard edges and those distinctive edges and angle of the U.S. F-22 and the twin tail shape much similar to that of the F-35 Lightning II. 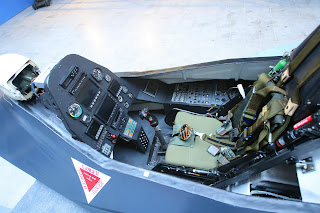 The Q-313 has large, seemingly fixed canards, and little wings whose external section is canted downward, while the canopy material is at least odd (based on its transparency, it looks like Plexiglas or something like that).

The cockpit seems basic (a bit too much for a modern plane – note the lack of wiring behind the front panel).

The Defence Minister, Ahmad Vahidi, said: "Qaher is a fully indigenous aircraft designed and built by our aerospace experts.

"This is a radar-evading plane that can fly at low altitude, carry weapons, engage enemy aircrafts and land at short airstrips." 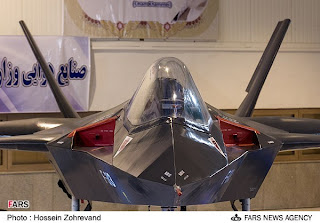 He said it was Iran's best stealth plane.

However, some reports suggest Iran's program relies on equipment supplied by major international defence contractors and that it incorporates parts made abroad or uses outside engineered technologies in its domestic designs.

Pictures of the Qaher released by the official IRNA news agency and pictures on state TV showed a single-seat jet. They described it as a fighter-bomber that can combat other aircraft and ground targets.

Posted by Steve Douglass at 4:39 PM No comments: