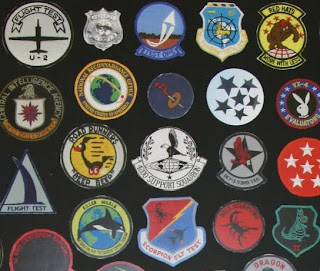 Some very interesting photos by Photos by Alan Johnson at this LINK.

Of particular interest is the display of secret program patches.

Read the DREAMLANDRESORT discussion thread HERE. in the DISCUSSIONS FORUM.

A Los Angeles/Lake Elsinore man who lost his hand in an improvised explosion device (IED) is being held in custody today after he went to a hospital emergency room with his hand blown off. His brother and mother have been arrested on suspicion of making explosives and child endangerment, a Riverside county sheriff's sergeant said.

The allegations stem from explosives found at the family's home, where the mother ran a licensed daycare facility, said sheriff's Sgt. Dennis Gutierrez.

Benjamin Kuzelka, 23, walked into a hospital and told emergency personnel that he had shot his own hand, said sheriff's Sgt. Gutierrez.

An examination of the wound determined it was not consistent with a gunshot, and Kuzelka later told deputies that he had been injured by explosives, Gutierrez said.

Sheriff's deputies, along with agents from the FBI and Bureau of Alcohol, Tobacco, Firearms and Explosives, went to his home at 30524 Audelo Street and found bomb-making materials and marijuana plants, the sergeant said.

Kuzelka was in serious condition and will be arrested when he recuperates.

His brother, Grey Timothy Kuzelka, 21, was arrested and booked into the county jail. He had been free on bail since Sunday, following an arrest on suspicion of drug possession, sales and transport.

Their mother, Rebecca Kuzelka, 55, was also being held.

The possibility that the family is associated with hate groups or other radical home grown or international terrorist with intentions of bombing southern California targets is being investigated by local, county and federal authorities according to an investigator.

Law enforcement in surrounding counties including Orange and L.A.Counties are investigating to see if there is any connection between the Kuzelka family and any recent bomb threats.
Posted by Steve Douglass at 3:33 PM No comments: