The U.S. Air Force brought all 2,000 Georgian troops home from Iraq aboard C-17 Globemasters Sunday and Monday after the Georgian government recalled the troops to combat the advance of Russian troops into the country, said Lt. Gen. Gary North, commander of U.S. Air Forces Central.

Sixteen C-17 flights had shuttled Georgian troops and supplies from Iraq back to Georgia as of 9 a.m. EST on Monday, North said. The Georgian government on Friday requested the U.S. Air Force’s aid in bringing its troops home, he said.

“This is just another example of the flexibility of airpower,” he told Air Force Times. “I’m real proud of the ability of our airmen to orchestrate a movement such as this.” 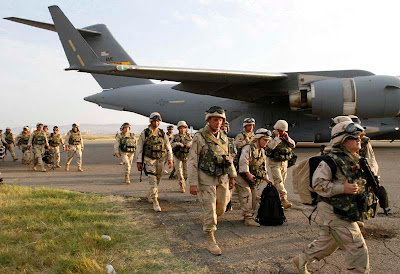 TBILISI, Georgia (CNN) -- Both Georgia and Russia claim that ethnic Georgians and ethnic Russians are wrongly being detained in the conflict over South Ossetia.

Russian troops and their allies were making "mass arrests" of Georgian civilians in the breakaway Georgian region of South Ossetia and were taking them to a local village, the Georgian government said in a statement.

"According to the reliable information held by the Ministry of Foreign Affairs of Georgia, Russian servicemen and separatists carry out mass arrests of peaceful civilians of Georgian origin still remaining on the territory of the Tskhinvali region and subsequently concentrate them on the territory of the village of Kurta," the government said on Monday.
Posted by Steve Douglass at 6:53 AM No comments: 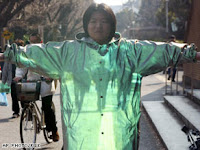 WASHINGTON (AP) -- Scientists say they are a step closer to developing materials that could render people and objects invisible.


In this 2003 photo, Tokyo University students use space-age material to make this student appear invisible.

Researchers have demonstrated for the first time they were able to cloak three-dimensional objects using artificially engineered materials that redirect light around the objects.

Previously, they only have been able to cloak very thin two-dimensional objects.

The findings, by scientists at the University of California, Berkeley, are to be released later this week in the journals Nature and Science.

The new work moves scientists a step closer to hiding people and objects from visible light, which could have broad applications, including military ones.

People can see objects because they scatter the light that strikes them, reflecting some of it back to the eye.

Metamaterials are mixtures of metal and circuit board materials such as ceramic, Teflon or fibre composite.

Bog author's note: This reporter wrote an article on how the military was experimenting with this technology almost a decade ago. See related link to my original (with Bill Sweetman) that appeared in Popular Science magazine under the Topical Links menu to your upper right.
Posted by Steve Douglass at 6:38 AM No comments: