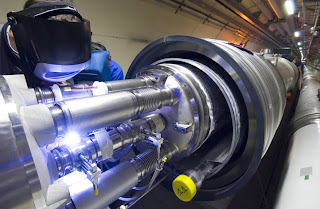 Posted on: Saturday, 10 October 2009, 10:21 CDT
France has captured a worker at the European Organization for Nuclear Research (CERN) for alleged connections with al-Qaeda, officials announced.
The 32-year-old man was one of two brothers apprehended in the town of Vienne on Thursday. Police think that the suspect communicated on the Internet with the al-Qaeda, and had been contemplating attacks on France.
The organization established that a physicist working at CERN was detained "under suspicion of links to terrorist organizations", and is aiding the French police.
"He was not a CERN employee and performed his research under a contract with an outside institute. His work did not bring him into contact with anything that could be used for terrorism," they said to BBC News.
The suspect was a part of LHC Beauty research, which is exploring the distinctions between matter and anti-matter.
CERN, a civilian group endorsed by 20 member states, is Europe's primary laboratory for the examination of the basics of sub-atomic physics.
Security service officers, using a warrant from an anti-terrorist officer, held the two brothers for questions on Thursday in Vienne.
The physicist spoken via the Internet with people connected to al-Qaeda and told them he was interested in performing the attacks, but had "not got to the stage of carrying out material acts of preparation.”
Two computers, three hard drives and other machines were taken from his residence after the arrest.
"The inquiry will doubtless establish what the targets were in France or elsewhere, and perhaps indicate that we have avoided the worst," French Interior Minister Brice Hortefeux said at a press conference.
"We are in a situation of permanent alert. We follow statements made by the leaders of certain organizations day by day. We never let our guard down. The danger is permanent," he added.
Posted by Steve Douglass at 9:12 AM No comments: