The Defense Acquisition Program Administration (DAPA) will release a request for proposals next month to local and foreign manufacturers, and intends to pick final bidders by year's end.

U.S. company Gulfstream Aerospace and Canada's Bombardier will compete to make the airframes.

"The project is designed to further improve the nation's ISR [intelligence, surveillance and reconnaissance] capability against North Korea," one source said. "The new airplanes will have more advanced signal and communications intelligence equipment than those for existing Baekdu reconnaissance aircraft."

Seoul is beefing up various military capabilities as it prepares to assume wartime operational control from the United States in 2012. It has moved more quickly since March, when a South Korean Navy corvette, the Cheonan, was sunk off the disputed sea border with the North, allegedly by a North Korean midget submarine.

The plans for a new aircraft emerged during a June 8-10 demonstration by eight South Korean companies and the state-funded Agency for Defense Development (ADD) of ISR-related systems and concept models, on the sidelines of the Asia-Pacific Intelligence Chiefs Conference here. Among the exhibits:

n ADD displayed a model of the Tactical EO/IR Reconnaissance System, which will be loaded onto KF-16 fighter jets, turning them into RF-16s that will replace RF-4/5 aircraft in coming years.

The ground station and mission control system would allow various functions for imagery interpretation, a three-dimensional display and exploitation, and interface with the Air Force's C4I system.

n LIG Nex1 promoted its Harbor Underwater Surveillance System (HUSS). Developed with ADD, the HUSS includes an underwater moored passive line array to target ships, submarines and semi-submerged vehicles outside the harbor; magnetic/acoustic sensors to spot ships, semi-submersibles and swim-mer delivery vehicles in the approaches, and active sonar to find swimmer delivery vehicles and combat swimmers in the harbor itself.

The South Korean Navy plans to deploy five HUSSes at ports on the Yellow Sea, on the western coast.

The SUGV carries a K-7 9mm submachine gun and travels at up to 9 kilometers per hour.

n Hanwha also displayed the CROW micro UAV. Meant for company- and platoon-level infantry units, the 500-gram aircraft has a wingspan of just 70 centimeters and a length of 50 centimeters. It has a an operational altitude of 100 to 500 meters and a top speed of 90 kilometers per hour.

The aircraft is launched by hand and lands by parachute.
Posted by Steve Douglass at 7:53 AM No comments: 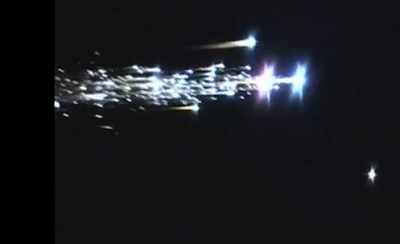 Japanese space probe recovered in Australia
By TANALEE SMITH (AP) – 2 hours ago
ADELAIDE, Australia — A team of scientists flew to the Australian Outback on Monday and recovered a Japanese space capsule that they hope contains asteroid samples providing clues into the evolution of the solar system.

The Hayabusa explorer returned to Earth overnight after a seven-year, 4-billion mile (6-billion kilometer) journey, burning apart on re-entry in a spectacular fireball just after jettisoning the capsule. It was the first time a spacecraft successfully landed on an asteroid and returned to Earth.
Seiichi Sakamoto of the Japan Aerospace Exploration Agency, which launched the explorer in 2003, said they were "delighted" to recover the capsule, particularly after a number of technical problems delayed Hayabusa's arrival for three years.
"It was an extremely difficult technological challenge, and we did everything to overcome the troubles one by one," he said. "This is an achievement we could make simply because we never gave up hope."

The capsule was airlifted late Monday afternoon to the town of Woomera, where it would be prepared over several days for air freighting to Japan, NASA scientist Scott Sandford said by telephone from the scientists' base in Woomera.
Sandford said he had not seen the capsule but that photographs indicated it had made a soft desert landing.

The capsule will return to Japan before scientists discover whether it carries any asteroid dust in its sample canister.
"It'll be some time before we know if we've got sample, and if so, how much — I don't think we can assume anything," Sandford said.
Sandford said it was a relief to watch the re-entry and see the capsule successfully detach and parachute to Earth.

"During a mission critical event like a re-entry, there's a whole series of things you've got to get right to make it work, and they all seemed to have come off without a hitch," said Sandford. "It's a great testament to the design and operation of the spacecraft."
Hayabusa reached an asteroid called Itokawa in 2005. After taking photo images from all angles of the 1,640-foot (500-meter) -long asteroid, Hayabusa landed on it twice in late 2005.

The craft was designed to shoot a bullet into the surface of the asteroid that would crush and propel material through a long tube into a sample collection container. There is no certainty the bullet actually fired, scientists say, but they believe the impact of the tube's landing would have forced some material upward and into the collection chamber.
"We have perhaps a 50 percent chance" of retrieving samples, Sakamoto said.

The Japanese space agency said the aim of the $200 million project was to understand the origin and evolution of the solar system, as well as paving the way for future sample return missions.
Sakamoto said any samples from an asteroid, considered the building blocks of planets, could also shed light on the origins of the Earth.

Scientists hope to study how and when the asteroid was formed, its physical properties, what other bodies it may have been in contact with, and how solar wind and radiation have affected it.
Hayabusa was originally due to return to Earth in 2007 but a series of technical glitches — including a deterioration of its ion engines, broken control wheels, and the malfunctioning of electricity-storing batteries — forced it to miss its window to maneuver into the Earth's orbit until this year.

If Hayabusa is indeed carrying asteroid samples, it would be only the fourth space sample return in history — including moon matter collected by the Apollo missions, comet material by Stardust, and solar matter from the Genesis mission.

Preliminary analysis of the samples will be carried out by the team of Japanese, American and Australian scientists in Japan. After one year, scientists around the world can apply for access to the asteroid material for research.


Click on the video to view it on You Tube
Posted by Steve Douglass at 6:05 AM No comments: