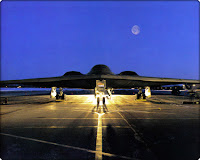 WASHINGTON (AFP) – The world's most expensive warplane rarely leaves its climate-controlled hangar but when it does, the B2 bomber makes a spectacularly effective start to a war -- including during this weekend's attack on Libya's air defenses.

The mission of the B2 Spirit stealth bomber is to penetrate heavily defended enemy territory and "kick down the door" on the opening night of a conflict, and the stealth aircraft has been put to that use during the Iraq War, Kosovo and Afghanistan.

Costing 2.1 billion dollars each, the B2 has a contoured, radar absorbing skin that makes it almost impossible to detect.

The long-range, heavy bomber capable of penetrating sophisticated and dense air-defense, and with one refueling, is able to fly to any point in the world within hours.
The aircraft is famous for rather ominous-looking bat-like silhouette: The leading edges of the wings are angled at 33° and the trailing edge has a double-W shape. It is manufactured at two Northrop Grumman facilities in Pico Rivera and Palmdale in California.

The aircraft also are deadly and effective: An assessment published by the USAF showed that two B2s armed with precision weaponry can do the job of 75 conventional aircraft

That makes it a powerful weapon to strike targets including bunkers, command centers, radars, airfields, air defenses.
The B2 can carry 16 2,000 pound (900 kilogram), satellite-guided bombs, including an earth penetrating version.
It also is the only US warplane equipped to deliver the GBU-37 "bunker buster," a 5,000 pound (2,250 kilo) bomb with a hardened nose that can bore through 20 to 30 feet of rock or reinforced concrete before detonating.
Its bomb bays can carry eight GBU-37s, and it also can carry 16 Joint Air to Surface Standoff Missile (JASSM), which have been tested at ranges 180 miles (290 kilometers) from the target, or the Joint Standoff Weapon (JSOW), a glide bomb that releases cluster bombs.

A major drawback, however, is the intensive maintenance required by the B2s, whose heat and moisture sensitive skin must be painstakingly taped and cured after every mission.
In previous conflicts, the maintenance requirements kept the B2s tethered to their home base at Whiteman Air Force Base in Missouri.

In Afghanistan, that meant 44-hour bombing runs for their two-member crews, the longest air combat missions in history. It also meant few B2 missions.

But the air force has built special climate controlled shelters at bases on the Indian Ocean island of Diego Garcia and at Fairford, England for B2s, which were built by Northrop Grumman and first flew in 1989.

However, US defense officials said Sunday that three B-2 Stealth bombers flew non-stop from Whiteman Air Force Base, Mo., dropping 40 bombs on a major Libyan airfield in an attempt to destroy much of Ghadafi's air force.
Posted by Steve Douglass at 12:47 PM No comments:

Growls and Harriers growl over Libya ...

"Protecting the innocent and conducting combined operations are what we are designed to do," said Colonel Mark J. Desens, commanding officer of 26th MEU. "Our forces are doing both as part of the U.S. commitment to protect Libyan citizens." 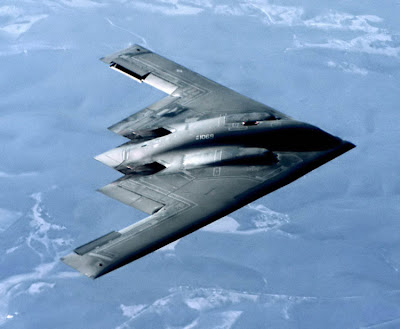 WASHINGTON — Three US B-2 stealth bombers have dropped 40 bombs on a major Libyan airfield.
There was no immediate official confirmation of the attack.

On Saturday, the United States unleashed a barrage of Tomahawk missiles against the Libyan regime's air defenses, but ruled out using ground troops in what President Barack Obama called a "limited military action".

Tomahawk cruise missiles are unmanned and fly close to the ground, steering around natural and man-made obstacles to hit a target programmed into them before launch.

A senior U.S. military official, who was not authorized to speak on the record, said the cruise missiles landed near the city of Misrata and the capital, Tripoli.

Scores of missiles were fired in the pre-dawn darkness, and the exact results of the mission were not immediately clear. The United States is expected to conduct a damage assessment of the sites.
The salvo, in an operation dubbed "Odyssey Dawn," was meant "to deny the Libyan regime from using force against its own people," Gortney said.

British Defense Secretary Liam Fox said the Royal Air Force deployed Tornado GR4 fast jets, which flew 3,000 miles from the United Kingdom and back -- making the venture the longest-range bombing mission conducted by the force since the Falklands conflict in 1982.

British Prime Minister David Cameron said the international mission "is necessary, it is legal, and it is right."

"I believe we should not stand aside while this dictator murders his own people," Cameron said late Saturday night.

But Gadhafi remained defiant, saying Libya will fight back against undeserved "naked aggression."
Posted by Steve Douglass at 2:54 AM No comments: