The Air Force’s senior leaders will convene Wednesday to discuss and make decisions about urgent Air Force issues that will shape the future of the service.

In attendance will be the Air Force’s four-star generals, commanders of the major commands and the heads of the Air Staff directorates, the official said.

The issues to be discussed include:

* End strength. With the drawdown ended, how can the service achieve the right mix of personnel for a force of 330,000?

* Uniforms. Will Schwartz push for a lighter ABU? Will he ditch the new service dress or the green suede boots?

* Maintenance reorganization. Should maintainers be in flying units or maintenance units?

* Battlefield training. How can the Air Force best train airmen going outside the wire in war zones?

* Cyber Command. The much-touted command has been put on hold while the new leaders figure out the best way to move forward.

* War-zone intelligence, surveillance and reconnaissance. The Air Force needs to get more ISR assets into the war zone, and fast.

Decisions on some of these issues could be made immediately, the official said, but most will be announced in the coming months.

“Our intention is to announce any decisions as soon as possible after the [meeting],” the official said. “There are some topics on the agenda which should result in final decisions. But in most cases, issues will be discussed and the way ahead planned so that at a future date, such as the upcoming Corona [leadership summit], decisions can be made.”

The meeting comes after the Air Staff has spent the past few weeks working on “taskers” Schwartz and Donley assigned to inform their decisions on these and other issues.

Most major decisions have been put on hold since Donley and Schwartz took over in late June and early August, respectively.
Posted by Steve Douglass at 6:25 PM No comments:

CNN) -- A Sudanese plane that was hijacked shortly after taking off from Nyala in the country's Darfur region, presumably by rebels, has landed in Kufra, Libya, Sudan's ambassador to the United States said.

"I believe since it started in the sovereign state of Darfur ... it is more likely something to do with the rebels in that area," John Ukec said.

The hijacker or hijackers at first wanted to land the plane in Egypt, but the Egyptian government refused them permission, Ukec said.

About 87 passengers and 10 crew members are thought to be on board, Ukec said. It was unclear how many hijackers were on board.

A reporter from Al-Shuruq, a Dubai-based Sudanese network funded by Sudan's government, said passengers on the plane include some officials from the interim government of Darfur, Sudan's war-torn region.

"We are in contact with Libyan officials because of this dangerous event," Murtada Hassam Jumaa, an official with Sun Air airlines, told Al-Shuruq. "We want to resolve this situation as soon as we can in a way where we can guarantee the safety of all our passengers."

Asked whether the airline received any threat before the flight took off, he said, "There were no signs of any terrorist or criminal activity on the plane. We checked the plane like we do with all other planes. We followed the regular security checkup. We still don't have any information on what type of weapons were used."

Jumaa also said 87 passengers were on board the plane.
Posted by Steve Douglass at 12:37 PM No comments: 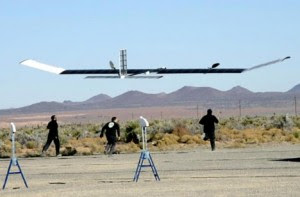 DailyTech reports that defense firm QinetQ has set the unofficial world record for the longest continuous unmanned flight with the Zephyr, a British-built spy plane.

The Zephyr stayed in the air for 82 hours and 37 minutes, besting the previous record of 30 hours and 24 minutes held by Northrup Grumman’s Global Hawk.

The plane, which can be launched by hand, has a carbon fiber skeleton that weighs under 70 lbs and an 18m wingspan covered with silicon solar cells. It is powered by a lithium sulfur rechargeable battery that is twice as efficient as any other battery in the world.

Despite the Zephyr’s record-smashing speed, it will not set any official world records. According to the World Air Sports Federation, the plane’s flight did not fulfill the requirements of a world record attempt since it was performed to test the Zephyr’s ability to relay ground radio messages.

But that doesn’t mean the test flight was for naught. The Zephyr’s designers believe that the plane could potentially fly continuously for weeks or months, and the technology has countless military uses. Even more exciting, the Zephyr’s exhibition of solar energy used in flight opens up the possibility of manned solar-powered planes—a development that would revolutionize the aircraft industry.
Posted by Steve Douglass at 6:00 AM No comments: