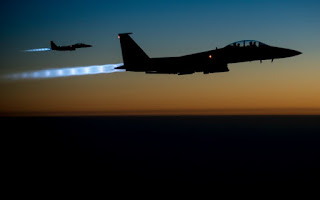 A day after reportedly killing "Jihadi John" in Syria, the Pentagon announced it killed the top ISIS operative in Libya, Wisam al Zubaidi.

The announcement confirms The Daily Beast's original report that the U.S. targeted a senior member of the group on Friday, according to two senior U.S. administration officials.

The strike, which was carried out by F-15 aircraft, marks the first time the U.S. has directly gone after ISIS outside of Iraq or Syria.


The strike hit Wisam al Zubaidi, a.k.a. Abu Nabil al Anbarian, an Iraqi national who once led al Qaeda operations in part of Iraq.At some point after that, he moved to eastern Libya to lead ISIS operations there.


The strike in Libya is completely unrelated to the series of terror attacks that took place across Paris Friday night, leaving at least 127 people dead, said the senior official, who was not authorized to speak publicly and therefore requested anonymity.

French President Francois Hollande said Saturday that ISIS carried out the wave of terror attacks in Paris. The group itself claimed responsibility Saturday, calling the attacks “miracles” in a written statement.

READ MORE ON THE DAILY BEAST
Posted by Steve Douglass at 12:22 PM No comments: