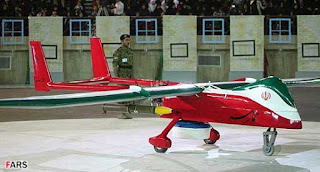 Iran flew a surveillance drone over a US aircraft carrier and took “precise” photographs of it as part of an ongoing naval drill, state media has reported. The US navy said an unarmed Iranian drone flew near a French and American carrier earlier this month, but couldn’t confirm it was the same incident.

The reported overflight by the unmanned aircraft came after a series of naval incidents between Iran and the US in the greater Persian Gulf, including test rocket fire by the Islamic Republic and its brief capture of American sailors who strayed into its territorial waters.

The US navy said it did not open fire as the drone was unarmed and not threatening the ship’s safety, but the incident again highlighted that tensions remain between America and Iran in Gulf waters despite their recent diplomatic detente.

The Associated Press could not independently verify the footage, published on Friday by Iranian state television and the semi-official Fars news agency, which has close ties to the Revolutionary Guard.

Commander Kevin Stephens, a spokesman for the US navy’s 5th fleet based in Bahrain, said an unarmed Iranian drone flew near the French aircraft carrier Charles de Gaulle and “directly over” the USS Harry S Truman on 12 January as the vessels were in international waters in the Persian Gulf.

He said the navy launched a helicopter that determined the drone was not armed and “posed no danger to the ship” as the carrier was not conducting flight operations at the time. His comments implied that had there been active takeoffs and landings of US aircraft, the situation might have changed.

Stephens called the drone’s flight “abnormal and unprofessional”. He added that the US navy was “not in a position to verify the authenticity of the video as there are countless examples of similar footage to be found on the internet”.

The report by state television said the drone flight occurred on the third day of the naval exercise, suggesting it happened on Friday.
Posted by Steve Douglass at 2:06 PM No comments: