The chairman of Russian energy firm Lukoil has died after "falling" from a hospital window in Moscow, state media has reported.

Ravil Maganov, 67, was pronounced dead after plunging from ward on the sixth floor of the Central Clinical Hospital where he was receiving treatment, according to Russian state news agency Interfax. 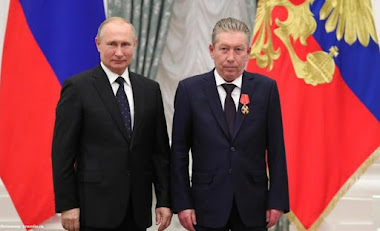 Lukoil confirmed Maganov's death in a press release on Thursday, but said only that it came "after a serious illness."

But Maganov is now the latest in a series of Russian business executives who have died in unusual circumstances this year, amid speculation that murders of top businessmen are being staged to look like suicides.
In March, Lukoil's board of directors issued a statement expressing "its deepest concerns about the tragic events in Ukraine."

It said: "Calling for the soonest termination of the armed conflict, we express our sincere empathy for all victims, who are affected by this tragedy. We strongly support a lasting ceasefire and a settlement of problems through serious negotiations and diplomacy."

Billionaire Alexander Subbotin, the former top manager at Lukoil, was one of the oligarchs who died in strange circumstances this year.

Posted by Steve Douglass at 8:56 AM No comments: