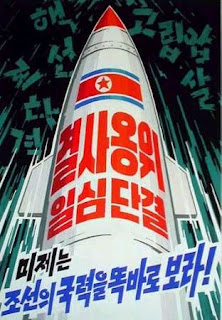 
SEOUL, South Korea — The South Korean government warned on Sunday that the North might launch a missile later this week, while a top military leader postponed a scheduled trip to Washington, citing escalating tensions on the peninsula.

The warning by Kim Jang-soo, director of national security for President Park Geun-hye, came three days after the South Korea’s defense minister said that the North had moved to its east coast a missile with a “considerable range” but not capable of reaching the mainland United States.

Mr. Kim said that the North Korean authorities had told foreign embassies in Pyongyang to inform them by Wednesday whether they needed assistance in evacuating should they wish to because of rising tensions on the peninsula.

The North gave a similar warning to some of the 123 South Korean factories in the joint industry park in the North Korean city of Kaesong, Mr. Kim said. For a fifth consecutive day, North Korea blocked South Korean workers and supplies from entering the factory park, forcing 13 plants to stop production as of Sunday.

The Kaesong complex is the last remaining major project of inter-Korean cooperation and a crucial test of whether North Korea was willing to sacrifice a lucrative source of hard current to push its political and military priorities.

“We believe this is a calculated move by the North,” Mr. Kim said during a meeting of security-related officials on Sunday. The North, he said, “may launch a provocation, such as missile launch,” around Wednesday, he said.

His comments were relayed by Kim Haing, a presidential spokeswoman.

“North Korea has been engaged in a so-called headline strategy,” Mr. Kim, the national security director, said, referring to an almost daily drumbeat of North Korean threats that has made newspaper headlines since early March.

North Korea was raising tensions in an effort to frighten and force the United States and South Korea to return to dialogue with possible concessions, Mr. Kim said. The pressure was also aimed at China and Russia to mediate on North Korea’s behalf.

“We see through their motive," he said. Although North Korea shows no signs of attempting a full-scale war, it will suffer damage many times more than we doif it launches even a localized provocation.”

South Korea “has no intention of attempting premature dialogue just because of a crisis,” Mr. Kim said, urging the North to ease tensions so dialogue can start.

A Chinese Foreign Ministry spokesman Hong Lei said on Sunday that the Chinese embassy in Pyongyang was operating normally, and urged the North to "thoroughly ensure the safety of Chinese embassy and consular personnel resident in North Korea." The Xinhua News Agency on Saturday quoted Foreign Minister Wang Yi as telling United Nations Secretary-General Ban Ki-moon that Beijing would “not allow trouble on China’s doorstep.”

Also on Sunday, Gen. Jung Seung-jo, chairman of the Joint Chiefs of Staff of the South Korean military, postponed plans to meet with his American counterpart, Gen. Martin E. Dempsey, in Washington on April 16, military officials said. General Jung could not be away from South Korea amid the rising tension, the officials said.

South Korea’s military is on heightened alert after North Korean threats to strike the United States and its allies. North Korea has been angry over United Nations sanctions imposed on it for its February nuclear test and joint American-South Korean military drills.

Washington responded by flying nuclear-capable bombers over South Korea in training missions and moving two of the Navy’s missile-defense ships closer to the Korean Peninsula. It also planned to deploy a land-based missile-defense system to Guam later this month.


Christopher Buckley contributed reporting from Hong Kong.
Posted by Steve Douglass at 8:11 AM No comments: