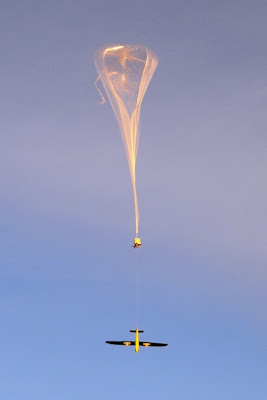 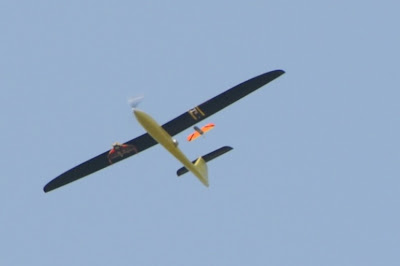 The ADD concept is to enable small unmanned air vehicles (UAV) equipped with sensor payloads to be launched from aircraft (manned or unmanned),

“The mission profile is straight forward,” says Chris Bovais, aeronautical engineer and flight test coordinator, NRL Vehicle Research Section. “The CICADA is dropped from another airborne platform, flies to a single waypoint, and then enters an orbit. It descends in that orbit until it reaches the ground.”

The NRL developed CICADA Mark III UAV is a glider; it has no propulsion source onboard, therefore. It requires another airborne platform to get it to an altitude such that it can glide to its destination. Its lack of a motor and small size, make it nearly undetectable in flight.

The ADD field trials successfully demonstrate that the CICADA can perform a precision delivery of a notional payload after being dropped from a ‘mother-ship’ or being carried aloft by a balloon. Standoff distances of 30 nautical miles and altitudes up to 57,000 feet were demonstrated, with an average landing error of 15 feet from the commanded location.

During the demonstration, the UAV ensemble was lifted to altitude using balloons operated by Aerostar International. A UASUSA built Tempest UAV, with two

Tempest CICADA test drop
CICADA vehicles attached on wing-mounted pylons, was carried aloft to altitudes approaching 60,000 feet. The Tempest mother ship was released from the balloon, autonomously executed a pull-up maneuver, and then carried the two CICADAs to a drop location. Each CICADA vehicle was then released from the mother ship and autonomously flew to the preprogrammed target waypoint.

“Many remote sensors are currently hand emplaced,” said Bovais. “The CICADA allows for the low-cost delivery of multiple precision-located sensors without placing the warfighter in harm’s way.”

The CICADA Mark III is a unique vehicle. The airframe is simply a printed circuit board also serving as the autopilot, the first known multi-purpose

CICADA MK III
airframe/avionics implementation of its kind. This novel construction method significantly reduces assembly time, minimizes wiring requirements, and enables the manufacture of low-cost and rugged micro air vehicles. The airframe shape is easily scaled to accommodate various payload sizes and potential acoustic, magnetic, chemical/biological and SIGINT sensors. Unique to this construction technique, additional electronic payloads can be inserted into the system by updating the printed circuit board artwork and ‘re-winging’ the aircraft.

A custom autopilot for the CICADA, both hardware and software, was developed by the Vehicle Research Section to be both inexpensive and robust. The only flight sensors are a 5Hz GPS receiver and a two-axis gyroscope. Although having minimal sensors, the navigation solution and the flight controller proved to be quite robust during in-flight testing, routinely recovering from tumbling launches. The flight controller also included a custom NRL algorithm that accurately estimated wind speed and magnitude, despite having no air data sensors onboard.

A stealth US drone that crashed in Iran last week was part of a Central Intelligence Agency reconnaissance mission which involved both intelligence community and military personnel stationed in Afghanistan, two U.S. officials tell CNN. The officials said they did not believe the mission involved flying the drone directly over Iran because the reconnaissance capability of the-RQ 170 drone allows it to gather information from inside Iran while remaining on the Afghanistan side of the border. The officials also for the first time acknowledged to CNN it was an RQ-170 drone that was lost.

When the drone crashed in Iran late last week, the U.S. briefly considered all potential options for retrieving the drone or bombing the wreckage, according to a third official. But those ideas were relatively quickly discarded as impractical, the official said. There was also satellite surveillance over the site which helped confirm the location of the wreckage before the Iranians retrieved it.

All of the officials have direct knowledge of the events, but spoke on the condition of anonymity because of sensitive intelligence matters. CIA officials have declined to comment.

Indications of the intelligence community’s involvement in the drone incident emerged over the weekend when the International Security Assistance Force in Afghanistan issued a vaguely worded statement saying, ” "The UAV to which the Iranians are referring may be a U.S. unarmed reconnaissance aircraft that had been flying a mission over western Afghanistan late last week. The operators of the UAV lost control of the aircraft and had been working to determine its status." Several coalition officials said at the time they had no direct knowledge of the incident and they were essentially ordered to put out this statement. It is significant that the statement only says “operators” of the UAV without saying which part of the military or US government might have been operating it, one coalition official said.

American officials are discounting the Iranian claim they shot the drone down and insist the crew lost flight control and the drone then entered Iranian airspace.
Posted by Steve Douglass at 1:17 PM No comments:

The officials said Iran’s military appears to be in possession of one of the more sensitive surveillance platforms in the CIA’s fleet, an aircraft that was shaped and designed to evade enemy defenses.

The mission of the downed drone remains unclear. Iran, a longtime adversary of the United States, is believed by U.S. intelligence agencies to be pursuing the development of a nuclear weapon and is also accused of providing support to anti-coalition elements in both Iraq and Afghanistan.

The RQ-170 has been used by the CIA for highly sensitive missions into other nations’ airspace, including months of surveillance of the compound in Pakistan in which Osama bin Laden was hiding before he was killed in a May raid by Special Operations forces.

A statement issued by the International Security Assistance Force in Afghanistan on Sunday said that the downed drone “may be a U.S. unarmed reconnaissance aircraft that had been flying a mission over western Afghanistan late last week. The operators of the UAV lost control of the aircraft and had been working to determine its status.”

U.S. officials insisted Monday that the statement was technically accurate, noting that it did not explicitly assert that the aircraft was being operated by ISAF or the U.S. military. Instead, the language of the statement was ambiguous about the drone’s ownership and mission. The CIA’s role in operating the plane was first reported Monday by NBC News.

Some U.S. officials began to cast doubt on the ISAF statement almost as soon as it was released. Current and former U.S. defense officials said it was unlikely that the military would be using a highly sophisticated stealth aircraft — one presumably in relatively short supply — for surveillance operations over western Afghanistan.

The statement’s suggestion that U.S. pilots lost control of the aircraft was accurate, according to U.S. officials who have disputed claims by Iran that its defense forces downed the aircraft, or that it had been felled by a sophisticated cyberattack.

Although the ISAF statement said that the drone was flying “a mission over western Afghanistan,” CIA drones are generally used to conduct surveillance as well as strikes beyond that country’s borders, most notably in Pakistan. The agency’s aircraft do take off from and land at air bases in Afghanistan, however. There is no indication that the drone lost in Iran was armed.

The RQ-170 has special coatings and a batwing shape designed to help it penetrate other nations’ air defenses undetected. The existence of the aircraft, which is made by Lockheed Martin, has been known since 2009, when a model was photographed at the main U.S. airfield in Kandahar, Afghanistan.

Staff writer Greg Jaffe contributed to this article.
Posted by Steve Douglass at 5:45 AM No comments: