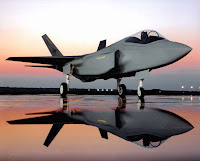 Lockheed Martin and Pentagon officials confirmed Sept. 22 that the company has reached an agreement with the Pentagon on the highly anticipated buy of 32 F-35 Joint Strike Fighters, known as the low rate initial production lot 4 (LRIP-4).

"The negotiated price is below the independent cost estimate prepared earlier this year and reflects the contract type deemed most efficient by the Department," a Pentagon statement said. "The Department believes this contract is a fair and reasonable basis for LRIP-4 and sets the appropriate foundation for future production lots."

Officials from both organizations have said that the 32 jets will cost as much as 20 percent less than the DoD's December prediction of $76 million in 2010 dollars.

The fixed-priced LRIP-4 deal is seen as critical to Lockheed's ability to deliver the jets on time and on budget.

Since early summer, Lockheed officials have indicated that the deal has been close to signing. Last week, Tom Burbage, the company's vice president of F-35 operations, blamed the delays on tough bargaining stances by both sides over the cost of the jets.
Posted by Steve Douglass at 8:03 PM No comments:

Finally! Russia refuses to sale arms to a terrorist state.

The S-300 would have boosted Iran's air defences
The Kremlin has formally banned the sale of S-300 air defence missile systems to Iran three months after new UN sanctions.

A decree was issued by President Dmitry Medvedev prohibiting the sale, which had been in the pipeline for years.

Earlier, Gen Nikolai Makarov, head of Russia's general staff, confirmed that the missiles were "definitely" subject to the sanctions introduced in June.

At that time, Russia's foreign minister said the S-300 deal was not affected.

Possession of S-300 systems would enhance Iran's defence of its nuclear facilities against attack from the air.

Mr Medvedev's decree, published on Kremlin website, lists the S-300 among military items which must not be exported to Iran under the fourth round of sanctions imposed by the UN Security Council on Iran over its nuclear programme.

"The decision has been taken not to supply S-300 [systems] to Iran," Gen Makarov said at Ramenskoye airport outside Moscow, shortly before the decree was published.

"They are definitely subject to sanctions."

Asked if Russia had torn up its contract with Iran, he replied: "We'll see. That will depend on how Iran behaves."

Back in June Foreign Minister Sergei Lavrov said the new sanctions would not affect the S-300 contract.

However, shortly afterwards, Prime Minister Vladimir Putin was quoted by French media as saying the sale had been suspended.

There has long been speculation that Israel may attempt to bomb Iranian facilities to prevent Iran acquiring nuclear weapons.

Iran denies seeking nuclear weapons, insisting that its programme is purely civilian
Posted by Steve Douglass at 7:56 PM No comments: 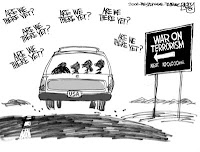 Washington (CNN) -- The terrorism threat against the United States has evolved, with homegrown terrorists and a greater diversity in the scope and methods of attack making it more difficult to prevent them, top security officials told a Senate committee Wednesday.
"It is diversifying in terms of sources; it is diversifying in terms of tactics," Homeland Security Secretary Janet Napolitano told the Senate Homeland Security Committee. "The results of these changing tactics are fewer opportunities to detect and disrupt plots."

The hearing focused on the terrorism threat in the nine years since the September 11, 2001, attacks on the United States.

Napolitano, along with FBI Director Robert Mueller and Michael Leiter, the director of the National Counterterrorism Center, said the number of terrorist attacks against the United States increased in the past 15 months.

In particular, they cited the Fort Hood, Texas, shootings; the failed Christmas Day bombing of a U.S. airliner; and the failed car bomb attempt in New York City's Times Square as examples of the increasing attacks.

Sen. Susan Collins of Maine, the panel's ranking Republican, called the increased attacks "alarming and significant."
"The past two years have taught us through harsh lessons that we simply must increase our efforts," Collins said.

Napolitano said the nature of terrorist attacks continues to evolve, with recent attacks coming faster and with "less extensive pre-operational planning than previous attempts and with fewer linkages to international terrorist organizations."

"There is a rising threat from attacks that use improvised explosives devices, other explosives, and small arms," she said in a written statement presented to the committee. "This type of attack has been common in hot spots around the world for some time, but we have now experienced such attempted attacks in the United States."

Unlike the highly planned large-scale September 11, attacks, the smaller-scale attacks seen now require "less planning and fewer pre-operational steps," Napolitano's statement said.
"Accordingly, there are fewer opportunities to detect such an attack before it occurs," she added.
While al Qaeda remains a major international threat, other foreign terrorist groups that affiliate with al Qaeda or follow in its steps have increased in number, the officials noted.

They also cited an increase in self-radicalized Americans, often by exposure to internet postings by foreign terrorist groups.
After the 2001 attacks, U.S. counterterrorism efforts were criticized for a lack of coordination among agencies.

Efforts to increase coordination under the umbrella of Leiter's counterterrorism center came into question after the failed Christmas Day airline bombing, when it was revealed that relevant information never raised sufficient alarm to stop the suspect from boarding the plane.
Napolitano's statement said her department is increasing "fusion centers" that help share intelligence among security agencies, adding that the number of centers has grown from "just a handful" in 2006 to 72 today.

Asked if the increased attempts to attack the United States would continue, the officials said they must assume that they will.

"I do think it is, in part, contingent on what happens overseas, whether it be in Yemen or Somalia or Pakistan," Mueller said. Efforts to minimize the influence of radical groups in those places could reduce their ability to attack the United States, he said.
Leiter, however, said there is no sign that overseas radicals are diminished in their influence or abilities.

The hearing, which was largely collegial in tone, took a slight departure when Sen. John McCain, R-Arizona, suggested that Napolitano, Arizona's former governor, had shifted her concerns about border enforcement since becoming secretary of homeland security.
"Where I sit has not changed my position," Napolitano said.
"Clearly you have [changed positions]," McCain replied.

"What we have done in the past two years is put more resources at the southwest border than ever before both in terms of federal [resources] and providing resources to the states," Napolitano said.
She said reports that her department would not deport people unless they had committed serious crimes are inaccurate, although she said detention space is limited and priority is given to deporting aliens who are felons or gang members.
Posted by Steve Douglass at 7:51 PM No comments: