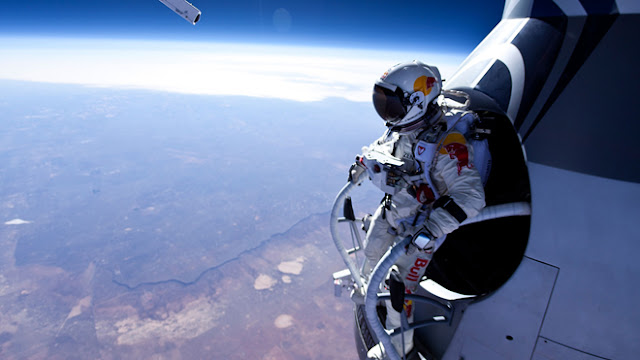 Austrian daredevil, Felix Baumgartner, 43, aviation pioneer, B.A.S.E jumper and a world renowned extreme athlete is all set to break not only one but a number of world records. For this purpose he along with Red Bull Stratos team which whom he has been practicing for years to break the record of the highest altitude jump which was set 52 years ago. A special capsule has been prepared for this purpose.
It had been through a series of tests at an altitude chamber in Brooks City Base in San Antonio, Texas. This capsule that weighed 1.315 kgs was the one in which Baumgartner used to test jump from an altitude of 29,610 meters in July this year at a speed of 864 kmph. Now on October 8th, Baumgartner will attempt the world record once again wherein he will be breaking records for highest speed in freefall, highest jump, highest manned balloon flight and longest freefall.
The balloon itself is made of plastic, 1/10th the thickness of a Ziploc bag and is an 850.000 cubic meter helium balloon. Weather conditions permitting, Baumgartner will attempt this feat at Roswell, New Mexico where he will jump from an altitude of 36,576 meters. If successful this will be the world's highest ever skydive. The current record for the same feat stands at 31,333 meters and was set in 1960 by US Air Force Capt. Joe Kittinger who now serves as the adviser for Baumgartner's mission.
For more information CLICK HERE
Posted by Steve Douglass at 9:23 AM No comments: