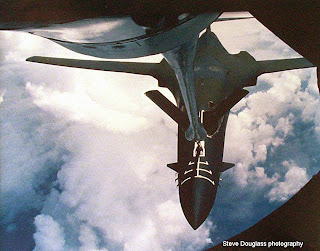 SIOUX FALLS, S.D. — Flights were resuming out of Ellsworth Air Force Base in South Dakota on Thursday, three days after a B-1B bomber crashed in a remote area of southeastern Montana, an Air Force official said.

Two pilots and two weapons system officers safely ejected Monday morning before the South Dakota-based bomber crashed near Broadus, in southeastern Montana.Col. Brooks McFarland, commander of the 28th Maintenance Group, said the cause of the crash remains under investigation. He said crews at Ellsworth have carefully inspected all of the B-1Bs for airworthiness before releasing them to fly.

Col. Kevin Kennedy, commander of the 28th Bomb Wing, said the base temporarily shut down flights until maintenance and operations group commanders could ensure Kennedy that it was safe to resume normal flying operations. Kennedy said he made the decision Thursday that flights would recommence that day.

“B-1s have continued their missions elsewhere, and I have been in contact with the maintenance leadership of those units,” McFarland said in a statement. “With no evidence of fleet-wide problems, it is important that we resume flying and keep proficient at our primary mission.”

The last time a B-1B was destroyed in a crash was on Dec. 12, 2001, when a bomber involved in the war in Afghanistan slammed into the Indian Ocean near the island of Diego Garcia. In April 2008, an Ellsworth B-1B bomber caught fire after landing at al-Udeid Air Base in Qatar.

Five days later the airspace over the crash area (encompassing a 240 mile area) is still under DOD restrioctions. View the TFR here.
Posted by Steve Douglass at 7:59 AM No comments: