US Navy : "attempts to block the Strait of Hormuz will "not be tolerated," 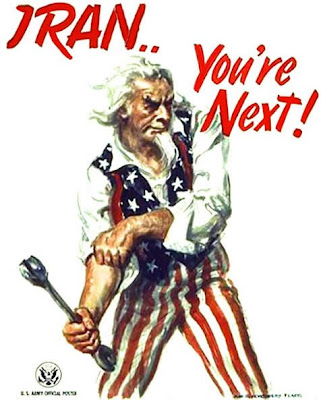 CBS/AP) The U.S. Navy said any attempts to block the Strait of Hormuz would "not be tolerated," after Iranian officials threatened to choke off the key oil supply route.

Iran's navy chief warned Wednesday that his country can easily close the strategic strait at the mouth of the Persian Gulf, the passageway through which a sixth of the world's oil flows.

It was the second such warning in two days. On Tuesday, Vice President Mohamed Reza Rahimi threatened to close the strait, cutting off oil exports, if the West imposes sanctions on Iran's oil shipments.

In response, the Bahrain-based U.S. 5th Fleet's spokeswoman warned that any disruption "will not be tolerated." The spokeswoman, Lt. Rebecca Rebarich, said the U.S. Navy is "always ready to counter malevolent actions to ensure freedom of navigation."

With concern growing over a possible drop-off in Iranian oil supplies, a senior Saudi oil official said Gulf Arab nations are ready to offset any loss of Iranian crude.

The Iranian threats underline Tehran's concern that the West is about to impose new sanctions that could target the country's vital oil industry and exports.

Western nations are growing increasingly impatient with Iran over its nuclear program. The U.S. and its allies have accused Iran of using its civilian nuclear program as a cover to develop nuclear weapons. Iran has denied the charges, saying its program is geared toward generating electricity and producing medical radioisotopes to treat cancer patients.

The U.S. Congress has passed a bill banning dealings with the Iran Central Bank, and President Barack Obama has said he will sign it despite his misgivings. Critics warn it could impose hardships on U.S. allies and drive up oil prices.

The bill could impose penalties on foreign firms that do business with Iran's central bank. European and Asian nations import Iranian oil and use its central bank for the transactions.

With concern growing over a possible drop-off in Iranian oil supplies, a senior Saudi oil official said Gulf Arab nations are ready to step in if necessary and offset any potential loss of Iranian crude in the world markets.

Reflecting unease over the rising tensions, the U.S. benchmark crude futures contract for February delivery was above $101 per barrel in electronic trading on the New York Mercantile Exchange. Its London-based Brent counterpart fell slightly, but still remained above $109 per barrel on the ICE Futures exchange.

Iran is the world's fourth-largest oil producer, with an output of about 4 million barrels of oil a day. It relies on oil exports for about 80 percent of its public revenues.

Iran has adopted an aggressive military posture in recent months in response to increasing threats from the U.S. and Israel that they may take military action to stop Iran's nuclear program.

The navy is in the midst of a 10-day drill in international waters near the strategic oil route. The exercises began Saturday and involve submarines, missile drills, torpedoes and drones. The war games cover a 1,250-mile stretch of sea off the Strait of Hormuz, northern parts of the Indian Ocean and into the Gulf of Aden near the entrance to the Red Sea as a show of strength and could bring Iranian ships into proximity with U.S. Navy vessels in the area.

Iranian media are describing how Iran could move to close the strait, saying the country would use a combination of warships, submarines, speed boats, anti-ship cruise missiles, torpedoes, surface-to-sea missiles and drones to stop ships from sailing through the narrow waterway.

Iran's navy claims it has sonar-evading submarines designed for shallow waters of the Persian Gulf, enabling it to hit passing enemy vessels.

A closure of the strait could temporarily cut off some oil supplies and force shippers to take longer, more expensive routes that would drive oil prices higher. It also potentially opens the door for a military confrontation that would further rattle global oil markets.

Iran claimed a victory this month when it captured an American surveillance drone almost intact. It went public with its possession of the RQ-170 Sentinel to trumpet the downing as a feat of Iran's military in a complicated technological and intelligence battle with the U.S.

American officials have said that U.S. intelligence assessments indicate the drone malfunctioned.
Posted by Steve Douglass at 12:39 PM No comments:

Iran threatening to block the Strait of Hormuz 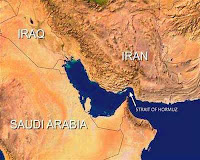 (CNN) -- It is just 34 miles (55 kilometers) wide and dotted with islands and rocky outcrops, a channel that links the Persian Gulf with the Indian Ocean. Like many marine chokepoints, the Strait of Hormuz has long commanded the attention of empires and their navies.

And in recent decades it has become even more critical: One-third of the oil carried by sea passes through Hormuz -- that's some 15 million barrels every day, according to the U.S. Energy Information Administration.

Now Iran's vice president is warning that the Islamic Republic could block the strait if sanctions are imposed on its exports of crude oil. France, Britain and Germany have proposed such sanctions as punishment for Iran's lack of cooperation on its nuclear program.

To demonstrate its intent, Iran is holding a 10-day military exercise in an area from the eastern part of the strait out into the Arabian Sea, with some elements playing the part of enemy forces. Western diplomats describe the maneuvers as further evidence of Iran's volatile behavior, following the occupation of the British Embassy in Tehran. And it's not the first time Iran has used this vital sea lane in a high-stakes game of brinkmanship.

The strait is thought to have been named for the Persian word hur-mogh, the date palm found on the coast. It was mentioned in a first-century mariner's account, "The Periplus of the Erythtraean Sea," and through the ages was known for its pearls.
Iran's military might in Iraq Iran military posturing Iran-Iraq alliance unlikely, expert says

But as oil became the lubricant of the world economy, the Strait of Hormuz -- and the sea lanes leading to it -- became a geostrategic flashpoint. So narrow is the strait, with sea lanes just two miles wide heading in and out of the gulf, that ships must pass through Iranian and Omani territorial waters.

In addition, Iran and the United Arab Emirates dispute sovereignty over several islands close to the strait.

Iran last tried to disrupt and sabotage Persian Gulf shipping during its decade-long conflict with Iraq, when the Arab gulf states were funding Saddam Hussein's war effort. When Iraq began attacking Iranian tankers in 1984, Iran responded by targeting vessels headed to and from gulf ports. And it began a guerrilla war at sea -- laying mines in shipping lanes.

That led the U.S. to provide military escorts for Kuwaiti shipping. In 1988, an Iranian mine damaged and nearly sank the USS Samuel B. Roberts, prompting U.S. President Ronald Reagan to order retaliatory strikes against Iranian oil platforms and naval vessels. Two platforms -- Sirri and Sassan -- were destroyed and an Iranian warship sunk in Operation Praying Mantis.

Since then, the U.S. has increased cooperation with the navies of gulf Arab states and established the headquarters of the U.S. Fifth Fleet in Bahrain.

But Iran's neighbors understand that their reliance on the strait to transport oil and liquefied natural gas remains vulnerable. According to U.S. diplomatic cables, Iraqi Prime Minister Nuri al-Maliki said in December 2009 that "Iraq would be the hardest hit" if tensions led Iran to try to blockade the strait. Kuwaiti officials have suggested building a 1,000-mile land pipeline to the Gulf of Oman to reduce reliance on the maritime route.

Today, after decades of sanctions, Iran does not have the naval power to block the strait, and its aging air force would be no match for U.S. and gulf state fighter jets. But military experts say Iran could wage "asymmetrical warfare" -- involving mines and attacks by Revolutionary Guards' patrol boats. It has also developed a class of small submarines, three of which were launched last month, according to the Iranian naval commander quoted by the Fars news agency.

Even bellicose language from Iranian politicians has already caused jitters in oil markets. Earlier this month an Iranian legislator, Parviz Sarvari, warned: "Soon we will hold an exercise on closing the Strait of Hormuz. If the world wants to make the region insecure, we will make the world insecure."

Any attempt to interfere with shipping would be a double-edged sword for Tehran. Iran also relies on the strait to export its crude and other products, and has to import most of its refined gasoline for lack of refining capacity. The U.S. State Department says there is "an element of bluster" in the Iranian threats.

Even so, analysts worry that the deterioration in U.S.-Iranian relations could magnify the consequences of a collision or provocation in the gulf. Shortly before retiring as chairman of the U.S. Joint Chiefs of Staff, Adm. Mike Mullen said: "If something happens, it's virtually assured that we won't get it right, that there will be miscalculations which would be extremely dangerous in that part of the world."

Trita Parsi, president of the National Iranian American Council, told CNN on Monday that an incident in the strait "could spark a wider war precisely because there's no communication, no diplomacy and no de-escalatory mechanisms between the United States and Iran."
Posted by Steve Douglass at 7:54 AM No comments: