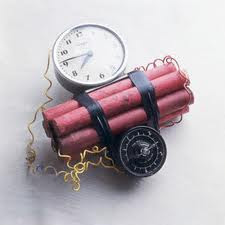 The explosion occurred about 4:30 p.m. at the entrance of the international arrivals section of Domodedovo Airport, Itar-Tass said, citing a spokeswoman for the Russian Investigative Committee, Tatyana Morozova.
State TV aired video of the smoke-filled terminal, including what appeared to be bodies and luggage on the ground.

The Russian National Anti-Terrorist Committee said 35 people were dead and 152 had been wounded in the explosion.
State TV, citing Russian authorities, said the bombing was the act of a suicide bomber who stuffed a homemade bomb with small metal objects to make it more deadly, then activated it in a crowded area where many people were either preparing for flights or waiting for arriving passengers. CNN could not independently verify those claims.

A heavy police presence remained outside of the airport nearly four hours after the explosion, and more than 10 ambulances with lights flashing and sirens screeching left the airport.


Incoming flights scheduled to land at Domodedovo were being diverted to Moscow's other airports, Sheremetyevo and Vnukovo, Russian TV said.
However, airport spokeswoman Yelena Galanova told Russian state TV that the airport was "operating as usual."

"There have been no departure delays. We were shut for only about 20 minutes after the explosion," she told state TV.
An airport employee, Andrei Surkov, told CNN that while the international arrivals area is still closed, international passengers were being routed through the domestic terminal located on the other end of the airport.


Lufthansa spokeswoman Claudia Lange said the airline has suspended all flights to Domodedovo until further notice.

Elina Bakhtina told state TV she was at the airport cafe she owns when the explosion occurred.

"The blast must have been very strong, because our cafe is about 100 meters from the arrivals area. When we heard the blast, glass just started falling from the ceiling," she said.

Tatyana Papova, who was waiting at passport control when the explosion occurred, told state TV that escalators stopped working at the baggage claim area and airport employees started breaking down walls to help clear people from the area.
Domodedovo is 22 kilometers (14 miles) southeast of Moscow. According to the airport's website, it is the largest of Moscow's three airports, as well as the busiest in terms of passenger traffic.

NATO Secretary General Anders Fogh Rasmussen condemned the attack and urged greater cooperation in the fight against terrorism.
British Foreign Secretary William Hague said British officials are "in urgent contact with Russian authorities to establish the facts and to provide consular support to any British nationals who may have been affected."

Will Geddes, terrorism expert and managing director of International Corporate Protection Group, called the bombing a "very significant terror strike."
"To strike in the airport -- which is fundamentally believed and understood by many to be one of the most secure types of installations in a city or in a country -- to have such a devastating an attack with such a tragic result, means that they had planned this considerably well and gone ahead in achieving their aims," he said.

Russia has a long history of dealing with terror attacks.
Most recently, female suicide bombers struck the Moscow metro during rush hour in March, setting off two explosions that killed at least 38 people and wounded more than 60 others. Chechen rebels claimed responsibility for that attack.
In November 2009, an explosive device derailed an express train, killing at least 26 people.
Posted by Steve Douglass at 10:05 AM No comments: 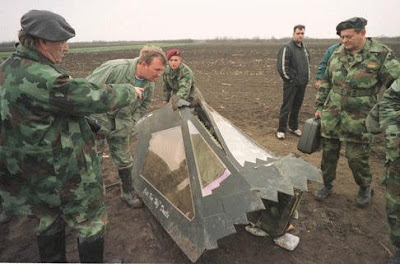 China was able to build its first stealth bomber using technology gleaned from a downed U.S. fighter, it has been claimed.

Beijing unveiled its state-of-the-art jet – the Chengdu J-20 – earlier this month.
Military officials say it is likely the Chinese were able to develop the stealth technology from parts of an American F-117 Nighthawk that was shot down over Serbia in 1999.

Lift-off: China's J-20 stealth plane has made a successful test flight. Military officials say it is likely the Chinese were able to develop the stealth technology from parts of an American F-117 Nighthawk that was shot down over Serbia in 1999
Enlarge

It was during Nato's aerial bombing of Serbia during the Kosovo war, that an anti-aircraft missile shot a Nighthawk (pictured). It was the first time one of the 'invisible' fighters had ever been hit

The Pentagon believed a combination of clever tactics and luck had allowed a Soviet-built SA-3 missile to bring down the jet.

The pilot ejected and was rescued but the wreckage was strewn over a wide area of farmland.
Civilians collected the parts – some the size of small cars – as souvenirs.

‘At the time, our intelligence reports told of Chinese agents crisscrossing the region where the F-117 disintegrated, buying up parts of the plane from local farmers,’ says Admiral Davor Domazet-Loso, Croatia’s military chief of staff during the Kosovo war.

‘We believe the Chinese used those materials to gain an insight into secret stealth technologies... and to reverse-engineer them.’

A senior Serbian military official confirmed that pieces of the wreckage were removed by souvenir collectors, and that some ended up ‘in the hands of foreign military attaches’.

The fighter jet's successful test follows reports that China is planning to launch its first aircraft carrier and has tested a ballistic missile capable of sinking U.S. vessels in the Pacific.
The prototype jet was shown in flight, with civilians and air force personnel watching on, in pictures on several unofficial Chinese military websites, after local media outlets had claimed a successful test flight had taken place.

While the Chinese government is renowned for its stringent approach to state secrets, photos and reports of the J-20's test have remained online.

According to international agencies, the scheduling of the test flight to coincide with Mr Gates' visit to China, coupled with the seemingly relaxed approach to reports about the flight, indicated Beijing's willingness to be more open about its military intentions.
Nonetheless, reports of the stealth's successful test will do little to quell anxieties about the speed of China's military progress.

The U.S. F-22 Raptor is currently the only operational stealth fighter in the world, while Russia's Sukhoi T-50 jet is expected to enter active service in the next four years.
But pictures of China's J-20, which looks larger than the F-22 or T-50, will be of concern to the Taiwanese government, whose antiquated aircraft and radar systems would provide little resistance to radar-evading Chinese jets.

The U.S. has claimed China would not be capable of developing a stealth jet for years and production of the F-22 was recently capped.
But the J-20's successful test, coupled with reports of the development of an aircraft carrier and missile system, confirms China's growing military might. 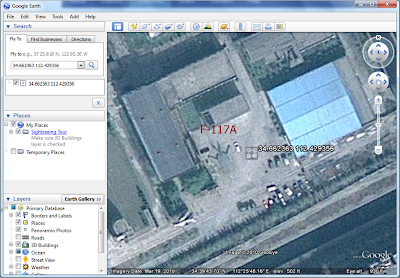 The image above, captured in March of 2010, depicts an F-117A mockup. Normally, a mockup of the F-117A wouldn’t be a very big deal, but this one is in the middle of Luoyang, China. First spotted by the intrepid members of the China Defense Forum, the mockup appears to be partially completed, apparently missing the forward fuselage.

Now what would an F-117A Stealth Fighter be doing in China? According to the article, the F-117A mockup is sitting at the Electro-Optical Technology Development Center in Luoyang, China. Apparently the center does R&D for Chinese air-to-air missiles.

By SIOBHAN GORMAN, AUGUST COLE and YOCHI DREAZEN
WASHINGTON -- Computer spies have broken into the Pentagon's $300 billion Joint Strike Fighter project -- the Defense Department's costliest weapons program ever -- according to current and former government officials familiar with the attacks.

Similar incidents have also breached the Air Force's air-traffic-control system in recent months, these people say. In the case of the fighter-jet program, the intruders were able to copy and siphon off several terabytes of data related to design and electronics systems, officials say, potentially making it easier to defend against the craft.

The latest intrusions provide new evidence that a battle is heating up between the U.S. and potential adversaries over the data networks that tie the world together. The revelations follow a recent Wall Street Journal report that computers used to control the U.S. electrical-distribution system, as well as other infrastructure, have also been infiltrated by spies abroad.
View Full Image

Attacks like these -- or U.S. awareness of them -- appear to have escalated in the past six months, said one former official briefed on the matter. "There's never been anything like it," this person said, adding that other military and civilian agencies as well as private companies are affected. "It's everything that keeps this country going."

Many details couldn't be learned, including the specific identity of the attackers, and the scope of the damage to the U.S. defense program, either in financial or security terms. In addition, while the spies were able to download sizable amounts of data related to the jet-fighter, they weren't able to access the most sensitive material, which is stored on computers not connected to the Internet.

Former U.S. officials say the attacks appear to have originated in China. However it can be extremely difficult to determine the true origin because it is easy to mask identities online.
Posted by Steve Douglass at 6:12 AM No comments: