Is Georgia on George's Mind? USAF to fly supplies into war-torn Tbillsi. 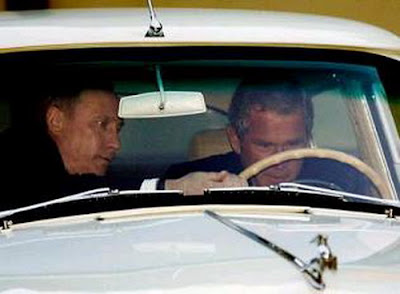 Air Force C-17s flew all of Georgia’s 2,000 troops deployed in Iraq to the Georgian capital, Tbilisi, on Sunday and Monday after the Georgian government recalled the troops and asked the U.S. to do so.

Pentagon officials are not releasing when or where the cargo aircraft will disembark or whether the supplies are humanitarian or military at this time due to security issues, according to Lt. Col. Elizabeth Hibner, a Defense Department spokeswoman.

“We will hopefully be able to say more this afternoon,” she said.

Russian Prime Minister Vladimir Putin criticized the U.S. for flying Georgia’s troops home from Iraq while Russia’s troops advanced into the country after fighting broke out over the disputed regions of South Ossetia and Abkhazia.

“It’s a pity that some of our partners, instead of helping, are in fact trying to get in the way,” said Putin at a Russian Cabinet meeting. “I mean, among other things, the United States airlifting Georgia’s military contingent from Iraq effectively into the conflict zone.”

Despite Medvedev’s call for a halt to military operations, the Georgian government has reported more attacks including air strikes against two Georgian villages
Posted by Steve Douglass at 7:18 PM No comments: 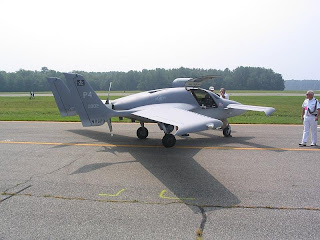 Editors note: Who needs to scope out Area 51 when they are flying UAVs over the Air Force Academy.

Posted : Tuesday Aug 12, 2008 16:12:43 EDT
The crash of unmanned plane at the Air Force Academy is under investigation by the National Transportation Safety Board.

The 9-foot-long plane, an experimental Raytheon Cobra, flew into a light pole July 28 as Raytheon Co. officials demonstrated the plane to academy staffers, according to the NTSB. No one on the ground was injured.

The propeller-drive Cobra took off from a road near the academy’s athletic fields. It performed all its preprogrammed maneuvers and was making its second landing attempt when it struck the light pole.

When the Cobra crashed around 12:30 p.m., it was under the control of its automated system. The Raytheon team had decided not to take manual control of the Cobra because they reportedly wanted to see if the aircraft would correct its own flight path, the NTSB said.

The impact left the right wing stuck in the light pole and the rest of the plane in pieces on the ground.
Posted by Steve Douglass at 7:10 PM No comments: Posted : Tuesday Aug 12, 2008 16:14:57 EDT
Nuclear inspectors will re-inspect the 5th Bomb Wing at Minot Air Force Base, N.D., this week after the wing failed its nuclear surety inspection last May due to a litany of security and leadership errors.

Last May’s inspection was the first since 5th Bomb Wing airmen mistakenly loaded six nuclear-tipped cruise missiles onto a B-52 Stratofortress last August and flew them to Barksdale Air Force Base, La., where the plane sat on the flight line unattended for hours.

DTRA inspectors gave the wing an “unsatisfactory” after the weeklong inspection concluded May 25, according to the report. Inspectors found one security forces airman playing video games on his cell phone while standing guard at a “restricted area perimeter” and another airman who was unaware of her “duties and responsibilities,” the DTRA report said.

Read the full story at: airforcetimes.com
Posted by Steve Douglass at 7:02 PM No comments: 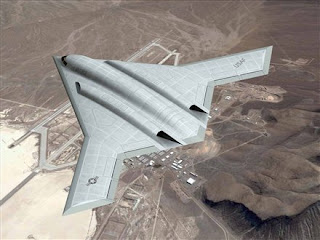 In its 1999 “Bomber Roadmap,” the Air Force famously declared that it had no need for a new long-range strike aircraft until 2037. It soon wavered but did not change course by much. Then, early in 2006, the Pentagon’s Quadrennial Defense Review set a new goal: USAF, the QDR decreed, will have a new bomber ready for combat in 2018. That marked the birth of the “2018 Bomber.”

After nearly 20 years out of the bomber development business, the Air Force faced a tough task. The service last year completed an analysis of alternatives for the projected aircraft. It determined its preferred characteristics. It declared the 2018 Bomber to be No. 5 among all of its modernization priorities.

Read the entire story at Air Force Times. See the link under the "Topical Links" menu at the upper right.
Posted by Steve Douglass at 6:32 AM No comments:


LAS VEGAS — India’s military pilots are expected to participate for the first time in Air Force training exercises above the Nevada desert, marking another step in steadily improving U.S. relations with the Asian subcontinent nation since the Sept 11 terrorist attacks.

South Korean and French pilots will also take part in the combat exercises that begin Monday and will put about 65 airplanes in the skies over two weeks, Air Force officials said.

“This particular Air Force exercise is important because India is included among some very important allies,” said Christine Fair, a South Asia specialist at the Rand Corp., a nonprofit think tank. “This is definitely an extension of an arc that has been mapped out since 2000, and it really signifies that India and the United States have is a strategic relationship.”

The Indian and U.S. militaries had little interaction during the Cold War, when India was more closely aligned to the Soviet Union and the U.S. was seen as an ally of Pakistan, India’s neighbor and rival.

But relations have improved, with increasing political, economic and military ties. The Sept. 11 attacks in the U.S. and the subsequent fight against terrorism brought the two sides even closer.

Military ties have expanded rapidly since then, with a series of joint exercises in the air, on land and at sea. Analysts said the U.S. is eager to use India as a counterbalance to China in the region.

India is also extremely worried about China’s growing military and political influence in the region and has upped its military spending.

The strongest negative reaction to the joint military exercises would most likely come not from China but from North Korea, said Jing-dong Yuan, a nonproliferation expert at the Monterey Institute of International Studies.

“Pyongyang, through its state-run news agency, the Korean Central News Agency, has consistently and passionately criticized such ventures accusing the United States of harboring hostile intentions toward North Korea,” Yuan said. “Beijing would likely remain reticent [about] such training since it does not see itself as directly and imminently affected by such activities.”

The Air Force exercises are not designed to target any specific country or threat but to test how the forces would work together during large-scale missions, said Capt. Marcus Wilson, team chief for the exercises.

“We will learn how our allies operate in response to similar threats,” Wilson said in a statement. “It will allow us to build observations to eventually learn those lessons about what it takes to integrate, talk, fly with, employ, deploy and sustain air power with places like India, Korea and France.”

Wilson said more than 1,000 people would participate in simulations ranging from bomb-dropping to hostage rescue.

A growing military alliance between the U.S. and India would be welcomed by U.S. firms eager to get a share of the arms market in India, where Russia has long been the prime supplier. India has already agreed to buy six of Lockheed’s C-130J Hercules airlift aircraft for roughly $1 billion.

Boeing Corp. and Lockheed Martin are among those bidding on a $10 billion deal with India to supply 126 fighter aircraft.
Posted by Steve Douglass at 6:19 AM No comments: 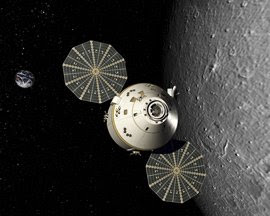 NASA has put off the planned launch of its next-generation Orion spacecraft for a year, a setback to efforts to fly a successor to its aging space shuttles, the space agency announced Monday.

"September 2014 is when we are saying we will launch the first crew on the Orion," program manager Jeff Hanley told reporters in a conference call Monday.

NASA officials plan to wrap up assembly of the International Space Station and retire the space shuttle fleet in 2010, freeing up money to build and fly the new spacecraft. Cost concerns are at the root of the delay, but NASA is also giving itself wiggle room to deal with the unforeseen technical problems that will inevitably crop up, Hanley said.

Read the full story at CNN..com
Posted by Steve Douglass at 6:07 AM No comments: