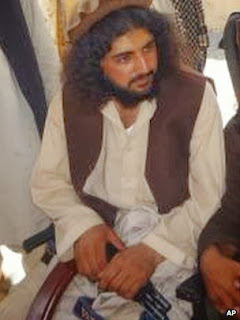 BBC: US forces have captured a senior Pakistan Taliban commander, Latif Mehsud, in a military operation, the state department has confirmed.

Spokeswoman Marie Harf described Latif Mehsud as a "terrorist leader" and a "senior commander" in the Tehreek-e-Taliban Pakistan.

She gave no details of the operation.

She said he was a close confidante of the group's leader, Hakimullah Mehsud, who this week gave a rare interview to the BBC about possible peace talks.

Ms Harf said the Pakistan Taliban (TTP) were held responsible for the attempted bombing of Times Square in 2010, as well as attacks on US diplomats in Pakistan and many Pakistani civilians.

The group "had also vowed to attack the US homeland again," Ms Harf said.

An Afghan provincial official earlier told Associated Press news agency that Latif Mehsud was arrested as he was driving on a highway in Afghanistan's eastern Logar province.

The arrest took place about a week ago, the official said.

Latif Mehsud was reportedly returning from a meeting to discuss swapping prisoners.

The Washington Post said that US forces had taken him from Afghan intelligence agents who were trying to recruit him as a go-between for peace talks.

A spokesman for President Hamid Karzai, Aimal Faizi, told the Post: "The Americans forcibly removed him and took him to Bagram."

Mr Faizi said Latif Mehsud had only agreed to meet Afghan operatives after months of negotiations.

Some reports say Mr Karzai, who is currently holding talks with visiting US Secretary of State John Kerry, was furious about the US operation.Arsallah Jamal, governor of Logar province in eastern Afghanistan, said Mehsud was captured a week ago as he was driving along a main highway in Mohammad Agha district. The road links the province with the Afghan capital, Kabul. Jamal said Mehsud was in a car with two or three other men when the U.S. military arrested him.

The Pakistani Taliban confirmed the capture but claimed Mehsud was seized Oct. 5 by the Afghan army at the Ghulam Khan border crossing in the eastern province of Khost.

He was returning from a meeting to discuss swapping Afghan prisoners for money, said Pakistani Taliban commanders and intelligence officials, speaking on condition of anonymity because they were not authorized to speak with the media.

The Pakistani intelligence officials said American forces seized Mehsud while he was with the Afghan army, and that they no longer know where he is.

Mehsud, believed to be around 30 years old, once served as Hakimullah Mehsud's driver but eventually became a trusted deputy. The two are not related. Mehsud is a common name in the region.

The U.S. military in Kabul referred all questions to the Defense Department in Washington. A Pentagon spokeswoman, Navy Cmdr. Elissa Smith, said the Pentagon had no comment on the report.

A U.S. defense official said Mehsud was being lawfully held by U.S. military forces in Afghanistan. A senior U.S. official said the arrest did not please Afghan President Hamid Karzai, who apparently saw it as a violation of Afghan sovereignty. Both officials spoke on condition of anonymity because they were not authorized to speak about the issue with the media.

A spokesman for Karzai told the Washington Post that a senior Taliban commander was captured in Logar as he was being driven to a facility operated by the intelligence service for questioning. The spokesman, Aimal Faizi, said the commander, whom he did not name, was then taken to an American detention facility in Bagram.

There was no immediate comment from Karzai's office on the report.

The detention may have contributed to a series of emotional outbursts this week by Karzai, who alleged that the U.S. and NATO have inflicted suffering on the Afghan people and repeatedly have violated its sovereignty.

There were reports that talks over the past two weeks on a bilateral security agreement were delayed because of the incident. American and Afghan officials have been meeting in recent days to negotiate the final details of the deal.

READ THE REST OF THE STORY AT THE BBC HERE.

Posted by Steve Douglass at 1:20 PM No comments:

2009 suspicions about Snowden slipped through the cracks ...

NYTIMES: WASHINGTON — Just as Edward J. Snowden was preparing to leave Geneva and a job as a C.I.A. technician in 2009, his supervisor wrote a derogatory report in his personnel file, noting a distinct change in the young man’s behavior and work habits, as well as a troubling suspicion,

The C.I.A. suspected that Mr. Snowden was trying to break into classified computer files to which he was not authorized to have access, and decided to send him home, according to two senior American officials.

But the red flags went unheeded. Mr. Snowden left the C.I.A. to become a contractor for the National Security Agency, and four years later he leaked thousands of classified documents. The supervisor’s cautionary note and the C.I.A.’s suspicions apparently were not forwarded to the N.S.A. or its contractors, and surfaced only after federal investigators began scrutinizing Mr. Snowden’s record once the documents began spilling out, intelligence and law enforcement officials said.

“It slipped through the cracks,” one veteran law enforcement official said of the report.

Spokesmen for the C.I.A., N.S.A. and F.B.I. all declined to comment on the precise nature of the warning and why it was not forwarded, citing the investigation into Mr. Snowden’s activities.

Half a dozen law enforcement, intelligence and Congressional officials with direct knowledge of the supervisor’s report were contacted for this article. All of the officials agreed to speak on the condition of anonymity because of the continuing criminal investigation.

In hindsight, officials said, the report by the C.I.A. supervisor and the agency’s suspicions might have been the first serious warnings of the disclosures to come, and the biggest missed opportunity to review Mr. Snowden’s top-secret clearance or at least put his future work at the N.S.A. under much greater scrutiny.

“The weakness of the system was if derogatory information came in, he could still keep his security clearance and move to another job, and the information wasn’t passed on,” said a Republican lawmaker who has been briefed on Mr. Snowden’s activities.

Mr. Snowden now lives in Moscow, where he surfaced this week for the first time since receiving temporary asylum from the Russian government over the summer. On Wednesday night, he met with four American whistle-blowers who have championed his case in the United States and who presented him with an award they said was given annually by a group of retired C.I.A. officers to members of the intelligence community “who exhibit integrity in intelligence.”

READ THE REST OF THE STORY AT THE NYTIMES
Posted by Steve Douglass at 7:17 AM No comments: