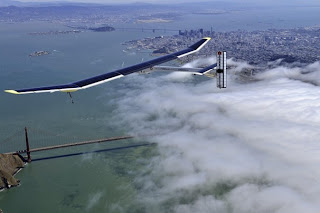 By Michael A. Fletcher,

MOFFETT FEDERAL AIRFIELD, Calif. — The first plane that can fly day and night powered only by the sun on Friday began a transcontinental journey that will reach Washington by mid-June.


Solar Impulse, which lifted off from this World War II-era airfield shortly after 6 a.m. Pacific time, has room for only one person and an average cruising speed of about 43 miles per hour. But its Swiss developers say the technology suggests the possibilities of clean-energy flight.

The plane has an ultra-light carbon-fiber frame that allows it to weigh 3,500 pounds — about the same as a mid-size car. It has the wingspan of a 747 and a slender fuselage, giving it the look of a giant high-tech dragonfly.

The plane’s power is drawn from the sun by 12,000 photovoltaic cells that form the top of its wings. The juice is collected in a series of batteries arrayed behind the craft’s four electric engines. It routinely reaches altitudes of up to 28,000 feet, about a mile below the thin air traversed by big commercial airliners zipping around at close to 500 miles per hour. On-board instruments alert the pilot if the plane banks even a degree too far.

For all of its innovations, at this stage of development, Solar Impulse is no more practical for commercial flight than was the single-engine Spirit of St. Louis that Charles Lindbergh piloted across the Atlantic Ocean in 1927.

The plane’s engines put out about 10 horsepower — roughly the same amount of power as the Wright brothers’ first planes. Solar Impulse cannot take off or land in windy conditions, nor can it fly through clouds. The lone pilot wears a parachute and is confined to an area the size of a “bad economy seat,” noted the project’s chief executive and co-founder Andre Borschberg, 60, an engineer and former fighter pilot.

The tiny cockpit is unheated and unpressurized, meaning the pilot must endure extreme heat and cold and wear an oxygen mask. On long flights, Borschberg practices meditation and advanced breathing techniques to stay energized. His co-founder and the plane’s other pilot,Bertrand Piccard, a psychiatrist, does self-hypnosis.

And as for bodily functions — the pilot relies on spent water bottles and eschews fibrous foods in the days before a flight to make sure that diapers do not have to be pressed into service.

But comfort is not the project’s goal. “The point of this is to underscore how far we’ve come and how far we need to go to develop alternative sources of power, particularly solar energy,” said Bob van der Linden, chairman of the aeronautics department at the Smithsonian National Air and Space Museum. “This will help push the technology along.”

He said there are some possible applications raised by Solar Impulse’s innovations, including high- and long-flying unmanned planes that could be used for mapping purposes. But any broad commercial uses, he said, lie beyond the horizon.

None of this dims the enthusiasm of the project’s founders.

The idea to build the plane started with Piccard, 55, a hang-gliding pioneer, who earned international acclaim in 1999 when he and co-pilot Brian Jones won a competition to fly around the world non-stop in a hot air balloon. Although they won, Piccard was struck that while they started the trip with 8,200 pounds of propane, they had only 88 pounds remaining when the balloon landed.

Posted by Steve Douglass at 8:40 AM No comments:

Kyrgyzstan hosts a U.S. base that is used for flying troops into and out of Afghanistan and for KC-135 tanker planes that refuel warplanes in flight.

The plane crashed Friday afternoon near the village of Chaldovar, about 100 miles (160 kilometers) west of the Manas air base, the ministry said in a statement. It identified the plane as a Boeing 707, but that is a civilian airliner on which the KC-135 tanker is based.

The plane broke into three pieces when it crashed into an uninhabited area, the head of the region that includes Chaldovar, Kuralbek Khamaliyev, told The Associated Press by telephone.

The U.S. base in Kyrgyzstan, called the Transit Center at Manas, said it had no immediate information. The base, which is adjacent to the Manas International Airport outside the Kyrgyz capital of Bishkek, was established in late 2001 to support the international military campaign in Afghanistan.

The base has been the subject of a contentious dispute between the United States and its host nation. In 2009, the U.S. reached an agreement with the Kyrgyz government to use the base in return for $60 million a year.

But the lease runs out in June 2014 and the United States wants to keep the base beyond that point to aid in the withdrawal of troops from Afghanistan.
Posted by Steve Douglass at 6:27 AM No comments: