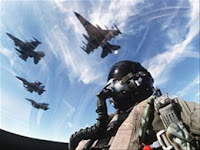 (CNN) -- Two F-16 fighter jets briefly took to the sky over Washington on Monday after a small passenger aircraft violated the capital's airspace restrictions, according to military officials.

A portion of the White House grounds was briefly evacuated during the incident.
The passenger plane -- a Cessna 182 -- was intercepted by the F-16s at 2:19 p.m. EST, a statement from the North American Aerospace Defense Command noted. The plane was escorted to an airport in nearby Manassas, Virginia, where it landed at 2:32 p.m. EST.

The Cessna pilot was a student pilot who initially took off from Warrenton, Virginia, the Federal Aviation Administration confirmed.

The Secret Service will interview the pilot, a spokesman for the agency told CNN.
Posted by Steve Douglass at 2:22 PM No comments:

A powerful Delta 4 rocket roared to life and climbed away from the Cape Canaveral Air Force Station Sunday evening on a high-priority mission to boost a National Reconnaissance Office spy satellite into orbit.

Under a cloudy sky, the hydrogen-fueled engines in the three common core boosters of the United Launch Alliance Delta 4 ignited with a rush of orange fire at 5:58 p.m. EST and quickly throttled up to nearly 2 million pounds of thrust.

Hold-down clamps then released and the huge rocket majestically climbed away from launch complex 37 atop a torrent of fiery exhaust. About 30 seconds later, it knifed into a deck of low clouds and disappeared from view.

Because the NROL-32 payload is classified, United Launch Alliance halted commentary about seven minutes after liftoff, just after the protective nose cone fairing separated and fell away. The vehicle was performing normally at that point, but no other updates were expected.

The payload is believed to be an electronic eavesdropping satellite with a huge collecting antenna. In a September address to the Air Force Association, NRO Director Bruce Carlson said the Delta 4 was carrying "the largest satellite in the world."

"I believe the payload is the fifth in the series of what we call Mentor spacecraft, a.k.a. Advanced Orion," Ted Molczan, a respected satellite tracker, told Spaceflight Now. "They are among the largest satellites ever deployed."

Once on station, the satellite presumably will unfold a huge, lightweight antenna to tap into targeted military or civilian communications networks.

"The satellite likely consists of sensitive radio receivers and an antenna generally believed to span up to 328 feet to gather electronic intelligence for the National Security Agency," Molczan told Spaceflight Now.

Posted by Steve Douglass at 7:06 AM No comments: