Droids for the military ... 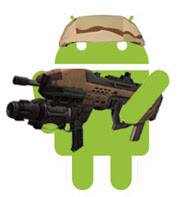 CNN) -- Some U.S. officials this year are expected to get smartphones capable of handling classified government documents over cellular networks, according to people involved in the project.

The phones will run a modified version of Google's Android software, which is being developed as part of an initiative that spans multiple federal agencies and government contractors, these people said.

The smartphones are first being deployed to U.S. soldiers, people familiar with the project said. Later, federal agencies are expected to get phones for sending and receiving government cables while away from their offices, sources said. Eventually, local governments and corporations could give workers phones with similar software.

The Army has been testing touchscreen devices at U.S. bases for nearly two years, said Michael McCarthy, a director for the Army's Brigade Modernization Command, in a phone interview. About 40 phones were sent to fighters overseas a year ago, and the Army plans to ship 50 more phones and 75 tablets to soldiers abroad in March, he said.

"We've had kind of an accelerated approval process," McCarthy said. "This is a hugely significant event."
Currently, the United States doesn't allow government workers or soldiers to use smartphones for sending classified messages because the devices have not met security certifications.

Officials have said they worry that hackers or rogue apps could tap into the commercial version of Android and spill state secrets to foreign governments or to the Web through a publisher such as WikiLeaks. As many as 5 million Android users may have had their phones compromised by a recent virus outbreak rooted in apps found on Google's market, said security software maker Symantec.

But with a secure smartphone, a soldier could see fellow infantry on a digital map, or an official could send an important dispatch from Washington's Metro subway without fear of security breaches.

Developers in the government program have completed a version that has been authorized for storing classified documents but not transmitting them over a cell network, said two people contributing to the initiative. Smartphones cleared for top-secret dispatches -- high-level classified information that would compromise national security if intercepted -- are expected to be ready in the next few months, they said.

Rather than building special handsets hardwired with secure components, the government plans to install its software on commercially available phones, the people familiar with the project said. This approach is far less expensive and allows the government to stay up to date with the latest phones on the market, they said.

Government programmers are making security modifications to Android's kernel, which is the operating system's central component, the people involved said. The version will allow users to choose which data from Android and its applications can be sent over the Internet, they said.

"When you download an application on your phone, you don't really know what it does," Stavrou said. "We test the application in labs before the user consumes that application."

After testing more than 200,000 apps, the researchers discovered that many programs ask for access to far more personal information contained in the phone than they need and, more alarmingly, send some of that superfluous data to the app developers' servers, Stavrou said.

Even some well-intentioned features can compromise national security if left unchecked. For example, a weather app may automatically send a phone's GPS coordinates over the Internet to deliver a local forecast, or games may send the device's unique identifier along with a high score.

On government phones, officials will be prompted with detailed reports about what data may be sent, and they can decline or allow each transmission, the people involved said.

"People want to play 'Angry Birds,' and we do want our people to be able to download 'Angry Birds,' " Stavrou said. But he added, "If a clock application gets your GPS and transmits something over the network, that's not something that we would want to support."

Stavrou, along with seven others at George Mason and the National Institute of Standards and Technology, are developing the smartphone software. They are also consulting with several federal agencies, many within the Department of Defense, he said. He declined to name them.

"The government is actually working pretty hard in getting this technology to most agencies," Stavrou said. "Security is everybody's concern."

READ MORE AT CNN
Posted by Steve Douglass at 7:54 AM No comments: 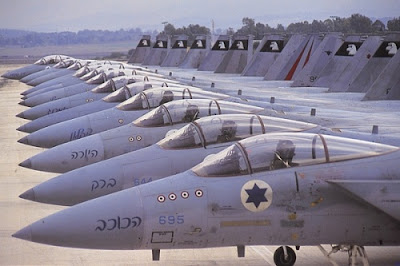 Traveling with the defense secretary in Brussels to cover his meeting with NATO defense ministers, Ignatius writes, "Panetta believes there is a strong likelihood that Israel will strike Iran in April, May or June.”

This is the first time we've heard such a specific timeframe. Fox News has previously reported concerns from former members of President Obama's national security team that a unilateral strike from Israel could occur sometime in 2012 and that Central Command has been planning for the possibility the U.S. could be drawn in.

One former government official who was involved in national security affairs agreed with Panetta's assessment on timing. "I think the likelihood of an attack is high, and the timing seems about right," the former official said, but added that Panetta "may have interrupted and delayed the timing by his disclosure."
Panetta and the administration have made clear in recent weeks that Iran would cross a "red line" by developing a bomb and that if that occurred, all options, including military action, would be on the table.

But Israel is less patient. It appears Israeli officials' red line would be crossed when Iran has the material to build a bomb. In other words, it appears they believe that by this spring Iran will have stockpiled enough highly enriched uranium to produce a nuclear warhead.

By that point, it will be too late for Israel to act alone. Unlike the United States, Israel does not have the capacity to strike Iran's hardened enrichment facilities 200 feet underground. That, along with Iran's arsenal of missiles that can reach Israel, add to Panetta's concerns that Israel is preparing to strike as early as this spring.

There are essentially two obvious methods for striking the underground facility that could be used. The first involves the Pentagon’s newly developed Massive Ordnance Penetrator, known simply as the MOP. The largest of its kind, it's a 30,000 pound bunker-busting bomb designed to hit underground targets. Yet in a recent interview with the Wall Street Journal, Panetta acknowledged the MOP has some shortcomings and needs further development to reach areas as deeply buried as Iran's nuclear facilities.

Since the MOP is the largest conventional weapon in the U.S. arsenal, the second option could involve using smaller-scale nuclear weapons. It's not likely a card the Obama administration would play, one that would make him the first president since Harry Truman to drop a nuclear bomb.

Another clue about Israel's intent was the sudden cancellation of long-planned joint U.S.-Israeli military exercises that would have culminated in live-fire drills this May. The Israelis apologized for postponing the exercises, and a Pentagon spokesmen said at the time of the cancellation the Israelis explained they needed to postpone in order to "assume optimum participation," suggesting their forces could be needed elsewhere.


Read HERE
Posted by Steve Douglass at 7:39 AM No comments: