US warns Iran it would be "crossing the red line" if strait are closed. 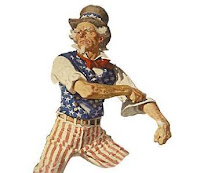 The U.S. has warned Iran's Supreme Leader Ayatollah Ali Khamenei through a secret channel of communication that closing the Strait of Hormuz would elicit an American military response, a report says.

United States government officials would not describe how the message was relayed, and whether Iranian leaders responded, the New York Times reports.


But Obama administration officials have warned Iran that shutting down the Strait of Hormuz — a vital waterway that carries one-sixth of the world's oil supply — would cross a "red line."

The chairman of the Joint Chiefs of Staff, Gen. Martin E. Dempsey, said recently that if Iran made good on its closure threats, the U.S. would "take action and reopen the strait," which could be accomplished only by military means, including minesweepers, warship escorts and potentially airstrikes, the Times reports.
Posted by Steve Douglass at 6:05 AM No comments: