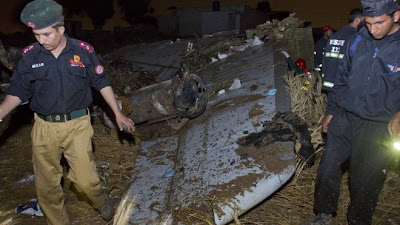 Rescue crews have recovered at least 118 bodies. Emergency workers used flashlights to search among the smoldering wreckage of the fuselage, smashed seats and body parts for any sign of life at the crash site.
The Bhoja Airlines flight was a commercial jet traveling to Islamabad from Karchi.

The Boeing 737 was expected to land in Islamabad at 6:40 p.m. local time, but crashed shortly before, sources say.
The plane crashed in the residential area of Rawalpindi, which was reportedly experiencing heavy rain at the time.
"It was really bad weather for a flight," said Navy captain Arshad Mahmood, who lives near the crash site. "The pilot was forced to move down to avoid clouds that were generating the lightening and thunder."
Eleven of the 127 people on board were members of the flight crew.
Sobbing relatives of those on the flight flocked to the airport.

"My brother's wife was on board this flight," said Naveed Khan, who was among family members who gathered at Karachi's airport. "We pray for the departed souls, what else can we do now?"
Bhoja Air, a domestic carrier that has just four planes, only resumed operations last month after suspending them in 2001 due to financial difficulties. It was the airline's first evening flight from Karachi, according to a Bhoja Air official.
Wreckage, including smashed seats, clothes and jewelry belonging to passengers, was spread out over a half-mile wide area.

"I saw nothing but body parts and twisted metal on the ground when reached the scene," said local resident Mustafa, who only gave one name. "We collected up small pieces of human flesh and bundled them in cloth sheets like we collect grain."

Islamabad police chief Bani Yameen said that nobody on the ground appeared to be killed, "but apparently all onboard perished."

Several farmers threshing wheat in the field near the crash said they saw the craft burst into flames when it hit the ground.

"The flames leapt up like they were touching the sky," said Mohammad Zubair.
The army declared an emergency and cordoned off the crash site.

TV footage showed wreckage of the plane, including parts of what looked like its engine and wing, up against the wall of a small building. Rescue officials were working in the dark, with many using flashlights as they combed the area.
The last major plane crash in the country -- and Pakistan's worst ever -- occurred in July 2010 when an Airbus A321 aircraft operated by Airblue crashed in the hills overlooking Islamabad, killing all 152 people on board.

A government investigation blamed the pilot for veering off course amid stormy weather. The impact of the crash was devastating, scorching a wide swath of the hillside and scattering wreckage over a kilometer (half-mile) stretch. Most bodies were so badly damaged that identification required DNA testing.

Bhoja Air started domestic operations in Pakistan in 1993 and eventually expanded to international flights to the United Arab Emirates in 1998. The company suspended operations in 2001 due to financial difficulties but resumed them in 2012.

In a statement, the Boeing Co. extended its condolences to the families of the victims and offered technical assistance to Pakistan's Civil Aviation Authority.
The Associated Press contributed to this report.
Read more: http://www.foxnews.com/world/2012/04/20/pakistani-civilian-airplane-crashes-with-127-onboard/?test=latestnews#ixzz1scFsrDH5
Posted by Steve Douglass at 1:53 PM No comments:

Anybody want to buy a stealth boat? 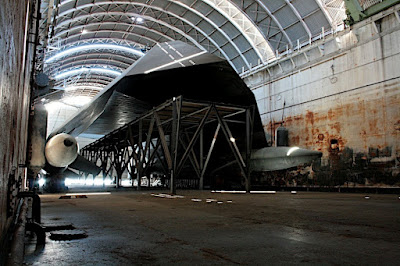 The Sea Shadow - the first stealth naval warship is for sale. Problem is - you can't sail her. Anyone who wins the bid has to promise to scrap it and the secret floating dock it was housed in. LINK

Sea Shadow was built in 1984 and used in secret but normal service until her public debut in 1993, to examine the application of stealth technology on naval vessels. In addition, the ship was designed to test the use of automation to enable the reduction of crew size.

The ship was created by the Defense Advanced Research Projects Agency (DARPA), the U.S. Navy and Lockheed. Sea Shadow was developed at Lockheed's Redwood City, California, facility, inside the Hughes Mining Barge (HMB-1), which functioned as a floating drydock during construction and testing.[1] She is sometimes referred to as "USS Sea Shadow"; however, this designation is inappropriate as she was never a fully commissioned ship of the U.S. Navy. Sea Shadow has a SWATH hull design. Below the water are submerged twin hulls, each with a propeller, aft stabilizer, and inboard hydrofoil. The portion of the ship above water is connected to the hulls via the two angled struts.

The SWATH design helps the ship remain stable even in very rough water of up to sea state 6 (wave height of 18 feet (5.5 m) or "very rough" sea). The shape of the superstructure has sometimes been compared to the casemate of the ironclad ram CSS Virginia of the American Civil War.[1] The T-AGOS 19-and-23-class oceanographic ships have inherited the stabilizer and canard method to help perform their stability-sensitive surveillance missions.[1] Sea Shadow has only 12 bunks aboard, one small microwave oven, a refrigerator and table.

It was never intended to be mission capable and was never commissioned, although she is listed in the Naval Vessel Register. Sea Shadow was revealed to the public in 1993, and was housed at the San Diego Naval Station until September 2006, when it was relocated with the Hughes Mining Barge - inside which it still resides - to the Suisun Bay Reserve Fleet in Benicia, CA.

The vessels are available for donation to a maritime museum.[1] Sea Shadow was also the inspiration for the stealth ship in the James Bond film Tomorrow Never Dies. Since 2006 the U.S Navy has tried to sell the Sea Shadow to the highest bidder but as of February 2009 nobody has bid.

Not having found any viable offer to take in the Sea Shadow by June 18, 2011, the Navy finally decided to set it for "dismantling and recycling".[3] As of June 2011 the Sea Shadow is still being stored inside its barge at Suisun Bay awaiting its fate.[4] As of April 2012 Sea Shadow is listed for dismantling sale on gsaauctions.gov.
Posted by Steve Douglass at 12:54 PM No comments: 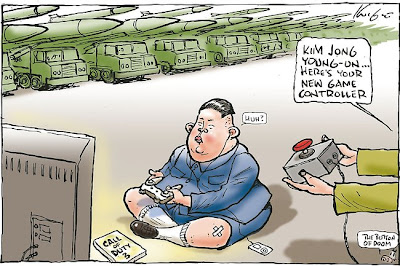 Seoul claims North Korea is assembling another heavy ballistic missile similar to the ill-fated one launched on April 13. Seoul’s assumptions are based on American space reconnaissance data. They say both rockets were delivered at the site simultaneously around March 23. One rocket was unsuccessfully launched last week, falling to pieces less than two minutes after the launch. The second rocket, presumably of the same type and specifications, is being prepared for launch in a hangar at at the Tongch'ang-dong Space Launch Center in woodland some 50 kilometers from the border with China. Seoul believes Pyongyang wants to compensate for the unfortunate launch of the Unha-3 that was supposed to take first North Korean satellite into an orbit. The UN Security Council banned North Korea to launch any ballistic missiles of both military and space research scientific missions after Pyongyang made two attempts to test ballistic missiles in 2006 and 2009. Despite the prohibition, North Korea will continue to develop its military might, promised country’s new leader Kim Jong-un. “National military industrial complex must develop a growing number of advanced weapons of the highest quality,” stressed the North Korean leader in his first statement since coming to power last year. After a successful test of a nuclear warhead in 2006 North Korea secured a role of an international pariah, falling under numerous UN-imposed sanctions. This explains why the reaction of the international community on North
Posted by Steve Douglass at 12:28 PM No comments: 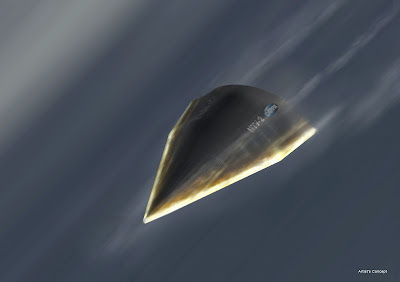 DARPA: April 20, 2012 Aerodynamic design validated and new understanding of thermal material properties gained Following an extensive seven-month analysis of data collected from the Aug. 11, 2011, second flight of DARPA’s Hypersonic Technology Vehicle (HTV-2), an independent engineering review board (ERB) investigating the cause of a flight anomaly completed its report. The findings of the ERB validated the vehicle’s aerodynamic design and uncovered new information regarding the thermal material properties of the vehicle. “The greatest achievement from Flight Two, which the ERB’s findings underscored, was that we successfully incorporated aerodynamic knowledge gained from the first flight into the second flight,” said Air Force Maj. Chris Schulz, DARPA program manager, who holds a doctorate in aerospace engineering. A technology demonstration and data-gathering platform, the HTV-2’s second test flight was conducted to validate current models and increase technical understanding of the hypersonic regime. The flight successfully demonstrated stable aerodynamically-controlled flight at speeds up to Mach 20 (twenty times the speed of sound) for nearly three minutes. Approximately nine minutes into the test flight, the vehicle experienced a series of shocks culminating in an anomaly, which prompted the autonomous flight safety system to use the vehicle’s aerodynamic systems to make a controlled descent and splashdown into the ocean. “The initial shockwave disturbances experienced during second flight, from which the vehicle was able to recover and continue controlled flight, exceeded by more than 100 times what the vehicle was designed to withstand,” said DARPA Acting Director, Kaigham J. Gabriel. “That’s a major validation that we’re advancing our understanding of aerodynamic control for hypersonic flight.” The ERB concluded that the “most probable cause of the HTV-2 Flight 2 premature flight termination was unexpected aeroshell degradation, creating multiple upsets of increasing severity that ultimately activated the Flight Safety System.” Based on state-of-the-art models, ground testing of high-temperature materials and understanding of thermal effects in other more well-known flight regimes, a gradual wearing away of the vehicle’s skin as it reached stress tolerance limits was expected. However, larger than anticipated portions of the vehicle’s skin peeled from the aerostructure. The resulting gaps created strong, impulsive shock waves around the vehicle as it travelled nearly 13,000 miles per hour, causing the vehicle to roll abruptly. Based on knowledge gained from the first flight in 2010 and incorporated into the second flight, the vehicle’s aerodynamic stability allowed it to right itself successfully after several shockwave-induced rolls. Eventually, however, the severity of the continued disturbances finally exceeded the vehicle’s ability to recover. According to Schulz, “HTV-2’s first flight test corrected our models regarding aerodynamic design within this flight regime. We applied that data in flight test two, which ultimately led to stable aerodynamically controlled flight. Data collected during the second test flight revealed new knowledge about thermal-protective material properties and uncertainties for Mach 20 flight inside the atmosphere, which can now be used to adjust our assumptions based on actual flight data and modify our modeling and simulation to better characterize thermal uncertainties and determine how to assess integrated thermal systems.” Aerodynamic assumptions and extrapolations from known flight regimes proved inadequate when preparing for HTV-2 inaugural flight test. The data from second flight revealed that extrapolating from known flight regimes and relying solely on advanced thermal modeling and ground testing could not successfully predict the harsh realities of Mach 20 atmospheric flight. “A group of nationally-recognized experts from government and academia came together to analyze the flight data and conduct extensive additional modeling and ground testing for this review,” Schulz said. “The result of these findings is a profound advancement in understanding the areas we need to focus on to advance aerothermal structures for future hypersonic vehicles. Only actual flight data could have revealed this to us.” Moving forward, the HTV-2 program will incorporate new knowledge gained to improve models for characterizing thermal uncertainties and heat-stress allowances for the vehicle’s outer shell. The remediation phase will involve further analysis and ground testing using flight data to validate new tools for this flight regime. The ERB findings and remediation phase efforts will inform policy, acquisition and operational decisions for future Conventional Prompt Global Strike initiatives executed by the Office of the Secretary of Defense, Acquisition, Technology & Logistics, Strategic Warfare directorate—the goal of which, ultimately, is to have the capability to reach anywhere in the world in less than one hour.
Posted by Steve Douglass at 12:15 PM No comments: