Editor's Note: Click to enlarge the photo. It almost looks as if the rocket's nose-cone has separated shortly after lift-off.
Your comments are welcome. 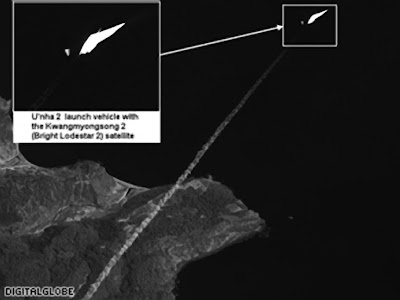 The group says the images were captured by a satellite on Sunday.

The communist nation launched the rocket last weekend in defiance of international opposition.

The Washington-based Institute for Science and International Security said it obtained the images from a DigitalGlobe satellite and that they were taken Sunday in North Korea.

In one image, the missile's exhaust plume can be seen. The flame from the burning propellant appears as a solid white mark.

The terrain below the rocket in a second image is only a few kilometers away from the launch pad, the institute said.

The third image is a close-up of the flame from the rocket's burning propellant, the institute, led by former U.N. nuclear inspector David Albright, said.

The United States and other nations say the move demonstrated the country's ability to shoot a long-range missile -- a rocket with a warhead attached -- and violated U.N. Security Council resolutions.
Posted by Steve Douglass at 6:54 AM No comments: