RQ-170 crashed due to technical glitch - but Iran still - blah-blah-BSing.

The war of words between Iran and the U.S. over the RQ-170 Sentinel continues. On Tuesday U.S. House Intelligence Committee Chairman Mike Rogers denied Iran’s claim that it had shot down the UAV.

“I will say without hesitation that this is not something that anyone had anything to do with coming down with, other than a technical problem,” said Rogers. “There was a technical problem that was our problem, nobody else’s problem. I think there’s a lot of PR (public relations) going on.”
“These things are not infallible,” he added.

Meanwhile, Iran says it will reverse-engineer the UAV.

“Our next action will be to reverse-engineer the aircraft,” Parviz Sorouri, head of Iran’s parliamentary national security committee said. “In the near future, we will be able to mass produce it…. Iranian engineers will soon build an aircraft superior to the American (UAV) using reverse-engineering.”

U.S. officials are skeptical that Iran will be able to reverse-engineer the UAV itself but are concerned that might be done with the help of Russia or China.

But Sorouri said Iran is “in the final stages of cracking (the UAV’s) code.”

“We will acquire valuable intelligence through deciphering the Americans’ covert intelligence and espionage methods once the code is cracked,” he added.
Posted by Steve Douglass at 1:58 PM No comments: 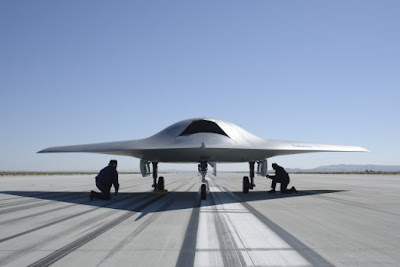 Kansas - Residents in Cowley County are still talking about a mystery craft, seen being towed down US 77 Monday.

Sitting inside Lindly's Appliance Store, Kammi Root is used to seeing large machinery towed down US 77. But what she saw Monday afternoon is something she won't soon forget.

“There was this funny sphere that went through on this big trailer and my first thought was, 'That looks like a UFO,’” said Root.

A huge 32 foot craft, wrapped in tarp, was as mysterious as the transport company who called Sheriff Don Read for help.

“They told us that it was an aircraft and that they had explored other ways to transport it but this was the best way for them to do it and they asked us not to say a whole lot about it,” said Read.

After all, the massive load's shape would certainly draw enough attention on its own.

“People were calling in saying, 'Oh they think they found a flying saucer. It looks like a flying saucer to us and we don't know for sure what it is,’” said Donetta Godsey with the Winfield Daily Courier.

For nearly an hour, officers helped maneuver the craft through Cowley County.

”The biggest thing that we had to deal with was down at the roundabout we had to remove a bunch of signs and markers because the load was so long it couldn't make the corner,” said Read.

Meanwhile, onlookers struggled to wipe the shock from their faces and the questions from their minds.

”What was that funny thing that was on that trailer that looked like something from somewhere else?” said Root.

So what in the world was it? Undersheriff Bill Mueller says it was an experimental aircraft from Northrop Grumman, possibly a new unmanned drone. It still has a ways to go. Its final destination is Maryland.

UPDATE: The unusual object traveling through Cowley County, which was the cause of much conversation Monday morning, was a U.S. Navy drone.

Hauled on a large flatbed truck along U.S. 77, area residents got a look at a 32-foot-wide, dull gray, wrapped apparatus shaped like a flying saucer and featuring flashing red lights.

Reports were that the object is a Navy drone, which — after wings are attached — will fly from aircraft carriers. Most likely it's an X-47B. See comparison photo. It's not a UFO - so calm down True Beleivers.

One clearance location of concern was the bridge north of Winfield, which only is 35 feet wide.

Local emergency management officers, along with members of the Arkansas City and Winfield police departments and Cowley County Sheriff's Department, were on hand to control traffic as the aircraft was transported through Cowley County to Maryland. 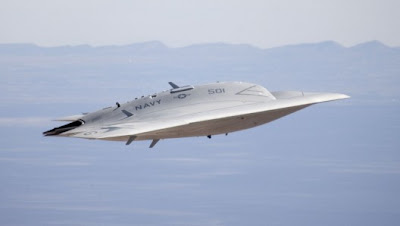 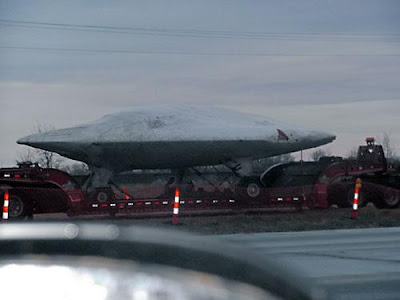 Posted by Steve Douglass at 8:43 AM No comments: