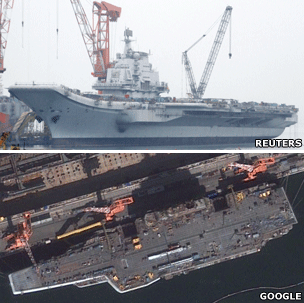 The head of China's General Staff of the People's Liberation Army (PLA) has confirmed that China's first aircraft carrier is under construction.

Gen Chen Bingde refused to say when the carrier - a remodelled Soviet-era vessel, the Varyag - would be ready.

A member of his staff said the carrier would pose no threat to other nations.

The 300m (990ft) carrier, which is being built in the north-east port of Dalian, has been one of China's worst-kept secrets, analysts say.

Gen Chen made his comments to the Chinese-language Hong Kong Commercial Daily newspaper.

Symbol of power
The PLA - the largest army in the world - is hugely secretive about its defence programme.

The carrier was constructed in the 1980s for the Soviet navy but was never completed. When the Soviet Union collapsed, the rusting hull of the Varyag sat in dockyards in Ukraine.

The giant, grey hulk of China's newest warship, 60,000 tonnes of steel, sits at a dockside in the port of Dalian, almost ready to set sail”

Read Damian Grammaticas' report from Dalian
A Chinese company with links to the PLA bought the Varyag claiming it wanted to turn it into a floating casino in Macau.

The carrier is thought to be nearly finished, and is expected to begin sea trials later this year.

But the BBC's Michael Bristow in Beijing says that does not mean it will then be ready to undertake operational duties.

Learning how to operate it - and fly planes off it - will take a few more years to master, our correspondent says.

Lt Gen Qi Jianguo, assistant chief of the general staff, told the Hong Kong Commercial Daily that even after the aircraft carrier was deployed, it would "definitely not sail to other countries' territorial waters".

"All of the great nations in the world own aircraft carriers - they are symbols of a great nation," he was quoted as saying.

Read the rest of the story HERE.
Posted by Steve Douglass at 7:40 AM No comments:

bin Laden's number two - wants to be number one. 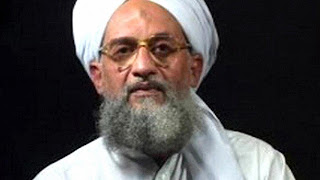 ABC NEWS: Appearing to assume the role as the new leader of al Qaeda, the former number two Ayman al-Zawahiri vowed to avenge the death of Osama bin Laden "blood for blood," in a video posted on the internet Wednesday morning.

The 28-minute video is the first statement from the 59-year-old al-Zawahiri, an Egyptian doctor, to acknowledge the death of bin Laden, killed in a U.S. Navy SEAL raid into Pakistan last month. Looking aged, and at times angry, al-Zawahiri used a chopping motion with his hands and urged his followers to remember the 9/11 attacks against American and made a point to recall the deaths of US military personnel at the Pentagon.

Al-Zawahiri did not specifically mention whether he was now the leader of the terror group's global jihad, but his tone and words suggested he had the legitimacy to succeed bin Laden.


His anger was apparent as he criticized the U.S. for the manner in which bin Laden was reportedly buried at sea from a U.S. Navy aircraft carrier. He called it not Islamic, but "the Islam of the United States, the Islam of Obama."

Elsewhere in the message, in which al-Zawahiri appeared with an automatic rifle to his side, he urged the youth of Pakistan to follow the led of the youth of Egypt, Tunisia, Libya and Syria seek to overthrow the government.

Al-Zawahiri, founder of the Egyptian extremist group Egyptian Islamic Jihad, also helped found al Qaeda with bin Laden. He sports the largest bounty offered for information on any terrorist by the U.S. government -- $25 million -- and is wanted for his role in the 1998 bombings of the U.S. embassies in Tanzania and Kenya, which claimed 224 lives.
Posted by Steve Douglass at 6:04 AM No comments: