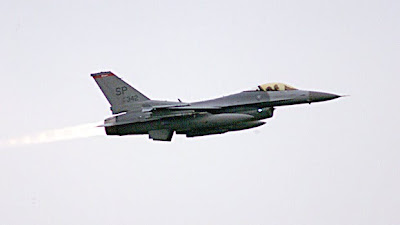 In all, the U.S. Navy has five combat ships in the Mediterranean, including at least one guided-missile destroyer, but there are no U.S. aircraft carriers close to Libya.

The USS Enterprise, which recently was stationed in the Red Sea, has been moved eastwards, away from Libya, to join the USS Carl Vinson, in the Arabian Sea to support Afghanistan operations.

—Witnesses reported five F-18s, two C-17s and a C-130 cargo plane arrived at U.S. air base at Aviano in northern Italy, which is home to the 31st Fighter Wing.

Aviano, south of the Alps in Italy, is the region's only U.S. air base with aircraft assigned to it -- 42 F-16s. The Pentagon has not discussed the positioning of other planes in the region. The United States has a range of Mediterranean military bases and installations in Italy, Greece, Spain and Turkey.

Canadian fighter jets have reached the region but need another day or two of preparation before they can join the mission, a Canadian government spokesman said.

Italy has deployed dozens of combat aircraft at its base at Trapani, in western Sicily in readiness for possible involvement in airstrikes on Libya.

Tornado fighters that can be used to destroy enemy air defenses and radar as well as F-16s and Eurofighters used for air-to-air defense have been moved to Trapani from bases in Piacenza in northern Italy, Gioia del Colle in Apulia.

Italy has offered the use of a NATO base near Naples for joint command center for the joint operation, and could participate later on in military activities, Prime Minister Silvio Berlusconi said.

Defense Minister Ignazio La Russa said in all seven bases in Italy -- at Amendola, Gioia del Colle, Sigonella, Aviano, Trapani, Decimomannu and Pantelleria -- were available and some allies had asked to use them.

Five are on the southern mainland or Sicily, making them some of the closest available bases to Libya.

—Six F-16s arrived at U.S. air base in Sigonella, Sicily and could be deployed as early as Sunday; 132 support staff.

—Said it would send Typhoon and Tornado jets to air bases, but no British fighter assets have yet been forward deployed, the Ministry of Defense said.

Tornadoes took off from RAF Marham in Norfolk shortly after a barrage of 112 Tomahawk cruise missiles - some of them British - was fired at Libya to knock out the dictator's air defence systems at more than 20 coastal locations.

—Britain's air base in southern Cyprus, RAF Akrotiri, supporting AWACS surveillance aircraft and has a team of personnel there to coordinate British aircraft movement.
—Two British frigates, HMS Westminster and HMS Cumberland, are in the Mediterranean off Libya's coast. 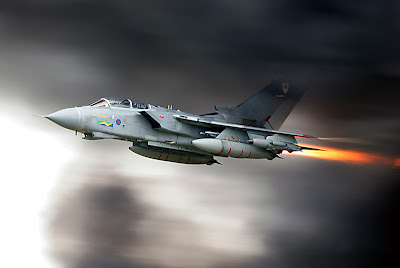 RAF jets join international action
(UKPA) – 1 hour ago
At least three RAF Tornado jets set off from the UK on Saturday night to take part in the operation to enforce a no-fly zone over Libya as the international community swung into action against Muammar Gaddafi.


The flights took off from RAF Marham in Norfolk shortly after a barrage of 112 Tomahawk cruise missiles - some of them British - was fired at Libya to knock out the dictator's air defence systems at more than 20 coastal locations.


A Royal Navy Trafalgar-class submarine stationed in the Mediterranean took part in the co-ordinated assault, which also involved forces from the US, France, Italy and Canada under the operational control of US Africa Command.


The missiles targeted radar systems and ground-to-air missile sites around the cities of Tripoli and Misrata in what was described as "the first phase of a multi-phase operation", clearing the way for allied planes to take control of the skies.


The onslaught on Gaddafi came after an emergency summit in Paris agreed military action to enforce United Nations resolution 1973, which authorised "any necessary measures" short of foreign occupation to defend Libyan civilians.


Around 20 French Mirage and Rafale fighter jets were immediately sent into action over the rebel stronghold of Benghazi, firing the first shots of the operation to destroy a number of Gaddafi's tanks and armoured vehicles.


Benghazi had come under fierce attack during the day, despite a supposed ceasefire, raising fears that Gaddafi would take advantage of delays in the international response to smash the opposition and commit atrocities against those who rose up against his 42-year rule a month ago.
Prime Minister David Cameron announced that British forces had gone into action in a brief statement outside 10 Downing Street following a meeting of senior ministers and military top brass in the Government's Cobra emergency committee.


As he initiated his first military campaign as PM, Mr Cameron described the operation as "necessary, legal and right". His thoughts were with British service personnel who were risking their lives to save others, he said.

President Barack Obama, making a visit to Brazil, said the US would contribute its "unique capabilities" to enable the enforcement of a no-fly zone which will be led by its international partners. Repeating his pledge that no US ground troops will be sent to Libya, Mr Obama said the "limited" use of force was "not an outcome the US or any of our partners sought". But he added: "We can't stand idly by when a tyrant tells his people that there will be no mercy."
Posted by Steve Douglass at 7:10 PM No comments: 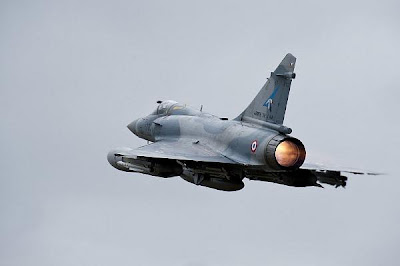 The UK, US and France have attacked Libyan leader Col Muammar Gaddafi's forces in the first action to enforce a UN-mandated no-fly zone.

Pentagon officials say the US and the UK have fired more than 110 missiles, while French planes struck pro-Gaddafi forces attacking rebel-held Benghazi.

Col Gaddafi has vowed retaliation and said he will open arms depots to the people to defend Libya.

A French plane fired the first shots against Libyan government targets at 1645 GMT, destroying a number of military vehicles, according to a military spokesman.

Despite the fact that it was French war planes which launched the first attacks, it's clear that this early phase of the operations is an overwhelmingly American affair - all but a very small number of cruise missiles have been fired from American ships and submarines.

Only they have the capability to inflict the sort of damage to Libya's air defences that's needed before a no-fly zone can be safely patrolled, a point alluded to by President Obama even as he repeated the limits of American involvement.

President Obama has launched these attacks with great reluctance and seems anxious that this not be interpreted as yet another American-led foray into the Arab world.

But for all his desire to be seen to take a back seat, he and everyone else knows that this sort of thing doesn't happen unless Washington is deeply involved.

US President Barack Obama, speaking during a visit to Brazil, said the US was taking "limited military action" as part of a "broad coalition".

"We cannot stand idly by when a tyrant tells his people there will be no mercy," he said.

He repeated that no US ground troops would take part.

After the missile bombardment and the air strikes, Col Gaddafi made a brief speech calling on people to resist.

"Civilian and military targets in the air and sea will be liable to serious danger in the Mediterranean," he said.

"Arms depots are now open and the masses are being equipped with all sorts of weapons in defence of Libya's independence, unity and honour," the Libyan leader warned.

'Necessary'
A British submarine has fired a number of missiles at Libyan air defence targets, the Ministry of Defence said.

Libyan state TV reported that what it called the "crusader enemy" had bombed civilian areas of Tripoli, as well as fuel storage tanks supplying the western city of Misrata.

Sources in Tripoli told BBC Arabic that the attacks on the city had so far targeted the eastern areas of Sawani, Airport Road, and Ghasheer. These are all areas believed to host military bases.

After midnight on Sunday, heavy bursts of anti-aircraft fire arced into the sky above Tripoli and several explosions were heard.

The cruise missiles were fired from one British submarine and a number of American destroyers and subs, said a Pentagon official.

The action came hours after Western and Arab leaders met in Paris to agree how to enforce the UN resolution, which allows "all necessary measures" to protect civilians from forces loyal to Col Gaddafi.

Reports from the city said that government tanks and artillery had bombarded the city and there was fighting around the university.

Obama: "We cannot stand idly by when a tyrant tells his people there will be no mercy"
Rebels in the city said thousands of people were fleeing the attack, heading east, and the UN refugee agency said it was preparing to receive 200,000 refugees from Libya.

Journalists later said the bombardment ended in the later afternoon and that rebel forces were in control of Benghazi.

The Libyan government blamed the rebels for breaking the ceasefire and said its forces had fought back in self defence.

French planes are reported to have hit government tanks and armoured vehicles around Benghazi.

In addition, Canada is sending warplanes to the region, while Italy has offered the use of its military bases. A naval blockade against Libya is also being put in place.

"In Libya, the civilian population, which is demanding nothing more than the right to choose their own destiny, is in mortal danger," he warned. "It is our duty to respond to their anguished appeal."

Shortly after the airstrikes began, Libyan state TV said a French plane had been shot down near Tripoli. However, French military officials said all their planes had returned safely.

Col Gaddafi has ruled Libya for more than 40 years. An uprising against him began last month after long-time leaders of neighbouring Tunisia and Egypt were toppled. 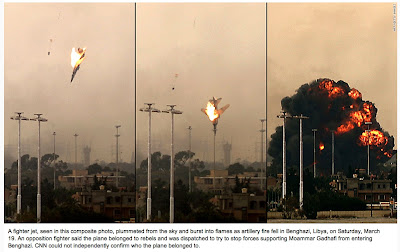 Posted by Steve Douglass at 2:07 PM No comments: