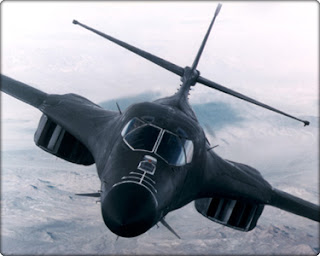 FB: NATIONAL SECURITY: Despite reports that are beginning to circulate on the Internet, the U.S. is not sending B-1 Lancer heavy bombers to its massive Pacific Ocean base on Guam.

"They're not at Guam," a U.S. Pacific Air Forces spokeswoman just told Killer Apps. "They definitely didn't even stop through."

The U.S. constantly rotates B-2 stealth bombers and B-52 Stratofortress bombers through Anderson Air Force Base, Guam under a scheme meant to maintain a constant heavy bomber presence in the Pacific. Last week, the U.S. sent six B-52s from Minot AFB in North Dakota to Guam.  Also last week, a pair of B-2s also flew a 13,000-mile round-trip mission from Missouri to South Korea to perform a practice bombing run over the peninsula -- the North Koreans loved that.

B-1s, however, often deploy to Diego Garcia in the Indian Ocean or to a base on the Persian Gulf, where they are used to provide air support to troops in Afghanistan.
"They're pretty concerned with the desert, so they're pretty busy over there," added the spokeswoman when asked if the B-1s ever deploy to Anderson as part of the Air Force's "continuous bomber presence" mission.

Editors note: A source at Dyess has notified this author that two of the fight of seven (spares) B-1Bs I monitored a couple of nights ago have returned to the base. The others have not. He could not tell me where the five eventually landed at. In the statement above "not sending" is ambiguous at best. Maybe it should have been re-worded as "didn't send or hasn't sent." - Steve Douglass