Is this the prototype for the stealth helicopter that was used in the bin Laden raid? 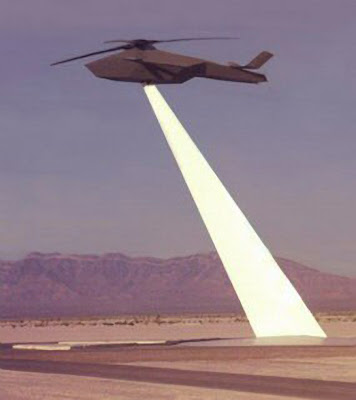 Recently I was sent a photo of a pole-model of a "stealth helicopter" being tested at a radar cross section facility known as RATSCAT/RAMS located in the White Sands Missile Range in New Mexico.

Could this be a prototypical test-shape that lead to the "stealth blackhawk" used in the bin Laden raid or is it something else in the works or (maybe) a vintage photo of an early low RCS helicopter UAV concept?

Unlike the tail section left behind in the bin Laden raid - this one looks more like a NOTAR design. However, it's an educated guess the radar data collected from this model may have lead to the design of the Stealth Blackhawk.

Hi Steve & folks,
That picture shows a RCS modell for the Unmanned Combat Armed Rotorcraft (UCAR) program. It seems to be from Lockheed Martin.
The program was cut abruptly in late 2004.

IMHO, maybe it became a black program and some parts like the rotor might used for the "MH-60? Silent Hawk" ;) !

(Reuters) - American militants like Anwar al-Awlaki are placed on a kill or capture list by a secretive panel of senior government officials, which then informs the president of its decisions, according to officials.

There is no public record of the operations or decisions of the panel, which is a subset of the White House's National Security Council, several current and former officials said. Neither is there any law establishing its existence or setting out the rules by which it is supposed to operate.

The panel was behind the decision to add Awlaki, a U.S.-born militant preacher with alleged al Qaeda connections, to the target list. He was killed by a CIA drone strike in Yemen late last month.

The role of the president in ordering or ratifying a decision to target a citizen is fuzzy. White House spokesman Tommy Vietor declined to discuss anything about the process.

Current and former officials said that to the best of their knowledge, Awlaki, who the White House said was a key figure in al Qaeda in the Arabian Peninsula, al Qaeda's Yemen-based affiliate, had been the only American put on a government list targeting people for capture or death due to their alleged involvement with militants.

The White House is portraying the killing of Awlaki as a demonstration of President Barack Obama's toughness toward militants who threaten the United States. But the process that led to Awlaki's killing has drawn fierce criticism from both the political left and right.

In an ironic turn, Obama, who ran for president denouncing predecessor George W. Bush's expansive use of executive power in his "war on terrorism," is being attacked in some quarters for using similar tactics. They include secret legal justifications and undisclosed intelligence assessments.

Liberals criticized the drone attack on an American citizen as extra-judicial murder.

Conservatives criticized Obama for refusing to release a Justice Department legal opinion that reportedly justified killing Awlaki. They accuse Obama of hypocrisy, noting his administration insisted on publishing Bush-era administration legal memos justifying the use of interrogation techniques many equate with torture, but refused to make public its rationale for killing a citizen without due process.

Some details about how the administration went about targeting Awlaki emerged on Tuesday when the top Democrat on the House Intelligence Committee, Representative Dutch Ruppersberger, was asked by reporters about the killing.

READ THE REST OF THE STORY HERE
Posted by Steve Douglass at 5:48 AM No comments: