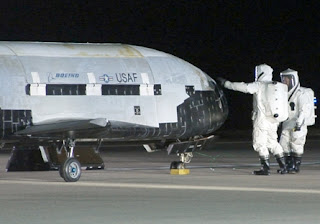 '
FLIGHTGLOBAL: US Air Force Space Command is preparing to receive the Boeing X-37B when it descends from a year-long orbit as early as this weekend to land at Vandenberg AFB, California.

"While the exact landing date and time will depend on technical and weather considerations, it is expected to occur during the early- to mid-June timeframe," says USAF.

The spacecraft will remain at Vandenberg for post-flight checks and refurbishment. "The next flight (re-flight of OTV-1) is on track for this fall, but the exact date is still awaiting wing level approval as part of the normal scheduling process," says Spacecom.

While its mission remains classified, Spacecom officials have publically praised the spacecraft's performance in orbit. The spacecraft itself is considered experimental, hence the X-designation. The craft has a payload bay carrying classified equipment, which has been the subject of feverish speculation. The project was originally run by NASA, but it was cut for budgetary reasons. Soon afterwards the project was reactivated by the Defense Advanced Research Projects Agency (DARPA), and turned over to the USAF.
Posted by Steve Douglass at 7:17 AM No comments:

Top Gun for a day in Vegas.

HENDERSON, Nevada –  Just about everyone wants to be Maverick (aka Tom Cruise) from "Top Gun", right?  Who can resist the cool flight suit, the aviator sunglasses --and let's not forget the flying.

Sky Combat Ace in Henderson, Nev. let's you pretend you're a fighter pilot high above desert --and you better buckle up because you're about to have the flight of your life!

"Well, I call it the most extreme thrill ride you can do in Las Vegas," said Richard "Tex" Coe, president of  Sky Combat Ace.
His company lets thrill seekers jump into the cockpit of of a one-of-a-kind fighter plane and fly around the mountainous terrain of the Silver State. And if you're up for it, the pilot will let you take control of the plane to perform hammerheads, tailslides, and aerial loops.

"What you're flying is these world class Extra 330s," said Coe. "They are the world's most advanced FAA certified aircrafts."
Packages range from $200 up to around $1,300, with flights going as long as 45 minutes.

No experience is needed either since a highly-trained fighter pilot takes you through a quick briefing before hopping in the plane. After the training session, your equipped with a flight suit and a badge with a nickname of your choice. Once you're in the cockpit, a pilot joins you in the plane and is there to guide you on your aerial journey.
There are a range of packages from the blood-pumping  Top Gun and Adrenaline Rush packages, to the more sedate, site seeing tours over the Hoover Dam and Red Rock Mountains.

"The main thing is to relax and have fun," said Coe. "These are the safest aerobatic aircrafts in the world."
Sky Combat Ace is relatively close to the Las Vegas strip, so here's an important piece of advice before you make that trip.
"I would not recommend a Las Vegas buffet and I would not recommend a three-alarm hangover either," said Coe.
Read more: http://www.foxnews.com/travel/2012/05/30/fighter-pilot-for-day/#ixzz1wYCWSwTy
Posted by Steve Douglass at 7:11 AM No comments: