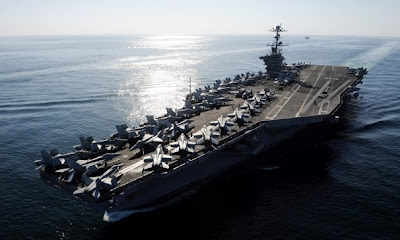 Iran's parliament said Wednesday it was preparing a bill that would prohibit all foreign warships from entering the Persian Gulf unless they received permission from the Iranian navy.

The bill, disclosed by the the semiofficial Fars News Agency, surfaced a day after Iran’s armed forces commander warned a U.S. nuclear-powered aircraft carrier not to return to the gulf, remarks that rattled commodities markets and helped drive up oil prices.

White House Press Secretary Jay Carney responded to a warning by Iran's army chief that an American aircraft carrier should not return to the Persian Gulf.

Iran tested two long-range missiles on the last day of its naval exercises. The country is threatening to shut down the Strait of Hormuz, which would cut off a large percentage of the world's oil supply.

The proposed legislation suggested that at least some Iranian officials are serious about trying to stop the U.S. Navy from entering the oil-rich gulf waters. Iranian analysts said the bill probably would not have been introduced if it were not supported by higher authorities.

“If the military vessels and warships of any country want to pass via the Strait of Hormuz without coordination and permission of Iran’s navy forces, they should be stopped by the Iranian armed forces,” Fars quoted lawmaker Nader Qazipour as saying in explaining the bill. He noted that Iran regards the strait as part of its territorial waters and said the bill would be presented to parliamentary leaders next week.

The news agency, which has ties to Iran's Revolutionary Guard Corps, claimed that the carrier USS John C. Stennis, which steamed out of the Persian Gulf last week, had escaped while being “chased by Iranian warships.”

The United States has dismissed as overblown rhetoric Iran’s threats to close the strategic Strait of Hormuz, the narrow entrance to the Persian Gulf, in retaliation for Western sanctions over its uranium-enrichment program.

The increasingly bellicose tone from Tehran has coincided with a currency crisis that has forced the government to intervene to prop up the ailing rial. Helping to drive the rial to record lows was U.S. legislation signed Saturday by President Obama that includes a provision for unilateral sanctions against Iran’s central bank.

Iran responded by injecting an additional $200 million into the country’s currency markets Wednesday, Fars reported. While the rial’s rate appeared to stabilize, people involved in trading dollars said they were hanging onto their foreign currency for now.

Many Iranians were trying to buy dollars anyway, but sellers were hard to find.

“Nobody is selling their dollars,” said one exchange office representative who did not want to be identified. “The current rate is artificial.”

The crisis spurred rumors that the job of Central Bank Governor Mahmoud Bahmani was in jeopardy. According to Fars, he has asked for more authority to clamp down on “speculation” against the rial.
Posted by Steve Douglass at 12:13 PM No comments: 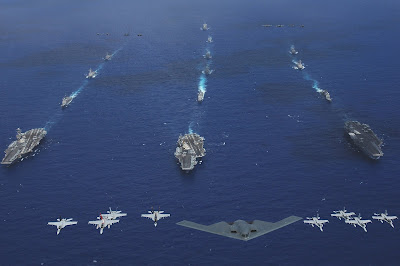 (CNN) -- Iran warned the United States Tuesday not to return a U.S. aircraft carrier "to the Persian Gulf region."

U.S. officials rejected the "warning" and another recent threat from Tehran that it could close the Strait of Hormuz. The White House and U.S. State Department called the latest threats signs that sanctions against Iran, the result of a standoff over its nuclear activities, are working.

"The Islamic Republic of Iran will not repeat its warning," said Maj. Gen. Ataollah Salehi, commander of Iran's Army, according to the state-run news agency IRNA.

Salehi "said the country will not adopt any irrational move but it is ready to severely react against any threat," the report added.

Iran was referring to the USS John C. Stennis, part of the U.S. Navy's fleet in the region. It moved last week from the Persian Gulf into the North Arabian Sea, as part of what the Navy's 5th Fleet called a pre-planned transit.

Iran said the ship's movement during Iran's naval exercises showed that the United States "understood" that Iran's maneuvers were not "suicidal or aggressive," but rather about Iran protecting its own "interests and power."

But Western diplomats last week described the naval drills -- which, according to Iranian officials, included test-firing missiles -- as further evidence of Iran's volatile behavior.
Iran's naval exercises began in the strait and also included waters in the Sea of Oman and the Indian Ocean up to the Gulf of Aden, according to IRNA.

After Tuesday's warning from Iran, a Pentagon spokesman issued a statement saying "deployment of U.S. military assets in the Persian Gulf region will continue as it has for decades."
"These carrier strike group deployments are necessary to maintain the continuity and operational support to ongoing missions in the U.S. Central Command area of responsibility," George Little said.
The United States has had forces in the Persian Gulf since World War II.

Its ships sail through the Persian Gulf frequently, many on their way to and from the 5th Fleet's headquarters in Bahrain. The 5th Fleet's area of responsibility covers about 2.5 million square miles, including the Persian Gulf, which the Navy also refers to as the Arabian Gulf; the Red Sea; the Gulf of Oman and parts of the Indian Ocean.

The dispute over the Stennis began last week. Tehran said an Iranian warplane identified a U.S. carrier patrolling the area of the drills. State-run media showed a picture of the vessel.
Iran's state-run Press TV said Tuesday the images it showed last week were of the Stennis.
Tuesday's events came amid growing tensions over the Strait of Hormuz, a critical shipping channel.
Iran last week threatened to block the strait if sanctions are imposed on its oil exports. France, Britain and Germany have proposed sanctions to punish Iran's lack of cooperation on its nuclear program.

Cmdr. Amy Derrick Frost, spokeswoman for the 5th Fleet in Bahrain, responded at the time, "Anyone who threatens to disrupt freedom of navigation in an international strait is clearly outside the community of nations; any disruption will not be tolerated."

In his statement Tuesday, Pentagon spokesman Little said the Navy "operates under international maritime conventions to maintain a constant state of high vigilance in order to ensure the continued, safe flow of maritime traffic in waterways critical to global commerce.

"Our transits of the Strait of Hormuz continue to be in compliance with international law, which guarantees our vessels the right of transit passage. We are committed to protecting maritime freedoms that are the basis for global prosperity; this is one of the main reasons our military forces operate in the region."

The dispute has been pushing up oil prices. Nearly 17 million barrels of oil a day pass through the strait, according to the U.S. Energy Information Agency. "Flows through the Strait in 2011 were roughly 35% of all seaborne traded oil, or almost 20% of oil traded worldwide," the agency says.
"No one in this government seeks confrontation over the Strait of Hormuz," Little said. "It's important to lower the temperature."

But closing the strait would require means that likely are not available to Iran, said Jean-Paul Rodrigue, an expert in transport geography at Hofstra University. "At best, Iran can posture and potentially disrupt traffic for a short duration," he said.

China and Japan are more dependent on Persian Gulf oil than the United States is, he said, and he added that any move to close the strait would be "suicidal" to the current regime.
Posted by Steve Douglass at 6:06 AM No comments: