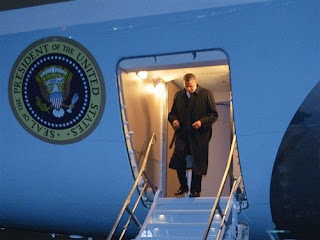 Secret rendezvous in the dark of night
News organizations who were a part of the traveling press pool covering the president's surprise Afghanistan visit -- a small group of reporters, producers and photojournalists designated to be the eyes and ears of the White House press corps during such clandestine trips -- were part of the secrecy and complied with the White House's request to hold off on reporting the information until the president was safely in Kabul, according to White House pool reports.
Hours earlier, reporters had secretly gathered at a remote parking area at Joint Base Andrews outside Washington, had all their electronic gear confiscated -- cell phones, laptops, cameras, "anything that might have tracking software" -- and were driven by bus to a darkened Air Force One waiting in the shadows on the tarmac.
After an 11-hour flight, the media -- and the president -- found themselves in a steep descent into Bagram Air Field in Afghanistan, the official modified Boeing 747 still shrouded in darkness. On trips such as these, it is safest for the president to land and takeoff under cover of night.
"We landed at Bagram Airfield at 1020p local and got onto Chinook helicopters that were waiting with rotors spinning," reported pool producer Richard Coolidge of ABC News. "The short flight to Kabul was also in blackout -- no use of any flashlights or even phones due to their backlit screens. Pilots and gunners used night vision goggles."
Within hours, Obama and Afghan President Hamid Karzai had signed a Strategic Partnership Agreement, setting the framework for a U.S. military presence in the war-torn nation for the next decade. Then, Obama addressed cheering troops at Bagram, spoke to the nation in a live remote address and was wheels-up, safely clearing Afghan airspace.
"AF1 is blacked out as it was on arrival with shades down. But the increasing light limits the value of that precaution," reported the press pool. "We are on AF1 and rolling 425a local 755 pm ET."
Total time on the ground was six hours and five minutes.
White House plugging holes
The early reports of the president's Afghanistan trip sent White House National Security Council spokesman Tommy Vietor scurrying to douse the rumors. According to the website BuzzFeed, that outlet agreed to the White House request and pulled its report after Vietor called around 9:33 a.m. The New York Post followed suit, removing its story hours later.
Vietor did not respond to CNN's request for comment.
"It wasn't that hard a call," BuzzFeed editor-in-chief Ben Smith told CNN. "There's an appropriate tradition of deferring to White House and military requests to delay -- not spike -- a story when they believe people in a war zone could be in danger."
"And a plane in the air above Afghanistan, the situation, as we later learned, is a pretty clear case of that," Smith added. "Vietor's narrow denial also telegraphed the situation to media watchers paying close attention."
But media experts acknowledge the press has to walk a fine line between the need to get the news out and the safety of the president.
Journalists must often ask themselves the question "what does the public need to know and when do they need to know it," said Al Tompkins, a senior faculty member at The Poynter Institute for Media Studies, a media training organization in St. Petersburg, Florida.
Tompkins said that in the harried and hypercompetitive world of reporting via social media, outlets sometimes reason that a competitor's scoop signals a green light to rush ahead with news. This is a dangerous precedent when national security is concerned, he said.
"No, you can't unring the bell, but you can stop ringing it," Tompkins said.
READ THE FULL STORY AT CNN
Posted by Steve Douglass at 9:30 AM No comments:


Federal and local authorities have stepped up security in New York City today as a precaution on the anniversary of al Qaeda leader Osama bin Laden's death one year ago today, law enforcement officials told ABC News.
Though officials say there are no known threats centered on New York City -- the metropolis that suffered a majority of the casualties of the 9/11 attacks when the World Trade Center buildings fell in 2001 -- 240 federal, state, city and transportation police have been deployed to major transportation hubs like Grand Central Terminal and Times Square with heavy weapons, radiation detectors, bomb sniffing dogs and other equipment, authorities said.
The officials said the surge will include National Guard forces and Transportation Security Administration agents.
Beyond New York City, security officials in the U.S. and abroad are watching U.S.-bound flights carefully amid fears terrorists could attempt to smuggle explosives onto planes by actually hiding them inside their bodies. As ABC News reported Monday, security at several airports in the U.K. and elsewhere in Europe and the Middle East has been substantially stepped up, with a focus on U.S. carriers.
Additional federal air marshals have also been shifted overseas in advance of the anniversary. While President Obama announced bin Laden's death to the world on the night of May 1, 2011 in the U.S., it was already May 2 in Pakistan when the terror leader was killed by an elite team of U.S. Navy SEALs.
In public, U.S. officials say there is no credible information of an impending attack. Department of Homeland Security spokesman Peter Boogaard released a statement Monday evening saying, "We have no indication of any specific, credible threats or plots against the U.S. tied to the one-year anniversary of bin Laden's death."
READ THE REST OF THE STORY AT ABC NEWS
Posted by Steve Douglass at 9:19 AM No comments:

Celebrating one year since this scumbag was taken out 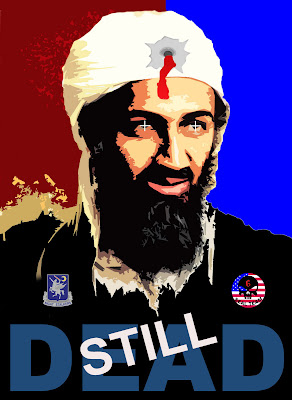 Special thanks to  Seal Team Six -and 160th SOAR!
Posted by Steve Douglass at 8:37 AM No comments: