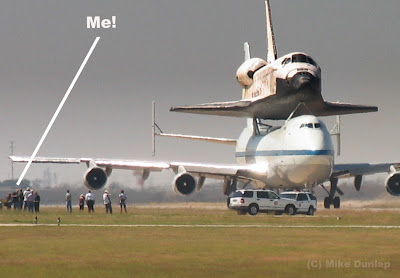 I had a few e-mails from a few visitors to this blog wanting a few details about the space shuttle photography, camera and lenses used etc .

They also wanted to know how I was able to get so close.

Two reasons - the long runway (13,502 feet long) was originally Amarillo AIr Force Base. It was designed as a SAC runway that could survive a nuclear war and for use by SAC's big bombers. At one time they considered basing the B-70 bomber in Amarillo, but the bomber itself never came to be.

Second reason it was the home to Commander Rick Husband - who died a hero when Columbia was destroyed.

Not to mention many NASA aircraft still use the runway (as Rick did) for practice approaches and as such holds a special place in many of the hearts of high-ranking officers in NASA.

What better way to thank Amarillo's favorite son than to fly the space shuttle in for a quick turn and public look-see? 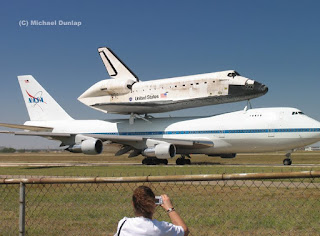 Most of the shots were taken with my venerable Nikon D-70s. I also used my Canon Pro-1 but haven't uploaded those photos yet.

Lenses were a Nikkor 18mm to 70mm ED Zoom lens (for the wide shots) and a Nikkor 70 to 300mm for the telephoto shots.
I also use a a graduated neutral density filter to keep the bright sky from washing out.

ISO was 50 set for maximum color saturation and minimum noise.

As for access: Rick Husband International Airport in Amarillo is a public facility, and the general public could shoot from behind the perimeter fence which did afford them a pretty good view. 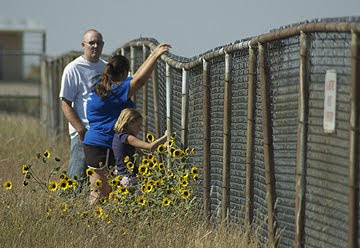 Here's another shot of some locals shooting from behind the English Field House restaurant. 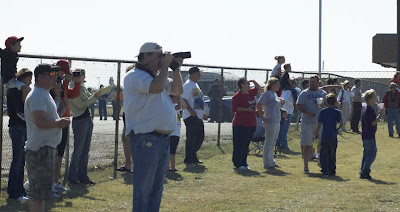 However, because of the Bell/Textron MV-22 plant on the airport grounds (making it a DOD protected facility) security was more than evident.


They were however very approachable and friendly. The mood was a celebratory one but muted with most minding their manners giving security no reason to be on alert.

No on (not even the local press) were allowed behind the perimeter fence.

No press passes were issued, and my repeated requests for one (days in advance) fell on deaf ears.

In fact airport security and administration played dumb and acted like (on the phone at least) like they hadn't received any word the shuttle ferry flight would be refueling in Amarillo and tried their best to fein surprise. It was only after the flight plan for NASA 911 popped up on FlightAware that they came forth and told admitted it was on its way.

Once the local media started calling, they denied everyone access except some local dignitaries and airport maint staff.

However, private and corporates pilots who had hangared aircraft at the airport were not restricted from opening up their hangars and shooting photographs from the aprons in front of their hangars. 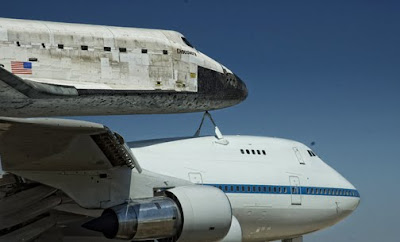 Some over enthusiastic photographers ( like some nimrods from the local paper) did cross the line and they were warned repeatedly by security but never no one was asked to leave. 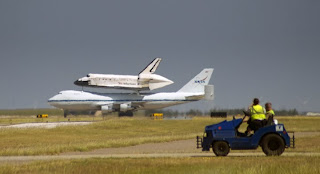 Note: the local Amarillo Globe News newspaper photographers (especially the two in the photo below ) with no regard for others kept rudely walking in front of the other photographers blocking their shots. 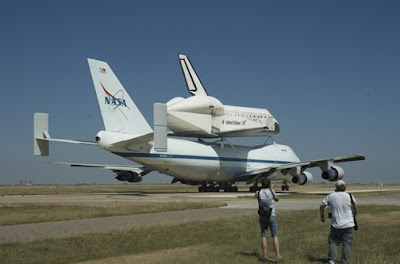 They had these big hunks of glass hanging from their cameras (500mm or better) which they apparently didn't know how to use because their photos sucked.

The first ones that were posted (the long telephoto shots) were underexposed, out of focus and filed with spots (dirty sensors) but have since then been replaced with cute people-pleasing crowd shots.

I know it sounds like I'm ragging on the AGN photogs, but I have a right to.

I was one for almost ten years and would have never acted like they did.

Now this is when a weirs synchronicity kicks in:

I've photographed the shuttle in orbit many times (from the ground) and (tragically) documented the last fiery final plunge of the space shuttle Columbia as it broke up over Texas killing Amarillo native Rick Husband who the airport was named for.

I went to Crockett Junior High with Rick and (although I didn't know him well) he once asked me if I wanted to fly in a sailplane with him.

I asked mom - but she said no. I was just a teen at the time.

Since then (even as we both grew-up and went our separate paths) I'd would occasionally bump into Rick from time to time, both of us being drawn to aviation oriented events like air-shows and such. We'd chat for a bit and then go our separate ways again.

When I heard he had been selected to fly the shuttle I was one of the few who could honestly say "I knew him when."
I just wish I had known him better.

It was an ironic twist, I'd be the one on the ground photographing what may have well been the last few seconds of his life.

That was a tragic day.

Never-the-less, I could never have imagined I would be shooting photos of the Space Shuttle at an airport named in his honor.

A statue of Rick greets fliers in the airport terminal building less than a thousand yards away from where I was shooting. 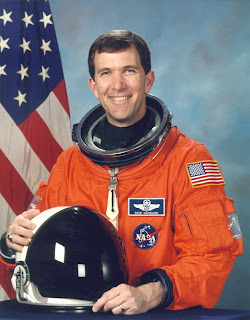 As it passed by I couldn't help but think of Rick (and admittedly choked up - just a bit) when this magnificent technological achievement rolled by me on the taxi-way less than sixty feet away.

I don't have words to describe the feelings.

After the double-decker dynamic-duo roared back into the sky (the very same sky that had claimed Columbia and Rick Husband) i heard over my scanning radio - a short quiet phrase - transmitted by the pilot of the 747 that couldn't help but make me a bit misty.

Soon the shuttle will be retired and relegated to history.

That will be another sad day for me, but today wasn't. it was one of the most amazing experiences of my life!

Special thanks to my brother Paul, Daryl, the two Michaels, and my source at NASA who alerted me (way in advance) which made everything possible. 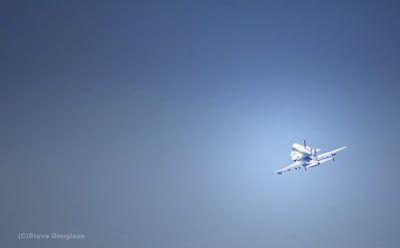