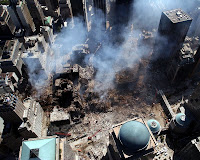 (CNN) -- Newly released text messages reportedly from the morning of September 11, 2001, show panicked family members trying to contact loved ones and officials frantically trying to grasp what was happening.

More than half a million messages, released by whistleblower site Wikileaks, reveal the panic, horror and pain of what happened that morning in the words of those who experienced it.

On September 11, 2001, 19 hijackers commandeered four commercial jetliners, loaded with fuel for cross-country flights. Two were flown into the World Trade Center's Twin Towers in New York, one crashed into the Pentagon, and another, headed for an unknown location, crashed in Pennsylvania when it was disrupted by passengers.

A total of 2,976 people -- not including the hijackers -- were killed in the attacks.
Some people witnessing the attacks reached out to loved ones out of fear there might have been more attacks coming and they might die.

"The only thoughts I have are of Nicholas, Ian and you," read one text message. "I am terrified. I needed to tell you that I truly love you. always, diane."
"I want to hold you now," one text message a minute later reads.
"I know you have a new relationship and do not care about me. But just in case anything happens know I love you hon. Missed Ya good bye."

The first indication of a problem comes at 8:50 a.m., five minutes aft.er the first plane hit the World Trade Center.
"An aloha call is starting. This is for a fire at 2wt ..."
Video: 9/11 text messages


Another text message references "a bomb detonation" in the World Trade Center and asks recipients of the message to report back assessments of their areas.
A minute later, firsthand reports started flooding in.

"The world trade center has just blow up, we seen the explosion outside our windows. Teresa ..."
At 8:53 a.m. a message from the New York Police Department's operations division mobilizes officers toward the World Trade Center, telling them to meet at Church and Vessey streets.
At 9:03 a.m. the second plane hit the World Trade Center.
"It's a deliberate attack ... a second plane just few into the second tower," a message said 52 seconds later.

By 9:25 a.m. the personal messages have grown more frequent and more frantic.
Companies begin sending out messages asking for head counts on all employees.
People begin sharing reports of what they are seeing and hearing on TV, including early reports of people jumping from the World Trade Center.

Family members panicked, struggling to get through jammed phone lines to find out if their loved ones were OK.
9:25:40 a.m.

"Please call my work as soon as you get in the office. Need to know you're safe."
9:29:38 a.m.
"Wondering where you are. Are you okay. Give me a call back asap. I just need to know these things. Even if it's collect. Call me. Darryl"
11:32:56 a.m.
"if i do not hear from you by high noon, i am going to pick laura up at school and tell her her father is dead."
"goodbye my sweety.....im going to miss yo," another said.
"Honey wanted to tell you how much i love you," one sender wrote. "I was a little worried. I Don't want to lose you now that I got you back. You mean everything to me. You have my whole heart and life. I love you so much."

"My dad survived! I got a call from stepmom's coworker saying my dad is alive, although that is all the info I have. I do not know if he is injured or unscathed."
"Abroer's father is alive," one text proclaims. "survived WTC collapse. I am trying to contact family members to find out more."
"urgent. It's tim. I'm okay. Call me at home...i was outside the building when it exploded, but i'm fine."
Others have to wait and worry. Numerous messages simply read: "Are you okay?" "Where are you?" or "CALL ME NOW!"
"pete is ok. He can't find his brother who works in the world financial center next to the trade center....." one message read.

The messages also give insight to the federal government's scramble to evacuate buildings, bases and high-level officials.
"Jim: DEPLOY TO MT. WEATHER NOW! Tom" reads one message, referring to Mount Weather, the underground bunker where high-level officials are taken in a national emergency and a command facility for the Federal Emergency Management Agency.

SEALs accused of assaulting alleged terrorist: "Three Navy SEALs are facing court-martial in connection with the alleged assault and mishandling of a detainee they captured in Iraq in early September, military officials said.The military provided few details of the circumstances, but a source with knowledge of the investigation confirmed for Navy Times that the detainee was Ahmed Hashim Abed, the alleged planner of the March 2004 ambush, killing and mutilation of four Blackwater contractors in Fallujah.‘That’s why [the SEALs] went after him,’ the source said, who asked not to be named. He noted that the takedown was ‘kinetic’ but there was no gunfire. ‘[Abed] had a gun. The intel was perfect. No shots were fired.’The three SEALs — Special Warfare Operators 2nd Class Matthew McCabe and Jonathan Keefe, and SO1 Julio Huertas — will be arraigned Dec. 7 in a military court in Norfolk, Va., said Army Lt. Col. Holly Silkman, a spokeswoman with U.S. Special Operations Command Central.

None of the SEALs is confined, she added.The source said the charges stem not from the capture itself — which have a high potential for violence — but from later on, when Abed was under detention.‘If they really wanted to [beat] him that was the time do it,’ during the capture, the source said. ‘That’s why this is so ridiculous.’The charges were first reported by Fox News, which posted a story on its Web site Tuesday. The source confirmed that Abed was known by the military code ‘Objective Amber,’ but could not say if the capture went down in the city of Fallujah or in the outlying area.The source said the allegations began when a master-at-arms sailor assigned to guard Abed told a SEAL platoon commander that one of the operators had punched Abed in the stomach.‘This was reported by the SEAL platoon commander to the chain of command,’ he said.The SEALs have been assigned military attorneys to defend them in the cases, which will be tried separately as special courts-martial.One defense attorney said the SEALs refused to accept nonjudicial punishment, which are administrative actions that some in the military may consider as an admission of guilt.Neal Puckett, a defense attorney who is representing McCabe, said the SEALs are being essentially charged for allegedly giving the detainee ‘a punch in the gut.’They are expected to plead not guilty when they appear at their December arraignment, he said.

‘They are all together, and they all maintain that they are innocent of these charges,’ said Puckett, a retired Marine Corps lieutenant colonel and judge advocate.The SEALs were on the tail-end of their deployment to Iraq when the alleged incident happened, he said.McCabe’s special court-martial is slated to begin Jan. 19, he said.Huertas, 28, is from Blue Island, Ill., and enlisted in 1999. He has served in special warfare units since 2002. He has an Iraq Campaign Medal and was advanced to E-6 in June 2006, Navy records show.Keefe, 25, is from Yorktown, Va., and enlisted in 2006. He began SEAL training the same year, Navy records show. He was last advanced in June 2008.McCabe, 24 is originally from Perrysburg, Ohio, and enlisted in 2003. He served on the Amphibious Assault Ship Belleau Wood before training in special warfare. He was advanced in September 2007, Navy records show."

The Predator crashed after operators lost contact with the plane over southern Afghanistan. Investigators are looking into why the radio link was lost and at other factors involved.There is no indication that enemy fire brought the plane down, a statement said.The Air Force lost 18 Predator and MQ-9 Reaper unmanned aerial vehicles in fiscal 2009. The Nov. 21 crash was the first reported since fiscal 2010 began Oct. 1."

Posted by Steve Douglass at 3:31 PM No comments: