F-22 crashes on highway in Florida. 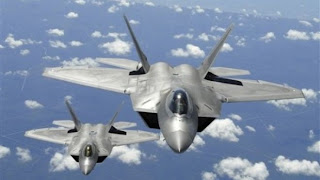 TYNDALL AIR FORCE BASE, Fla. — An Air Force F-22 Raptor fighter jet crashed near a Florida Panhandle highway Thursday, but the pilot was able to eject safely and there were no injuries on the ground, the military said.

The single-seat stealth fighter, part of a program that has been plagued with problems, went down Thursday afternoon near Tyndall Air Force Base, just south of Panama City on The Gulf of Mexico. The pilot received medical treatment and a section of Highway 98 that runs through the base was closed as rescuers responded.

The crash was on Tyndall land and no one on the ground was hurt, said Air Force Sgt. Rachelle Elsea, a spokeswoman for the base where F-22 pilots train.

The Air Force said the plane went down in a wooded area near the highway.
Posted by Steve Douglass at 7:33 PM No comments:

Israel at war with Hamas 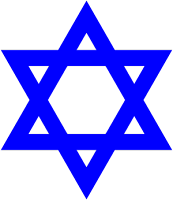 JERUSALEM –  Israel is in an all-out ground war with Hamas Thursday, as Israeli planes, tanks and gunboats pounded suspected militant positions in Gaza in retaliation for another day of Hamas rocket attacks that left at least three Israelis dead.

Prime Minister Benjamin Netanyahu told reporters on Thursday that Israel could no longer stand repeated attacks on its southern towns. He said that Israel has "made it clear" it won't tolerate continued rocket fire on its civilians.
Earlier, Netanyahu had declared, "If there is a need, the military is prepared to expand the operation. We will continue to do everything to protect our citizens."

The casualties were the first since Israel launched its operation on Wednesday with the assassination of Hamas' top military commander.

Police spokesman Micky Rosenfeld said two Israeli men and a woman died after a rocket struck their four-story apartment building in the southern Israeli town of Kiryat Malachi. A 4-year-old boy was seriously wounded and two babies slightly injured in the strike.

Since the Israeli operation started, a total of 13 Palestinians, including four civilians, have been killed and more than 100 people wounded, according to Palestinian medical officials. Among the dead were two children.
Israelis and Gazans both holed up in their homes Thursday in anticipation of heavy fighting on the second day of the military's campaign.

The operation, launched after days of rocket fire from the coastal territory, was Israel's most intense attack on Gaza since its full-scale war there four years ago.
The Israeli military said the some 20 airstrikes were part of a major offensive dubbed "Operation Pillar of Defense," according to a Reuters report.

Israeli officials said Wednesday that a ground invasion was a strong possibility in the coming days if Hamas didn't rein in the rocket fire. Mid-morning Thursday, there was no sign such an invasion might be beginning. But the Israeli military was cleared to call up special reserve units -- a sign the operation might broaden.

"The military will continue acting to establish deterrence against Hamas and to return the calm," Defense Minister Ehud Barak said during a tour of southern Israel. He praised citizens for coping with the "tough moments to come."
Gaza schools were ordered closed until the operation ends, and most of the territory's 1.6 million people hunkered down close to home, venturing out only to buy food, fuel and other basic supplies.
Hamas announced a state of emergency in Gaza, evacuating all its security buildings and deploying its troops away from their locations.

Israeli aircraft dropped leaflets on several locations in Gaza early Thursday, warning Gazans to stay away from Hamas, other militants and their facilities.

Israel declared a state of emergency in the country's south, where more than 1 million Israelis live within rocket range, instructing people to remain close to fortified areas.

People living in areas along the frontier were ordered to stay home from work, save for essential services, and shopping centers were closed. Israeli police stepped up patrols around the country, fearing Hamas could retaliate with bombing attacks far from the reaches of Gaza.

Batya Katar, a resident of Sderot, a community that has been a frequent target of rocket fire, said streets were empty there.

"People won't be outside. The minute they assassinated the Hamas military chief we knew an offensive had begun. We were waiting for it, and it's about time they did it. We have the right to live like other countries in the world."
Many Gazans provided updates on their Facebook and Twitter accounts, providing news about airstrikes and rocket launches. Others shared prayers and called for militants to stand tough against Israel.

"My little 4-year-old boy keeps asking me to pray with him every 10 minutes, saying, 'Mama. Let's pray together to Allah in order to be safe,'" one woman, Ghadeer Ahmad, wrote on her Facebook account.
Palestinian leader Mahmoud Abbas cut short a trip to Europe to deal with the crisis surrounding Israel's military operation, according to Saeb Erekat, an aide to Abbas.

Erekat harshly condemned Israel's military operation, saying the Palestinians "hold Israel fully responsible for the consequences of this act of aggression."
Few in the Palestinian territory's largest urban area, Gaza City, came out following the call for dawn prayers on Thursday, and the only vehicles plying the streets were ambulances and media cars.
About 400 angry mourners braved the streets, however, to bury Hamas mastermind Ahmed Jabari, whose body was draped in the green flag of the Islamic militant Hamas movement. Some fired guns in the air and chanted, "God is Great, the revenge is coming."

When the body was brought into a mosque for funeral prayers, some tried to touch or kiss it. Others cried. Jabari was the most senior Hamas official to be killed since the last war in Gaza ended in early 2009. He has long topped Israel's most-wanted list, blamed for a string of deadly attacks, including the kidnapping of Israeli soldier Gilad Schalit in 2006.
The Israeli military said its aircraft targeted more than 20 facilities that served as storage or launching sites for rockets. Among the weapons destroyed were rockets that could hit as far as 25 miles into Israel.

The conflict has deepened the instability gripping the Middle East. Cairo recalled its ambassador in response to the military operation, which began just days after Israel was drawn into Syria's civil war for the first time.
In a statement read on state TV late Wednesday, spokesman Yasser Ali said that President Mohammed Morsi recalled the ambassador and asked the Arab League's Secretary General to convene an emergency ministerial meeting in the wake of the Gaza violence.

Israel and Egypt signed a peace accord in 1979. Relations, never warm, have deteriorated since longtime Egyptian President Hosni Mubarak was ousted in a popular uprising last year.

Egyptian Foreign Minister Mohammed Kamel Amr spoke with U.S. Secretary of State Hillary Rodham Clinton late Wednesday, asking for "immediate U.S. intervention to stop the Israeli aggression," the ministry said in a statement.
Amr told Clinton that if Israel's offensive does not stop, "matters will escalate out of control" and asked the U.S. "to use what contacts it has with Israel."

In Washington, the United States lined up behind Israel. "We support Israel's right to defend itself, and we encourage Israel to continue to take every effort to avoid civilian casualties," State Department spokesman Mark Toner said.
President Obama spoke with Netanyahu and the two men agreed Hamas needs to stop its attacks on Israel to allow tensions to ease, the White House said.

Obama spoke separately to Morsi, given Egypt's central role in preserving regional security, the White House said. The two men agreed on the need to de-escalate the conflict as quickly as possible.

U.N. Secretary-General Ban Ki-moon called for calm and urged both sides to respect international humanitarian law.
On Wednesday night, the U.N. Security Council met behind closed doors to consider an Egyptian request for an emergency meeting on Israel's military action in Gaza. The Palestinians asked the council to act to stop the operation.
For the past four years, Israel and Hamas have largely observed an informal truce. But in recent weeks, the calm has unraveled in a bout of rocket attacks from Gaza and retaliatory Israeli airstrikes. From Israel's perspective, Hamas escalated the situation with two specific attacks in recent days: an explosion in a tunnel along the Israeli border and a missile attack on an Israeli military jeep that seriously wounded four soldiers.
Outside the hospital where Jabari's body was taken, Hamas official Khalil al-Haya eulogized the commander and threatened Israel.

"The battle between us and the occupation is open and it will end only with the liberation of Palestine and Jerusalem," he said.

Thousands of angry Gazans chanted "Retaliation" and "We want you to hit Tel Aviv tonight."

Witnesses said Jabari was traveling in a vehicle in Gaza City when the car exploded. Crowds of people and security personnel rushed to the scene of the strike, trying to put out the fire that had engulfed the car and left it a charred shell. The Israeli military released a grainy, black-and-white video of the airstrike. It shows a sedan moving slowly along a road before exploding in a powerful blast that sent a large piece of the car flying into the air.
Dovish Israeli lawmaker Dov Hanin condemned the killing.

"Assassinating leaders is never the solution. In place of the leaders killed, others will grow, and we will only get another cycle of fire and blood," he said.
The Associated Press contributed to this report.
Read more: http://www.foxnews.com/world/2012/11/15/3-dead-after-gaza-rocket-strikes-southern-israel/#ixzz2CJ3WJBVe
Posted by Steve Douglass at 7:44 AM No comments:

Petraeus to testify behind closed doors on Benghazi 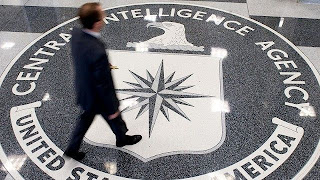 CBS NEWS: Gen. David Petraeus will testify before a House Committee on the Libya embassy attack Friday morning, despite the ongoing FBI investigation into an extramarital affair that led to his resignation as director of the CIA.

The hearing to be held by the House Intelligence Committee is closed to the public and the media. Petraeus is expected to answer questions about the CIA's knowledge and handling of the assault on the U.S. Consulate in Benghazi that left U.S. Ambassador Chris Stevens and three other Americans dead. Two of those Americans were with the CIA.

It was unclear at first whether or not Petraeus would testify at all on Capitol Hill at all, after he abruptly resigned from the agency amid news of his affair with biographer Broadwell. On Wednesday, before the House Intelligence Committee's announcement, the Senate Intelligence Committee said the retired General would testify to their committee at a separate hearing, though it's still unclear when he'll speak to the Senate panel.

Meantime, the House Intelligence Committee will hear from him at 7:30 a.m. on Friday, an hour that is extremely uncommon for a congressional meeting.

Congressional investigators get access to telegrams, intelligence reports, and classified emails as they interview top security and Pentagon officials. Sources tell CBS News' Margaret Brennan that intelligence officials will show footage from an unmanned surveillance drone that was overhead during the assault.

The Senate Foreign Relations Committee, which has oversight of the State Department, has already been briefed about the attack by Under Secretary Patrick Kennedy and Assistant Secretary for Diplomatic Security Eric Boswell.© 2012 CBS Interactive Inc. All Rights Reserved.

Posted by Steve Douglass at 6:52 AM No comments: