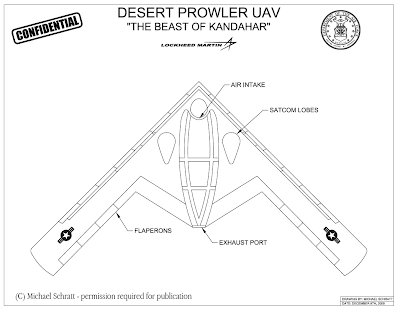 WSJ WASHINGTON—Iran said on Sunday that it shot down a U.S. stealth drone near the country's eastern border, but U.S. officials in Afghanistan said the craft could instead be an unmanned reconnaissance plane that veered off course and crashed last week.

U.S. and NATO officials wouldn't say what kind of American drone had disappeared, but U.S. officials said there was no indication that the aircraft had been shot down by the Iranians. One American official said the drone likely suffered from a mechanical failure.

American officials said they believe that after the remote pilots lost control of the aircraft, the drone crashed in an unknown location.

On Sunday afternoon, the North Atlantic Treaty Organization's command in Afghanistan said the Iranians may have been referring to an unmanned craft lost while flying a mission over western Afghanistan "late last week."

"The operators of the UAV lost control of the aircraft and had been working to determine its status," said the statement released by NATO's International Security Assistance Force.

The drone "suffered minor damage and is now in possession of Iran's armed forces," IRNA quoted the military official as saying.

The news agency reported that the official also warned of a strong response if the U.S. were to violate Iranian airspace.

Iran's assertion that it had shot down the drone wasn't the first such claim it has made.

In July, it said it shot down a drone near the city of Qom. In January, Tehran said its forces shot down drones in the Gulf.

U.S. officials rebutted those claims, and Tehran produced no evidence.

The RQ-170 Sentinel was the type of stealth drone used to conduct surveillance on the compound used by Osama bin Laden in Abbottabad, Pakistan, before the May raid by Navy SEAL commandos that killed the al Qaeda leader.

The U.S. has flown missions with the RQ-170 Sentinel from bases in Afghanistan, but most of its capabilities remain classified.

It is also known by a nickname, the "beast of Kandahar," earned when aviation enthusiasts first spotted the craft flying from Kandahar airfield in Afghanistan.

Defense analysts have speculated in the past that the Sentinel, built by Lockheed Martin Corp., was based in Afghanistan not just to conduct secret missions into Pakistan but also for surveillance of Iranian military sites.

The stealth drone was originally part of the Air Force's classified fleet and its existence was officially denied. But the service now makes available a fact sheet about the aircraft.

The drone is a wing-shaped aircraft, like the stealth bomber, a design that is supposed to make it less visible to radar.

The number of Sentinels that the Air Force operates remains a closely guarded secret.

The "RQ" designation is used for unarmed drones, such as the RQ-4 Global Hawk. But some analysts have said the U.S. might try to arm the airframe at some point in the future.

Iran claims to have its own fleet of unarmed drones, but U.S. officials question Tehran's ability to conduct even short-range reconnaissance with unmanned aircraft.

UPDATE:
Responding to the Iranian report, NATO command in Afghanistan released a terse statement Sunday: "The UAV to which the Iranians are referring may be a US unarmed reconnaissance aircraft that had been flying a mission over western Afghanistan late last week. The operators of the UAV lost control of the aircraft and had been working to determine its status."

The White House declined to comment but officials did not seem unduly alarmed, suggesting that the drone's capture would not provide Iran with significant information about U.S. surveillance technology and techniques.

The RQ-170 Sentinel is a high-altitude reconnaissance drone whose existence was revealed in 2009 by specialised reviews and later confirmed by the US Air Force in 2010.

In January, Iran announced that its forces had downed two US drones after they violated Iranian-controlled airspace.

It said it would put the aircraft on display to the public, but there has been no indication it ever did so.

In June, Brigadier General Amir-Ali Hajizadeh, the commander of the Guards' aerospace unit, said Iran had shown Russian experts the US drones in its possession.

"Russian experts requested to see these drones and they looked at both the downed drones and the models made by the Guards through reverse engineering," he said.

Hajizadeh did not specify how many US drones were shown nor give any details of the copies Iran was said to have made of the aircraft.

The US military and the CIA routinely use drones to monitor military activity in the region.

They have also reportedly used them to launch missile strikes in Yemen as well as in Afghanistan and in Pakistan's lawless tribal belt.

The latest report comes as relations between Pakistan and the US have hit a new low after 24 Pakistani soldiers were killed in an air strike near the Afghan-Pakistani border last month, prompting Pakistan to boycott Monday's Bonn conference on Afghanistan's future.

It also comes at a time of heightened political tension over Iran's nuclear programme, with speculation rife that Israel is mulling air strikes against Iranian atomic facilities, with or without US backing.

Iranian officials and Guards commanders, who regularly boast about Tehran's military capabilities, have warned against any such military action targeting the Islamic republic.

UPDATE: LA TIMES: Some initial reports out of Iran suggested the drone had been shot down. But the semiofficial Fars news agency, which is close to Iran's Revolutionary Guard, quoted a military official as saying that Iran's electronic-cyber warfare unit had managed to take control of the aircraft and bring it "under their possession."

The official told Fars that Iran's response "will not be limited to the country's borders."

Iranian officials identified the aircraft as an RQ-170 Sentinel stealth drone, which is made by Lockheed Martin. The United States has not confirmed using the Sentinel, although at least one was reportedly monitoring Osama bin Laden's compound in Pakistan during the raid that killed the Al Qaeda leader in May.

Iranian news agencies did not immediately publish images of the allegedly downed craft. 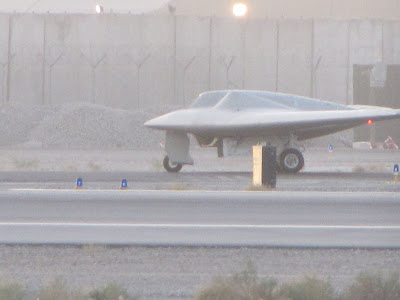 UPDATE YAHOO NEWS: The United States Air Force acknowledged in October that a computer virus had infected the computer system at Creech Air Force base in Nevada that is used to remotely operate Predator and Reaper drones. In 2009, an Iraqi insurgent hacked into a U.S. drone down-link, which is not usually encrypted, cyber security expert James Lewis, a former Reagan administration official with the Center for Strategic and Institutional Studies, told Yahoo News last month.

"Senior defense and intelligence officials said Iranian-backed insurgents intercepted the video feeds by taking advantage of an unprotected communications link in some of the remotely flown planes' systems," the Journal report said. "Shiite fighters in Iraq used software programs such as SkyGrabber -- available for as little as $25.95 on the Internet -- to regularly capture drone video feeds, according to a person familiar with reports on the matter."

The unarmed stealth drone Iran claims to have brought down, the RQ-170 Sentinel, is manufactured by Lockheed Martin's Advanced Development Program, based in Palmdale, California.
Until 2009, the U.S. Air Force would say little about the model, despite reported sightings of it on the tarmac at Kandahar International Airport, Afghanistan since 2007.

A December 2009 photo of the RQ-170 posted on aviation websites, however, prompted the Air Force to at least acknowledge the plane's existence, Military Times' Michael Hoffman reported in 2009:

"For two years, the RQ-170 has been the Air Force's Bigfoot," Hoffman wrote. "Photos and drawings of the stealthy UAV, also called the 'Beast of Kandahar,' have surfaced, producing shrugs and no-comments from service officials. In early December, a clear photograph of the jet's left side appeared on aviation Web sites, perhaps prompting the Air Force to 'fess up."

However, Air Force officials have not explained what the stealth aircraft is doing in Afghanistan given the fact that the Taliban has no air force or radar, Hoffman noted.

"Experts such as Phil Finnegan, a UAV analyst at the Teal Group, an aerospace consulting firm, suggest the stealth capabilities are being used to fly in nearby countries," Hoffman wrote. "Neighboring Iran has an air force and air defense system that would require stealth technology to penetrate."

The RQ-170 was also reportedly used in U.S. surveillance surrounding the U.S. raid that killed Osama bin Laden in Abbottabad, Pakistan last May.

The RQ-170 reportedly does not use the most sophisticated U.S. military technology because as a single engine UAV, it was judged to have a higher likelihood of occasionally going down.
Posted by Steve Douglass at 9:03 AM No comments: