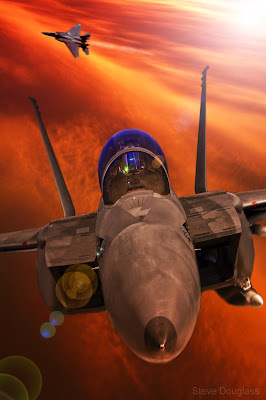 Boeing hopes to extend the life of its F-15 production line with the unveiling of a new variant to incorporate stealthy coatings and structures.

The current F-15 backlog is 38 aircraft, with deliveries to both Singapore and South Korea pending. The production rate is about 12 per year, and that can be increased depending on demand.

Orders remain strong for the F/A-18E/F and EA-18G made here; they are expected to carry through 2014, including deliveries to the U.S. Navy and Australia.

St. Louis is also the site of manufacturing for the T-45 and some C-17 structures; but the C-17's future is murky, and the program has survived only with congressional intervention.

The idea behind the Silent Eagle is to capture orders from existing F-15 countries by adding what Boeing officials say are inexpensive modifications to the aircraft. But they say they're not targeting the market already served by the F-35 and F-22.

Stealthiness for the F-15 was explored about a decade ago for the U.S. Air Force as an alternative to the F-22, but it was dashed once the twin-engine Lockheed Martin Raptor program took root.

The Silent Eagle's main addition is the incorporation of a new conformal fuel tank (CFT) under either wing designed to carry weapons internally. "The internal carriage is what is new. The stealth is not," says Brad Jones, F-15 future programs director, adding: "We are not really after the F-22 or F-35 markets" with this new design.

Mark Bass, F-15 program manager, says the Silent Eagle configuration can be used for first-day strike operations that require stealth. The modified CFTs can be removed, and the original tanks outfitted with weapon pylons can be remated to the aircraft within about 2 hr. to conduct missions in permissive airspace. This configuration would allow use of the standard F-15 weapons suite, including larger antiship missiles.

Posted by Steve Douglass at 4:02 PM No comments:

Uncertainty Surrounds North Korea Launch: "U.S. commanders are unsure whether the country plans to orbit a communications satellite or test an offensive missile."

Posted by Steve Douglass at 3:59 PM No comments:

U.S. Navy vessels collide near Iran: "A U.S. Navy submarine collided with a Navy amphibious ship Friday in the Strait of Hormuz, mildly injuring 15 sailors, according to the commander of the U.S. Fifth Fleet.

Posted by Steve Douglass at 3:59 PM No comments:

CNN) -- Ten U.S. Muslim organizations threatened this week to cease working with the FBI, citing "McCarthy-era tactics" by the agency, including efforts to covertly infiltrate California mosques.
Stephen Tidwell, then of the FBI's Los Angeles office, speaks at the Islamic Center of Irvine in 2006.

The FBI declined to comment on specific allegations but called the proposed move unproductive.

"Limiting honest dialogue, especially when complex issues are on the table, is generally not an effective advocacy strategy," spokesman John Miller said in a statement. "The FBI has continued our outreach efforts, across the board, with a number of concerned groups and where we agree -- or disagree -- most have concluded the best results are achieved through continued conversation. We believe that, too."

The statement was issued by the American Muslim Taskforce on Civil Rights and Elections, whose director, Agha Saeed, couldn't immediately comment because of a family emergency.

The FBI has sent "agents provocateur" into California mosques, according to the statement, which says an FBI agent threatened to make one mosque member's life a "living hell" if he did not become an informant.
Statement's Signatories

The following groups signed the statement threatening to cut ties with the FBI:

Though the statement does not name the mosque member, the Council on American-Islamic Relations said last month it would seek an investigation into the February 21 arrest of Ahmadullah Niazi, an Afghanistan native.

"Mr. Niazi previously reported to [CAIR's Los Angeles office] and other community members that, during a raid of a friend's house, an FBI agent urged Mr. Niazi to work with the agency, saying that if he refused to cooperate his life would be made a 'living hell,' " a news release said.

Niazi, a member of the Islamic Center of Irvine, told CAIR his arrest was retaliation for his refusal, the release said.

The FBI directed questions about Niazi's arrest to the U.S. attorney's office in Los Angeles, California, which declined comment.

Niazi, 34, was indicted last month on charges of perjury, procuring naturalization unlawfully, using a passport procured by fraud and making false statements. A search warrant for Niazi's Tustin, California, home said Niazi became a naturalized citizen in 2004 and made false statements about his past aliases and international travel.

He also made false statements about contact with his brother-in-law Amin ul-Haq, the indictment said. Ul-Haq is said to be Osama bin Laden's security coordinator and has been labeled a "specially designated global terrorist" by the U.S. government, the indictment said.

An FBI agent said in open court that Niazi also had discussed terrorist plots with an undercover informant, according to media reports. Niazi has pleaded not guilty to the charges against him.

CAIR's problems with the FBI began before Niazi's arrest. Last year, the FBI discontinued its "formal contact" with CAIR.

The Tuesday statement said the FBI unjustly designated CAIR and other organizations as "unindicted co-conspirators" in the Holy Land Foundation case. A jury convicted Holy Land Foundation leaders last year of conspiring to support terrorism and launder money for a terrorist group.

"Making this unjust designation public violates the Justice Department's own guidelines and wrongly implies that those listed are somehow involved in criminal activity," the statement said.

The FBI's Miller declined to comment on specifics, but said the FBI wants to avoid "formally constructed partnerships" with CAIR.

"Our concerns relate to a number of distinct narrow issues specific to CAIR and its national leadership," Miller said.

Before the FBI severed formal ties, CAIR officials had met with the FBI to discuss hate crimes targeting Muslims. On occasion, CAIR offered assistance in investigations. The group also held training sessions for FBI agents on Islamic culture and ways to improve interactions with the Muslim community.
Don't Miss

CAIR this week called the FBI allegations a "campaign of smears and misinformation," a remnant of the Bush administration.

"It is not surprising that we would be targeted in a purely political move by those in the previous administration who sought to prevent us from defending the civil rights of American Muslims," said a statement from the group's national communications director, Ibrahim Hooper.

Unless the FBI affords fair treatment to all mosques, Muslims and Muslim groups, the statement said, Muslims should consider suspending ties to the agency.

"This possible suspension, of course, would in no way affect our unshakable duty to report crimes or threats of violence to our nation," it said.
Posted by Steve Douglass at 1:03 PM No comments: