Edward Snowden is at a Moscow airport, and no, you can’t have him.
Russian President Vladimir Putin gave the first official acknowledgment of the whereabouts of National Security Agency leaker Edward Snowden yesterday, and promptly rejected U.S. pleas to turn him over. 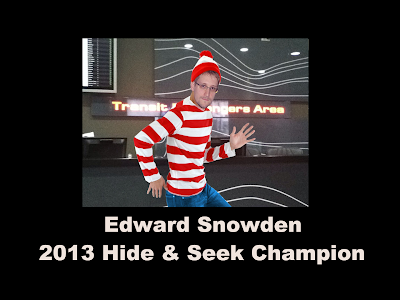 Snowden, who is charged with violating American espionage laws, fled Hong Kong over the weekend, touching off a global guessing game over where he went and frustrating U.S. efforts to bring him to justice.
Putin said Snowden is in the transit zone of Sheremetyevo Airport and has not passed through Russian immigration, meaning he technically is not in Russia and thus is free to travel wherever he wants.
After arriving Sunday on a flight from Hong Kong, Snowden registered for a Havana-bound flight Monday en route to Venezuela and then possible asylum in Ecuador, but he didn’t board the plane.

Speculation has been rife that Russian security services have been talking to Snowden and might want to keep him in Russia for a more thorough debriefing, but Putin denied that.
“Our special services never worked with Mr. Snowden and aren’t working with him today,” Putin said at a news conference during a visit to Finland.

Because Moscow has no extradition agreement with Washington, it cannot meet the U.S. request, he said.

“Mr. Snowden is a free man, and the sooner he chooses his final destination the better it is for us and for him,” Putin said. “I hope it will not affect the businesslike character of our relations with the U.S., and I hope that our partners will understand that.”
Secretary of State John Kerry said yesterday that the United States wants Russia to show respect for the rule of law and comply with common practices when it comes to fugitives from justice.

Putin’s staunch refusal to consider deportation shows his readiness to further challenge Washington at a time when U.S.-Russian relations are already strained over Syria and other issues, including a Russian ban on adoptions by Americans.

“Just showing America that we don’t care about our relations, we are down to basically a Cold War pattern: The enemy of your government is our friend,” said Masha Lipman of the Carnegie Moscow Center.
“The Russian administration has not come that far, but we don’t know what it’s up to,” she said.

Despite Putin’s denial, security experts believe Russia’s special services wouldn’t miss the chance to question a man who is believed to hold reams of classified U.S. documents and could shed light on how the U.S. intelligence agencies collect information.
Posted by Steve Douglass at 7:59 PM No comments: